RAMALLAH, May 20 2010 (IPS) - Israeli settlers are beginning to feel the bite of an economic boycott campaign launched by the Palestinian Authority (PA) against goods produced in the illegal Israeli settlements dotting the occupied West Bank. 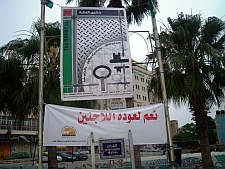 Posters in Ramallah mark 62 years of the 'Nakba' when Israel was established, causing Palestinians to flee. Credit: Mel Frykberg/IPS

“This is economic terrorism,” complained the Yesha Council (YC), an umbrella organisation of municipal councils of Jewish settlements in the West Bank.

Abbas’ new law states that anyone who deals in goods produced in the settlements will be imprisoned for 2-5 years and fined up to 15,000 US dollars. Those who import settlement products into the Palestinian territories are threatened with three to six years, fines of up to 3,000 dollars and confiscation of licenses and vehicles.

The boycott coincides with Palestinians commemorating the 62nd year of the Nakba, or catastrophe, when Palestinians fled or were expelled from their homes by the Israelis during the establishment of the Jewish state in 1948.

PA municipal governors will go door-to-door to raise public awareness. Three thousand volunteers will also be handing out pamphlets to residents, shop owners and businessmen in over 400,000 Palestinian households.

The pamphlets will list over 500 goods produced by Israeli companies in the West Bank and the occupied Syrian Golan Heights.

They will also outline the harm done to the Palestinian economy, the environment and the health sector.

Furthermore, Palestinians will be asked to sign the Karama Pledge, vowing not to purchase settlement goods.

Fayyad has been working towards establishing an independent Palestinian state by building state institutions and lobbying for international support. He has attended burnings of settler goods to draw attention to the issue.

PA police have also carried out numerous interceptions of trucks carrying settler goods, arrested the drivers and then subsequently destroyed the goods. So far goods worth more than one million dollars have been confiscated and destroyed.

An outraged YC has called on the Israeli Prime Minister Benjamin Netanyahu not to engage in proximity talks with the Palestinians, which are due to start in the near future, following U.S. Mideast envoy George Mitchell’s recent arrival in the region.

The YC further demands that the Israeli government compensate the settlers for the financial losses they have incurred by withholding funds belonging to the PA which Israel transfers to the Ramallah government.

The ‘Washington Post’ reported on Sunday that at least 17 businesses in the Israeli settlement of Ma’aleh Adumim had closed down since the beginning of the PA boycott a few months earlier.

Avi Elkayam, a spokesman for 300 factory owners, stated that the Mishor Adumim industrial zone was facing “an insufferable situation”.

Elkayam added that a stone-cutting factory had closed down in May due to Palestinian inspectors routinely intercepting supply trucks.

Much of the West Bank’s stone quarries are stripped of rock and rubble by Israeli companies which are then transported to Israel where they are sold due to a shortage of building materials there. The Palestinians are not compensated for this.

Israel’s settlements are illegal under international law and various U.N. resolutions. The settlers not only expropriate Palestinian land but also other natural resources from the West Bank, including water.

Israeli settlements also dump their untreated sewage into springs and rivers while they pay no taxes to the PA for the various businesses and factories which they operate from the West Bank.

The Israeli government has slammed the boycott and even called it a breach of the Oslo Accords regarding economic trade between Israel and the occupied Palestinian territories.

“The boycott is the bare minimum that the PA can do to counter the settlements. It is a baby step in the right direction of a very long journey. I’m not sure how effective it will be but even a little action is better than no action,” Awad told IPS.

Meanwhile, some foreign diplomats have expressed concern that another PA law banning Palestinian labourers who work on the settlements, due to high unemployment in the West Bank, could backfire with Palestinians being the main victims.

It remains to be seen how easy it will be for the PA to enforce this and whether any financial compensation will be given to the thousands that will join the unemployment queue.

“We are definitely committed to a path of non-violent resistance and defiance in the face of the settlement enterprise, and we are defiantly expressing our right to boycott those products and I believe it is working,” Fayyad told the Washington Post. “We will continue to do more.”

Meanwhile, the boycott, disinvestment and sanctions campaign against Israel continues to grow incrementally.

British singer and musician Elvis Costello has announced a pullout from several concerts he was to give in Israel in June citing “…the intimidation, humiliation or much worse on Palestinian civilians in the name of national security.”