RIO DE JANEIRO, Jun 16 2010 (IPS) - Long known as “the football nation,” Brazil today is seeking a new title: recognition as a global economic and political power — though without denying the sport that made it famous. 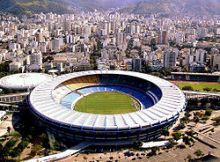 The museum of Rio de Janeiro’s Maracaná stadium artistically synthesises this history in one of its exhibitions. “Patria das chuteiras” (Homeland of football boots) includes a map of this South American giant, outlined by the shapes of hundreds of golden football shoes.

More than a century after the first match played on Brazilian soil between the employees of English companies, Apr. 15, 1895, and from those times in which football was a game of the elite and excluded people of African descent, the “verde amarela” (green yellow) shirt has proved capable of transcending the divisions outside the stadiums.

In the words of Sports Minister Orlando Silva, Brazil “today is known as democratic, a producer of clean energy, with a diversified economy and as a major tourist destination” — but the nation’s international visibility is due to football.

“Fifty years ago, this country was little known in the world, and those big names of Brazilian football and their great conquests were essential” for our introduction abroad, Silva told IPS.

Some see the minister’s explanation as campaign demagoguery for the Oct. 3 elections to coincide with the FIFA Football World Cup under way in South Africa (Jun. 11-Jul. 11). Others see as an act of justice, referring to a government-proposed legislative bill to economically compensate those responsible for past football victories.

The initiative, currently being debated in Congress, would provide a pension for the players of the World Cup championship teams of 1958, 1962 and 1970, when football — though a professional sport at the time in Brazil — did not pay anywhere near what today’s players earn.

“What those men did for our country is impossible to repay,” said Silva.

“It is more than a recognition for those who earned recognition for Brazil,” said Jair Ventura Filho, known as Jairzinho, one of the stars of the champion team of the 1970 FIFA (International Federation of Association Football) World Cup played in Mexico.

“Brazil was considered a nothing, and thanks to football it is now seen as one of the greatest powers in all areas,” Jairzinho, also known as “Hurricane,” told IPS.

The government’s initiative is based on the analysis that football is “one of the main components of national identity,” and a “way of life” for Brazilians, according to the minister, who referred to this popular sport as an element of “social integration.”

“There is no place in our country — whether in the country or in the city or in the suburbs — where there aren’t children playing football, having fun and feeling they are part of something” because of the sport, he said.

Political analyst Fernando Lattman-Weltman agreed that those factors are important for Brazilians because “they were able to create an identity and establish a ‘brand’.”

“Football is a part of our culture’s heritage, it characterises us as a people and is admired by the whole world,” said Lattman-Weltman, professor at the Getulio Vargas Foundation’s Centre for Research and Documentation of Brazilian Contemporary History.

To illustrate this idea, the analyst mentioned a unique perspective in this “homeland of football boots.”

When it is a matter of a football championship within Brazil, the important thing is to win — no matter how. In contrast, when it is a global tournament, it is not enough that the Brazilian team wins, but rather that it play “our ‘beautiful game’,” Brazil’s famous “art of football,” he said.

Lattman-Weltman takes the analysis further, and gives another reason for the dominance of this imported pastime that became deeply rooted in Brazil over the years.

Football has clear rules that everyone understands and it has a notion of merit. The best team wins, he said. “In football, everyone knows when it is a clean win and when it isn’t.”

Those “meritocratic” values of football, according to Lattman-Weltman, on the playing field turn a certain Brazilian demand for justice and respect into reality.

It is a model that is easy for the Brazilian people to identify with, he said. Brazil is an ethnic mix of European and African descendents and indigenous peoples that also has “democratic merit.”

“To play football, it isn’t necessary to be tall or short or black or white or mulatto. Anyone can play,” he said.

On the other hand, it is also a team sport that maintains a place for the individual. “A player who loses or makes a goal or defends against a penalty kick is as important as team play,” said Lattman-Weltman.

“Football is important for the self-esteem of Brazilians because at least in this we are the best,” he summarised.

These descriptions of country and culture haven’t escaped the notice of politicians.

As Lattman-Weltman points out, Brazilian President Luiz Inácio Lula da Silva, known for his strong ability to communicate with the people, often uses football metaphors — even for the most complex economic issues.

“It is a popular language that everyone understands. And politics has a lot in common with football,” he said.

“Each player has to be a patriot to play for our country,” said the head coach of the Brazilian national team, Carlos Caetano Bledorn Verri, known as Dunga. He was defining the spirit of the World Cup, in which Brazil won its first match 2-1 against North Korea, on Tuesday in South Africa.

And in explaining why he did not include internationally known stars like Ronaldinho and Adriano on this year’s national team, the coach simply stated: “in every war there are casualties.”