MONROVIA, Oct 24 2010 (IPS) - It is break time at the Victory Chapel School in Congo Town. Children dressed in their royal blue uniforms with bright yellow and white trim fight to get under the shade of the only mango tree in the yard. It is the start of the dry season and the scorching sun will soon be almost unbearable to stand in. 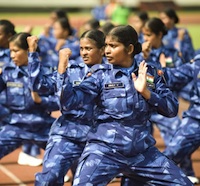 This small school, on the outskirts of Liberia’s capital, Monrovia, is much like any other in the city until you see what stands beside it. More than a hundred female peacekeepers patrol the grounds of a big white fenced compound, the first all-female unit of UN police in history.

The women are an arresting sight: dressed in their blue army combat uniform, black boots, the signature United Nations blue cap and each carrying an AK-47. But the school children are so used to their presence they barely give them a second glance.

“It surprised me at the beginning because it is my first time to see different people come around me,” says Wokie Sarchie, a fifth grade student at the school.

The Indian peacekeepers arrived in Liberia in 2007. Their main role is guarding the president’s office on Capitol Hill on the other side of the city. When they are not protecting the president, they are often here helping the teachers at the school.

According to Jickson Sargeor, the principal of Victory Chapel School, the Indian peacekeeping contingent provides the children with medication, lessons on using computers and Indian dance and self defense. In addition, the principal believes the Indian women have brought a much more important message to the children.

“It has made the girls to believe that they are not just people to sit at home, they are people to get out there,” he says.

Sandra Weah, an eighth grade student, toyed with the idea of following her peacekeeper role models into the security field, but her new love for dancing and music made her change her mind. “For me I wanted to be an army woman but then when I saw my friends doing music, I decided to leave the army to go and be a musician.”

The female contingent of peacekeepers came to Liberia in response to the UN Security Council Resolution 1325 on women, peace and security. Liberia is the first African country to complete a National Action Plan to implement the resolution.

Fourteen years of civil war in the West African state saw some of the worst atrocities women and children have ever experienced on the African continent. More than 60 percent of women say they were raped, according to the U.N. Mission in Liberia, UNMIL.

When Ellen Johnson Sirleaf, Africa’s first female president, took office in Liberia in 2005, increasing the number of women in the country’s security services was one of her top priorities.

The numbers speak for themselves. Five years ago, one in 20 police personnel was a woman. Now, nearly one in five is female. According to UNMIL, applications from women to join the police force tripled the year after the female Indian peacekeepers arrived.

There is still some way to go with the armed forces, where women make up less than one in ten. But Carole Doucet, the U.N. Gender Advisor in Liberia believes this is still an achievement.

“It is still an improvement from the one in one hundred figures from 2005,” she says.

There are still many challenges facing the full implementation of Resolution 1325 in Liberia, especially in the rural areas. Poverty, access to education and the lack of economic power put women in a difficult position. A recent article in one of the capital’s newspapers found children as young as ten were having sex with men for as little as three U.S. cents.

But in Congo Town, at the Victory Chapel School, there is a feeling that the next generation of Liberians are growing up with the view that women can do anything and everything men can do.

Schoolteacher Gloria Adjer, a young women herself, believes the peacekeepers are giving women the strength and inspiration to stand shoulder to shoulder with the men.

“The Indian people have come and taught us that we women too are necessary to do the work they are doing,” she says. “We believed that not only men do these [kinds of] work but women too are capable of doing it.”

“It makes the boys to feel that women are also part of society. It also makes boys think women can do what men do,” says Principal Sargeor.

*Sonnie Morrie is a Fellow of New Narratives, a project supporting female journalists in Liberia