PAKISTAN: Divided Between the Mullah and the Model

KARACHI, Feb 9 2011 (IPS) - A spat between a Pakistani actress and an Islamic leader has emerged as a vivid revelation of a deep split across the nation between different sets of values. 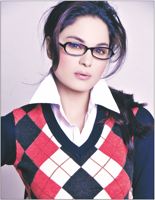 Veena Malik, 27, a model turned actor, was recently ‘evicted’ from season four of Big Boss, an Indian reality television show. Big Boss, a three-month show, follows the Big Brother format in which a group of about 14 celebrities are invited to live together in a large house, cut off from the outside world and watched continuously by cameras. Every week or so, the housemates are invited to evict one among them. At the end of the game, the last remaining housemate is declared the winner of that series and receives the prize.

Malik says “it is a hell of a lot of money,” without disclosing the amount. She hinted, though, that “TV is bigger than Bollywood.”

Since her return to Pakistan, Veena Malik has received flak both from the media and the clergy for working in a show in archrival India and, for her supposed indiscretions during the show including giving massages, and cuddling and hugging her male housemates. She was also reprimanded for exposing herself in the way she dressed.

“I was who I am, I never pretended to be any different,” says Malik, undeterred. “I am an actress and an entertainer. I was not representing any Islamic group.” Those who found her offensive had the option, she says, to switch off the television channel.

Malik says much of what she did during the show was “scripted”, and she followed directions. But she says she went further and tried to show another side of Pakistan, of women who are “educated, liberal, independent.” The outside world, she says, has seen enough of women being thrashed in public.

“Culture is not just about wearing a salwar-kameez and donning a dupatta; I agree I wore western dresses, even shorts, but then I do so in Pakistan as well. But more than clothes, I wanted to show them there was another side of Pakistan.” She added: “I know my values as a Pakistani and a Muslim and never overstepped these once.

“I never shied from doing housework, I cooked, I prayed, I never resorted to abuse or backbiting and bitching when others did.”

But the reaction to her shows that more than ever, the space for liberal- minded people in Pakistan appears to be shrinking, with increased Islamic fundamentalism on the rise.

Last month the liberal and outspoken governor of Punjab, Salman Taseer, was assassinated for supporting a Christian woman sentenced to death under the blasphemy law. Lawmaker and former information minister Sherry Rehman has been threatened she would “be silenced” for seeking amendments to the law.

Malik has been advised to step up her security in the face of increasing Islamic fundamentalism.

On the television show ‘Frontline’ Mufti Abdul Kawi called Veena Malik “immoral”, and berated her for shaming Islam and Pakistan for the way she conducted herself on the Big Boss show.

The programme has drawn mixed reaction. There was widespread support from liberals and rights activists on social networking websites, with messages praising Malik for her witty repartees. But she drew much hostility.

“I was a soft target because I am a woman. Had it been a Pakistani man in my place, he’d have returned a hero.”

What hurts most, she says, is the “double standards with which we view and weigh a man and a woman” in Pakistan. “What is ok for a man is not ok for a woman, why?”

“It’s not a matter of being a man or a woman,” says Mufti Muhammad Naeem, head of Jamia Binoria, an Islamic university in the southern port city Karachi. “Islam does not allow men and women to interact like this, neither does our culture.” But he said there was no need for a cleric to go on air and slate a woman for her “misconduct”.

“This public display of chastisement by the cleric was not in good taste either,” he said.

Malik says she agreed to come on the Pakistani talk show “to clear all the misunderstandings that were being brewed by the media.” Instead she had to brave insults hurled at her by the cleric and the talk show host himself. “I was not told I’d have to be answerable to a maulana.”

“I believe Veena spoke both with reason and clarity, and had the courage to do so, for which I commend her, indeed, salute her,” says Feryal Gohar, a rights activist and filmmaker.

Gohar says a misogynist Pakistani society is becoming increasingly “hostile to freedom of choice, in particular, when exercised by women. If women are not axed or stabbed to death for expressing that freedom or right, then they are buried alive, burnt with acid, raped, or electrocuted.”

When a woman chooses to live her life as she sees fit, she is “reviled by a society which sees itself endangered,” says Gohar. This, she says, is founded on notions of patriarchy which expects a woman’s complete submission.

Farahnaz Zahidi, a female Islamic scholar and feature writer agrees that every individual has a right to “lead his or her life as they wish.” But celebrities, she says, “in any capacity” have an “added responsibility when they are representing their nation, whether they are politicians, actors, singers, religious leaders, anybody.”

Zahidi acknowledges that in a largely patriarchal society like Pakistan, Malik has to “bear with excessive attacks” being a woman.

Many agree that Malik was right in pointing out to the cleric that there were many more serious issues in Pakistan that needed the attention of his ilk. “These fanatics are worrying about the clothes she is wearing while the country is being drowned in bloodshed,” says Taimur Rehman, a young political activist and leader of the music group Laal.