LIMA, Mar 21 2011 (IPS) - Congressional candidates nominated by the party of presidential hopeful Keiko Fujimori to stand in the Apr. 10 elections in Peru failed to inform the electoral authorities that they are under investigation for drug trafficking and money laundering. 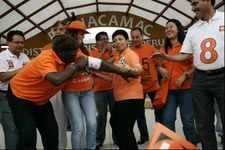 The media in Peru have so far reported three cases of candidates allegedly linked to illegal drug trafficking.

Thirteen parties are presenting candidates for Congress. But the three candidates with alleged drug ties all belong to Fuerza 2011, the political party backing presidential candidate Keiko Fujimori, whose father, former president Alberto Fujimori (1990-2000), is serving lengthy sentences for corruption and crimes against humanity in a prison close to Lima.

U.S. State Department documents leaked by the whistleblower website WikiLeaks have pointed to other connections between members of Fuerza 2011 and suspected drug traffickers.

Although the polls put Keiko Fujimori in second place in the presidential race, her share of voter support has been declining since January, making it less likely that she will be in the projected run-off ballot Jun. 5 against the favourite, former president Alejandro Toledo (2001-2006).

DEVIDA, the national anti-drugs commission, promoted an Ethical Commitment against Drug Trafficking to be adopted by political parties taking part in the elections. But Fujimori and her party did not sign it.

In the document, political organisations putting up presidential and congressional candidates commit themselves to “establish rigorous candidate selection procedures.”

The procedures should, in particular, promote “accurate and transparent information on the backgrounds of aspirants to elected office, in order to prevent drug trafficking activities within the parties,” it says.

The case of José “Pepe” Vásquez, a well-known singer of Afro-Peruvian folk music, was the first to come to light, only a few days after Fujimori presented her list of congressional candidates.

“The candidates went through a rigorous selection process,” she said at the time.

However, the television programme Día D revealed that the anti-narcotics police were investigating Vásquez for alleged ties to Peruvian drug lord Augusto Arriaga.

Arriaga is wanted by the police for allegedly heading a cocaine smuggling gang involving Colombian and Mexican citizens.

Fujimori said it was a conspiracy against her, and hired a lawyer for Vásquez from the firm that provided her father’s defence counsel.

But further evidence about the connection between Vásquez and Arriaga eventually forced Fujimori to remove the singer from her list of congressional candidates.

Then La República, a Lima newspaper, exposed two other Fujimorista congressional aspirants suspected of having contacts with drug trafficking cartels.

Karina Beteta and Juan Almonacid are both from the central province of Huanuco where coca leaf and cocaine is produced in the Upper Huallaga valley.

Peru has taken over from Colombia as the world’s leading producer of coca leaf, the plant used to make cocaine, according to the United Nations Office on Drugs and Crime (UNODC).

Beteta was elected to Congress in 2006 as a candidate for the alliance between the Partido Nacionalista (PNP) and Unión por el Perú (UPP), and is now on the Fuerza 2011 candidate list. She is under investigation by the Lima prosecution service for allegedly laundering drug trafficking assets.

Prosecutors suspect that Beteta, a lawyer, helped cover up the illicit origin of assets owned by her brother-in-law, Luis Egoavil, who has a criminal record for drug trafficking.

Beteta claims she did not know Egoavil was involved in drug smuggling, but the prosecution is unconvinced.

Almonacid, the owner of the Turismo Armonía transport company, is being investigated by the prosecution services in Bolognesi, in the northern province of Áncash, for alleged drug trafficking and money laundering.

A series of drug seizures from the buses’ baggage compartments and passengers’ belongings sparked the Turismo Armonía investigation.

Keiko Fujimori has not made any public statement about the two new cases, nor have the electoral authorities made any official pronouncement about the candidates under investigation for drug links on the Fuerza 2011 list.

“As things stand, it would seem that drug trafficking is not an issue of real concern and interest to some authorities,” the head of the National Council for Public Ethics (Proética), Cecilia Blondet, told IPS.

“It would appear that transparency and oversight are a nuisance, and that actually, corruption is necessary to continue operating in complete impunity,” she added.

“Drug traffickers need protection for their smuggling and money laundering, and what could be better than linking up with politicians?” Blondet said.

“The way they meet this goal nowadays is by financing corrupt candidates, who, once they are elected to Congress, will protect them and guarantee they can continue to operate with impunity. This also makes it harder to identify the traffickers,” she said.

Proética launched a campaign advocating that citizens should study the résumés submitted by presidential and congressional candidates to the National Elections Board (JNE), which makes them public, and report false information and omissions.

The CVs submitted by Beteta and Almonacid did not mention that they are under investigation for drug trafficking and money laundering.

Another Lima newspaper, El Comercio, published a diplomatic cable from the U.S. embassy in Peru dated Nov. 28, 2006, alleging that Rofilio Neyra, a businessman, had links to the drug trade.

The cable, one of the U.S. State Department documents published by WikiLeaks, expresses concern about the influence of “narco-politics” in Peru.

Neyra is a congressional candidate for Fuerza 2011, and when the cable was published Keiko Fujimori defended him and kept his name on the list.

Inés Arias, coordinator of the non-governmental Working Group Against Corruption (GTCC), said, “There should be a debate about the need to restrict participation in elections by those investigated and prosecuted for drug trafficking and money laundering.

“But this would require a full discussion about whether the right of every person to be presumed innocent until proven guilty should continue to prevail,” she acknowledged.

Arias said it was not enough to combat the penetration of politics and the branches of government by drug trafficking, by means of more laws against the various crimes involved.

“Care must also be taken to prevent the financing of political parties by groups linked to the drug trade,” she stressed.

Fujimori has herself been linked to persons investigated for drug trafficking.

She admitted on a television programme that she received campaign contributions in 2006 from the family of fisheries businessman Eudocio “Olluquito” Martínez, who was investigated for drug trafficking charges, and she has not denied they are financing her present campaign.

Virgilio Hurtado, spokesman for the National Elections Board (JNE), told IPS that only candidates who have failed to disclose previous convictions in their résumés can be banned from running for office.

Those prosecuted for serious charges, like drug trafficking and laundering assets arising from criminal actions, are not compelled to disclose that information, he said.