Cote d’Ivoire on the Edge of Chaos

ABIDJAN, Apr 5 2011 (IPS) - Forces of law and order have abandoned their posts in Abidjan, creating a vacuum which has rapidly filled with violence, looting and fear. 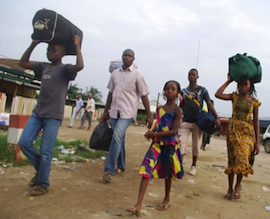 Residents of Côte d’Ivoire’s commercial capital are shut in their homes, doors closed against scenes of pillage and assault of civilians, while reports of intercommunal clashes in the west of the country complete the picture of a country descending into chaos.

The town of Duékoué has gained international notoriety with reports of massacres taking place just before it was taken over by forces loyal to the internationally recognised victor of November 2010 elections, Alassane Ouattara on Mar. 29. International media reported that the Catholic charity Caritas had counted up to a thousand bodies in and around the town, with bullet and machete injuries.

Valerie Amos, the United Nations Humanitarian Affairs and Emergency Relief Coordinator, who is visiting Duékoué, told the press she could not confirm the higher numbers, but said U.N. investigators had found one mass grave containing nearly 200 bodies as well as casualties in other parts of the town.

A communiqué from Médecins sans Frontières (MSF), released on Apr. 2, said that seriously injured people coming to hospitals in Bangolo, in the west of the country.

MSF said that 195 people had received emergency treatment by its doctors in Bangolo, Man and Danané; 240 others had been cared for by its emergency teams at the Catholic mission in Duékoué, where 15,000 displaced persons have taken shelter.

The countryside is charged with tension. “Since arriving here five days ago, pro-Ouattara forces, indigenes and people from outside are all guilty of destruction of property and physical assault,” Stéphane Abouo, a teacher in N’douci, 85 kilometres north of Abidjan, told IPS by phone.

The village chief, says Abouo, was denounced by non-indigenes and killed for his presumed support of Gbagbo.

Inside Abidjan, the Port-Bouët II section of the Yopougon quartier, was completely destroyed on Saturday (Apr. 2) by elements of the Defence and Security Forces loyal to the incumbent president, Laurent Gbagbo, who has refused to recognise his rivals’ victory.

The neighbourhood was known to strongly support Ouatarra, and fell under suspicion of harbouring pro-Ouattara fighters. “During the first incursion here by pro-Gbagbo forces at the end of March, residents saved themselves by abandoning their homes. But this time (on the morning of Apr. 2), there was a real massacre of rebel forces and civilians,” Bertin Konan, an IT specialist living in the adjacent area of Siporex, told IPS.

Konan told IPS that Port-Bouët is deserted now, with only a handful of its 3,000 residents left with most others having fled the city.

Trapped indoors for the past five days, many people in the rest of the city are beginning to run out of food and other necessities. Making it worse, the water supply has been cut off in many parts of Abidjan since Saturday, including the western neighbourhood of Cocody-Anono, Treichville in the south) and the central quarter of Adjamé.

On Monday in the commune of Cocody, it was men with carts stacked high with jerry-cans and barrels who were busiest, searching for water. “Twenty litres of water for 500 CFA francs (around 1.20 dollars): it’s take it or leave it and we had no choice,” said Fabrice Kokora, a municipal official in Cocody.

IPS found one supermarket that dared to open its doors in the Cocody-II Plateaux area besieged by long lines of waiting customers. People had braved the sound of heavy exchanges of gunfire between pro-Gbagbo and pro-Ouattara fighters to find something to eat. Some carried bags of rice away on their backs, others had bundles on their heads. No public transport was available.

With markets closed, vendors now occupy certain sidewalks and crossroads to sell whatever they have in stock. A bowl of attiéké, the cassava staple across much of the south, is selling for 400 or even 500 CFA (1.20 dollars) against 100 francs in normal times. Other products have seen their prices triple or quadruple.

“The country has certainly reached the point of no return,” says Marcelline Guéï, a restaurant owner in the chic neighbourhood of Cocody-II Plateaux. After locking up her restaurant, she – like most of those who live near the combat zones – is trying to leave the city.

“One doesn’t know where to go really. It’s unsafe everywhere,” says Rolande Touré, an elderly tailor from Abobo – the northern neighbourhood which has suffered violent confrontation longer than anywhere else in the city.

Touré, who has found temporary refuge in Cocody, condemned the settling of scores and other inter-ethnic and inter-communal clashes taking place across the country.