COLOMBO, Jun 16 2011 (IPS) - With the monsoon season upon it, Sri Lanka’s war against the deadly dengue- carrying mosquito faces its toughest test yet, but early signs show that the mosquitoes are not quite ready to give up. 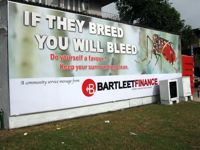 A poster in Colombo makes the dangers from dengue clear. Credit: Amantha Perera/IPS.

Despite concerted nationwide efforts for the past two-and-a-half years, dengue infection rates went up in April and May. In May alone, 1,955 cases were reported, a fraction more than the 1,950 reported during the same period in 2010. It was the first time this year that infections rose past levels recorded last year.

This week, Health Minister Maithripala Sirisena appealed to the nation to consider dengue prevention a national priority. The government has declared the week of Jun. 20-26 National Mosquito Control Week, as the health authorities amp up prevention efforts.

A close examination of the spread of the virus shows where it finds its comfort zone: the jam-packed urban cities along the western coast. Of the 7,333 cases reported up to the first week of June, over a third or 2,502 came from the Colombo District. The Western Province accounts for 3,773 cases.

Experts contend that dengue is now an urban disease. The World Health Organisation has also categorised Sri Lanka as a country prone to cyclic dengue epidemics in urban areas.

But the anti-dengue campaign is shaping up to be a war of attrition, and health authorities have adopted some drastic methods to fight it. Owners of residences or other premises ignoring breeding grounds face fines of up to 100 dollars.

In mid-2010, plainclothes police officers were assigned to stake out and arrest those dumping garbage at unauthorised locations. The armed forces and police helped clean up public areas suspected of being breeding grounds. Health authorities also released a bacterium to kill the larva of the dengue-carrying Aedes Aegytpi mosquito in its breeding grounds.

On another front, the Sri Lankan government launched a massive public awareness campaign with schools as the main vehicles to disseminate knowledge on stopping dengue from spreading. Preventive methods were worked into school curricula, children took part in public awareness campaigns, and the Health Ministry and its Epidemiology Unit still conducts monthly dengue awareness weeks, which began in mid-2010.

But it is the arrival of the rains that will determine whether this campaign will succeed, officials at the Epidemiology Unit said. “The rains will be the best test,” said Pabha Palihawadana, head of the unit.

When the year began, human intervention appeared to have gained the upper hand. Infection rates showed the first signs of slowing down since 2009. In January, only 910 cases were reported island- wide, Health Ministry data showed. In November and December 2010, only 645 and 779 infections were reported. It looked like the mosquitoes were finally on the retreat.

But in urban environments, the dengue-carrying mosquitoes have more places in which to hide and breed, among them refrigerator water outlets, air-conditioning systems, vases, plants and tree crevices, garbage dumps with open containers, tires, house gutters, and even water resting on dead leaves.

The mosquitoes “breed in clean water pools both inside households and outside. In an urban area, there are many more places, number of containers where this particular mosquito can breed, compared to less populated rural areas of the country,” Kumari Navaratne, a Public Health Expert with the World Bank, told IPS.

When the rains arrive, mosquito breeding increases as does the spread of infections. In a research paper compiled in May 2009, the Epidemiology Unit warned that infections spiked in the middle of the year, from May to July when the seasonal south-west monsoon hits the western region of the island. That prediction has proved deadly accurate.

Experts identify as one of the biggest causes of dengue in urban areas the negligence that allows breeding areas to remain unattended. “Urban life styles have contributed a lot to the virus spreading,” Palihawadana said.

The World Bank’s Navaratne also pointed out that another key factor is high urban population density. In Colombo, population density is about 3,500 persons per sq km, which falls to between 60 and 100 persons in some rural areas. “Where there are more people the dengue epidemic spreads much faster,” the health expert said.

Last year when the government swung into full action mode in prevention and awareness efforts, public participation was at an all time high. But as infections dropped, so has public enthusiasm.

The Health Ministry said in the first week of June that Colombo city limits were the worst affected by the latest spread, but public participation was low. This week the Ministry launched a fresh prevention programme, to include awareness weeks and more visits from health inspectors.

Experts like Palihawadana and Navaratne agree that it is almost impossible to wipe out the disease. Unless there is active public participation the likes of which Sri Lanka had seen when dengue cases reached near-epidemic proportions, controlling the spread will be very difficult.

One area that has been a rare success in the battle is the drop in the number of fatalities. Navaratne said that it was primarily due to an effective early detection system and treatment, especially at government-run hospitals.

According to doctors at the Epidemiology Unit, similar success on infection rates can be achieved if ordinary citizens take up the fight in earnest. Till such a change is clear, they are all for the continuation of stringent measures and prosecutions. The motto of the fight will remain: “If you can’t get the mosquito, get the breeder.”