ABIDJAN, Jul 15 2011 (IPS) - Government and civil society in Côte d’Ivoire are divided over the scope of the investigations to be undertaken by the International Criminal Court into atrocities and serious violations of human rights committed during the post- electoral crisis. 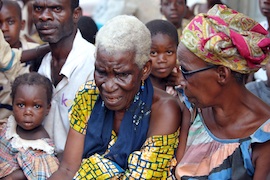 The Ivorian government wants the ICC to look only at events that took place in the past six months. Civil society wants the international court to review rights violations committed in Côte d’Ivoire over the past decade, in order to achieve true reconciliation in the country.

“The present crisis didn’t begin with the 2010 presidential election; it has its roots in September 2002, the date of the failed coup attempt which evolved into an armed rebellion,” René Legré Hokou told IPS.

According to Hokou, who is the interim president of the Abidjan-based Ivorian League for Human Rights, it is essential that those responsible for serious crimes committed since 2002 to be identified, put on trial, and punished.

“If we limit the scope of the inquiry,” he said, “we abandon all those who died during this period.”

He believes that after long years of crisis, the country cannot move towards true and lasting reconciliation if it adopts a limited and selected vision of the suffering the population has lived through.

Patrick N’gouan, president of the Convention de la société civile ivoirienne, a grouping of non- governmental organisations, agrees that the ICC must contribute to reconciliation in Côte d’Ivoire. “It must avoid justice that is oriented towards [just] one side. If not, it’s a situation that will create the seeds of another crisis like that of 2002.”

“I don’t thing that today we are going to have trials for incidents dating back several years. We need to concentrate on recent events and those which are still current,” said Bruno Koné, government spokesperson.

“If one wants to go back into the past to assign responsibility, then one has to go back to the very first events. And that is a difficult commitment to make,” he added.

However Koné clarified that people who had suffered violent crimes or loss of property could make use of the country’s domestic justice system. “As long as the statute of limitations has not lapsed, the national justice system can address them. So previous incidents will be properly looked into.”

Abidjan lawyer Abraham Gadji finds this inconsistent. “This means that international law will be authorised to pursue people for crimes commited in the course of the recent crisis. And for the incidents occurring nearly a decade ago, one will have recourse to the national courts. This has the appearance of a restrictive and unfair justice.”

He believes that ensuring justice for all crimes committed between 2002 to 2010 requires choosing either the ICC or Côte d’Ivoire’s own courts to try them all. “These are crimes against humanity and those responsible must be identified. Some elements are already in place for these cases,”he told IPS.

Gadji mentioned, among others, massacres in the villages of Guitrozon and Petit Duékoué in 2005; the killing of as many as 150 people during an opposition march in March 2004; the unresolved murders of the former president Robert Guéï and Interior Minister Boga Doudou – both killed during the failed coup in 2002 – as well as massacres – and the 57 bodies found in a mass grave in Yopougon (north-east of Abidjan) in 2000.

“We have find the right time and take up our responsbilities. The ICC doesn’t control us and we can create our own tribunal and impose our wishes on it,” said Louis André Dacoury-Tabley, former minister and a member of the former rebellion, on the United Nations radio station on Jul. 10.

But at least one group representing victims of violence linked to the failed coup in 2002 rejects the idea of a national tribunal.

“In recommending that the ICC investigation covers only the period from November 2010 to now, there is an intent to deliver only a partial justice,” said Kalilou Kamara, a member of the Collective of Victims of September 19, 2002, based in Abidjan.