UNITED NATIONS, Jul 26 2011 (IPS) - As Haiti struggles to recover from the deadly January 2010 earthquake that killed over 200,000 people and forced nearly 1.5 million into camps, international funding is failing to keep pace with the generous pledges made last year, and in- fighting in Haiti’s new government is hindering the disbursement of aid. 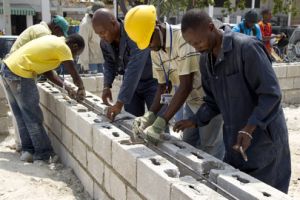 Construction workers fasten the base of the pre-fabricated Haitian Parliament facility, being built with funds from the U.N. peacekeeping mission. Credit: UN Photo

Most of the rubble is still clogging the capital, Port-au-Prince, preventing people from moving back to their homes, resuming their lives and allowing the recovery process to truly take hold in Haiti’s capital city.

The estimated cost of rebuilding Haiti is a hefty 11.5 billion dollars “and the organisations working in the country need continuous support,” says UNDP.

In March 2010, U.N. member states pledged more than nine billion dollars to rebuild the country, including 5.3 billion for 2010-2011. Just 352 million dollars have been delivered to the Haiti Reconstruction Fund to date, with 237 million of that sum disbursed for 14 reconstruction projects, according to the fund’s first annual report released on Jul. 22.

At least 600,000 people still live in tent camps, and more than 5,500 have died from the cholera epidemic that broke out last October.

Reconstruction efforts in Haiti are being led not only by donors from rich and poor nations but also by international organisations, including the United Nations, the World Bank, the European Union, the Inter-American Development Bank and IBSA, the coalition of three emerging nations in the developing world: India, Brazil and South Africa.

Ambassador Hardeep Singh Puri of India, an active member of IBSA, told IPS his country had made a “modest contribution” of five million dollars in the immediate aftermath of the earthquake followed by 500,000 dollars to the U.N.’s Central Emergency Response Fund (CERF).

Additionally, IBSA is planning to expand its joint Trust Fund waste management project to provide other basic amenities, such as shelter, drinking water and sanitation.

Currently, the three countries are spending over two million dollars in this effort, and also in the reconstruction of a community health centre in Haiti.

Meanwhile, the Haiti Reconstruction Fund (HRF) – created in June 2010 by the government of Haiti, the Inter-American Development Bank, the United Nations, the World Bank and donor nations – has disbursed about 71 percent of the 335 million dollars received by donors.

Asked about the progress made so far, Josef Leitmann, manager of the HRF, told IPS, “We have to be realistic and recognise that reconstruction under these exceptionally hard circumstances takes time.”

He cited the difficulty of rebuilding Aceh, Indonesia, for example, the closest point of land to the epicentre of the massive 2004 Indian Ocean earthquake and subsequent tsunami, and noted that recovery was slow even in the United States following Hurricane Katrina in 2005. And both those nations had well-functioning central governments.

The human, economic and institutional toll makes reconstruction a long-term endeavour, he stressed.

By the same token, he said, “We have made important progress in key areas: housing reconstruction, debris removal and education.”

“This progress in building back better is, and has been possible, when the government, the international community, the private sector and non-governmental organisations (NGOs) work together putting people first,” he added.

But contributions have also come from developing nations and from non- Western donors, including Colombia, Nigeria, Oman, Thailand, Cyprus, Estonia and Latvia.

When the United Nations Security Council recently urged the international community to increase its assistance towards the long- term recovery and reconstruction of Haiti, the outpouring of support was reflected in the commitments both from rich and poor nations.

Perhaps one of the biggest collective pledges – a reflection of what the United Nations describes as “South-South cooperation” – came from the 12-member Union of South American Nations (UNASUR) which is providing some 100 million dollars in financial support to Haiti.

And at least 65 percent of the funds has already been disbursed and coordinated by a newly-created UNASUR office in Port-au-Prince.

Cuba, in conjunction with the Bolivarian Alliance for the Peoples of Our America, is rebuilding Haiti’s national health services, which is treating over two million patients in 23 community hospitals, 30 rehabilitation wards and 13 health centres throughout the country.

Peru is providing some 10 million dollars towards the UNASUR special fund for Haiti.

The Mexican government, which airlifted some 15,000 tonnes of humanitarian aid immediately after the earthquake, has set up a ‘Mexico Alliance for Haiti,’ described as a joint public-private sector initiative for institution building in the fields of health and education.

The funds include about three million collars from private foundations in Mexico.

The West African nation of Gabon has provided a million dollars to Haiti primarily towards its reconstruction efforts.

Meanwhile, after a meeting last May, the U.N. Security Council urged Haiti’s new government, headed by President Michel Martelly, to focus on the critical tasks of rebuilding the country and ensuring stability and rule of law in the Caribbean nation.

However, Martelly has been locked in a stalemate with Parliament over his choices for prime minister, leaving the country without a working government.