UNITED NATIONS, Jul 11 2011 (IPS) - While in New York to celebrate the launch of UN Women’s flagship biennium publication, “Progress of the World’s Women: In Pursuit of Justice”, Botswana’s Unity Dow sat down with IPS to discuss the United Nations’ newest entity, its landmark report, and the road ahead for women. 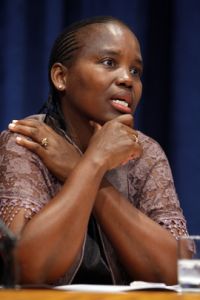 Dow is a lawyer, human rights activist, and formerly Botswana’s first female judge. She has studied both within Africa and abroad, and has authored five books. She is serving her second term as commissioner of the International Commission of Jurists, and is chairperson of their Executive Committee.

In 1992, she made headlines by refusing to sit back when Botswana’s Citizenship Act prohibited her from passing the rights and privileges of citizenship to her children because she had married a foreign man. She fought and won a landmark court case and, in the process, extended the legal clout of all Batswana women.

Q: Your story was featured prominently in the first ever UN Women’s report. What do you think is the significance of your story to women around the world? What message does it hold for those who read it? A: I think it’s important for people who read it to see that I’m not unique or special, at the end of the day. And also, I guess, to realise that the reason why I was able to do it has to do with my family. It has to do with a strong, supportive family – my parents, my siblings – who were always there for every court appearance, who were there when I was crying and bothered, who were there when I was happy about any outcome.

It wasn’t an individual journey, you know? You need family to succeed. You can cut a path for yourself but if you don’t have people supporting around you… They made it lighter for me.

Q: You’ve worked in partnership with UN Women. What do you expect to see from the agency over the next several years, or decades? A: I think first of all, just the creation of this new agency, in itself, I don’t think we can underestimate this really – the push that it does for women, the strength and the power it gives to women. Even before we talk about how much money it has, even before we talk about who’s in leadership – and I think it’s very, very lucky to have the leader that it has.

In terms of what we expect from it, it’s really to create a new energy around issues of women. The kind of energy we got around Beijing [1995 World Conference on Women], which kind of began to die down, it’s really giving some more power to that again. And also it’s forcing governments to have specific programmes on women, because now you have an agency of that level being responsible, and it’s going to ask questions and it’s going to engage with governments – so that’s good.

To have UN Women, just the power of that in itself I think is fantastic. If you remember, within governments, originally we had maybe children and women’s units, and later they become departments, and over time some become ministries. So it’s really that process of saying, “Women are too important to be in little units somewhere without any power.”

Q: Now, the report itself has the central theme of “justice”, and you yourself have dedicated your life to the justice system. Why do you think that justice and the legal system are so important in women’s empowerment? A: Because, I mean, the legal system is about not just creating frameworks, it’s also about providing resolutions to dismiss. So let’s talk about, first of all, the framework. You need laws because once you have laws, attitudes change, and again, that’s very important.

If you have a law that says you cannot discriminate against women, it won’t change over time, but the fact that the law exists over time changes attitudes, because it creates a norm and destroys, maybe, a negative norm that was in place.

Q: You were formerly a High Court judge, but you’ve retired from the bench and started your own law practice. Do you think that’s a more effective way of reaching women, or was it a personal decision? A: I was a judge for 11 and a half years and I learned a lot on that bench. But I also felt that I was not in control of my life, because you sit there waiting for cases to come to you. But I also felt that – when I was appointed I was the first female judge and the argument was, ‘Look, we need women in decision-making powers; you cannot not take this job.’ I understood that, and I think it was good that I did that.

But after a while you realise that you still do need people to bring the right cases to court. You need good judges, well-trained judges, but also you need good lawyers – well-trained lawyers, gender- sensitive lawyers – who can bring the right cases to court. And I didn’t feel that that was happening, so that’s why I quit to do the kind of work I was doing before.

Q: You’re also a novelist – you were just showing me your most recent book, “Saturday is for Funerals”. That’s about AIDS, which is a very serious problem in Botswana. Do you think that it’s a women’s issue, specifically? How do you think that increased women’s empowerment would affect the AIDS situation? A: It’s not just a women’s issue, but it is a gender issue. When parents die, leaving young children, some woman is going to have to show up and take care of them – that’s just the way things are. So, women become caregivers to other people’s children who died in the family. It’s also a gender issue because if women do not have economic power, they’re more likely to engage in risky behaviour, and therefore get HIV.

It’s a gender issue because when people die young, leaving children, there are all kinds of inheritance issues, all kinds of laws that come to play as to who has the right to inherit what. So it is a gender issue. Professional caregivers almost all over the world, including Botswana – nurses, social workers – are women. So you find that in particular those professions are burdened because of HIV/AIDS and it becomes a gender issue.

Education of women gives them more power; they are more able to negotiate a relationship, to get out of relations that are hurtful, or harming them, and not to compromise. So education is very important from that point of view.