LIBYA: Dreaming of a Future After Gaddafi

NALUT, Libya, Aug 24 2011 (IPS) - “We grabbed all these weapons from Gaddafi’s compound just before NATO shelled the whole place,” says rebel fighter Massud Askar in downtown Nalut. The 50-year-old rebel displays an Italian light semi-automatic rifle in his right hand and a hand grenade in the other. 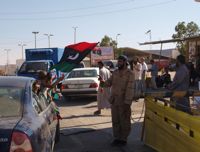 For rebels looking for change, all roads lead to Tripoli. Credit: Karlos Zurutuza/IPS.

“We broke into the compound at around 3 pm. We got all this stuff from Bab Aziziyah’s main entrance,” adds the exultant fighter before heading out for the three-hour trip back to Tripoli, about 150 miles to the north.

Since the first rebel troops entered Libya’s capital a few days ago, this Berber mountain village has worked as a hub for fresh fighters bound for the country’s capital. In Nalut, heavy machine guns atop sand-camouflaged pick-ups are everywhere.

“We’re all heading down to Zawiya and Tripoli for the final battle, and we need all the Kalashnikovs and Fal rifles we can gather. Security is Nafusa is not an issue today as Gaddafi’s last followers are too busy on Tripoli’s outskirts to care about what we’re doing up here,” rebel commander Essam Assad tells IPS.

The breaking news coming from Gaddafi’s strongholds has been the focus of attention. But others already venture to look ahead. Said Hafiz is concerned about his children’s schooling.

“They’re going to start school earlier than normal after the summer vacation but I wonder if that will be enough for the kids to catch up with the lessons,” Hafiz tells IPS. Most local children have attended classes in makeshift tents in the middle of the Tunisian desert for the last five months.

“It’s not just about wasted time. Are the young generations going to stick to the propaganda boosted by the regime’s curriculum?” asks Ibrahim Walid, a local teacher until last February. Walid says he’s ready to help remove “Gaddafi’s cosmology” from the school books.

But a 55-year-old local teacher has a more ambitious dream. “We’ve spent the last four decades under a regime that hated us, the Amazig people. I hope I can catch up with schooling in our own language before I retire.”

The Amazig – also called “Berbers” – form Libya’s largest minority. They are estimated to be five to 10 percent of the Libyan population of six million. Living apart in the mountains – often in self-imposed exclusion – has helped keep alive their ancient language Tamazight.

Everyone wants to seize the moment. Walid Essam, a 30-year-old former lawyer, has been unemployed since the revolution started, like most local shopkeepers, clerks, lorry drivers and others.

“We have only two choices: either we languish in the middle of the Tunisian desert, or we take up a gun and fight the regime,” Essam tells IPS next to his pick-up turned into to a war hot-rod, as he heads out to Tripoli.

The upper hand in the war has dramatically swung to the rebels’ side over the last few days. But a key question still remains unanswered: Where is Gaddafi?

“I’m sure he left for the Chadian border a week ago, otherwise we would have already grabbed him in Tripoli,” local shopkeeper Abdul Rahman tells IPS.

Speculating about Gaddafi’s potential shelter, possibilities emerge from Algeria to Venezuela and from South Africa to Chad. Others venture further east.

“I might be wrong but he might well be in Syria. Whatever the case, I’m sure America is well aware of his whereabouts,” 17-year-old Ahmed tells IPS in English he has “picked up from American TV series.”

Following reports of four Italian journalists reportedly kidnapped in Zawiya on Wednesday after their driver was shot, concerns have grown about safety on the road to Tripoli.

“Journalists were jumping into cars bound for Tripoli in their dozens. I wouldn’t be surprised if there are more incidents like this,” Juma Khan, a Nalut resident, tells IPS.