Restoring the Cuban City with a French Colonial Air

CIENFUEGOS, Cuba, Aug 5 2011 (IPS) - The city of Cienfuegos, known in Cuba as the “Pearl of the South”, is unique for its spotless cleanliness, the orderly grid pattern of its streets, its 19th century architecture and its air of “Grande Dame” elegance. Now its past splendours, ravaged by time or left to deteriorate because of economic difficulties, are being restored. 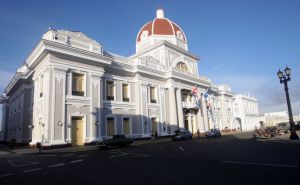 “If you see anyone throwing trash in the streets, you can be sure it’s a stranger from out of town,” a woman born and raised in Cienfuegos told IPS, with a touch of civic pride and ownership.

Located 250 km southeast of Havana, the city was founded by French settlers in 1819, and its historic centre was declared a World Cultural Heritage site in 2005 by the United Nations Educational, Scientific and Cultural Organisation (UNESCO).

Gaining acceptance on the UNESCO Cultural Heritage of Humanity list was not an easy task, said Irán Millán, an architect who has worked for the city for more than three decades. “At the outset people assumed that only ancient cities counted as heritage, not those as modern as Cienfuegos,” he told IPS.

The small but tenacious team responsible for protecting cultural heritage in Cienfuegos got their first taste of victory in 1995, when the city’s historic centre was declared a national monument. “We kept going in the conviction that our contemporary heritage had value, and we persuaded the authorities to appreciate that,” he said.

Millán has been the city conservator for Cienfuegos since the office for heritage restoration was opened in 2005. He said the fact that most of his fellow architects trained in Italy influenced Cuba’s policy of preserving buildings without evicting the people who live in them, so that the residents reap the benefits of urban renewal.

“We cannot remove the population from the historic centre; that would take all the life and joy out of it,” he said. The strategy puts more pressure on the meagre resources available, and sometimes only façades of buildings have actually been painted in the “cuarterías” (tenements) in the heritage zone, where hundreds of families live in crowded conditions, all looking forward to a better life.

The policy of the office is for businesses and organisations in the historic centre to contribute the funds they internally allocate to conservation, towards the heritage restoration and development plans designed by this authority.

“If a firm wants to renovate premises, we give them the go-ahead on condition that they cooperate with the heritage office’s plans, and undertake the repair and renewal of the sidewalk and specified housing units in the vicinity,” he explained.

So far, resources have permitted the restoration of 46 percent of the 70-hectare World Heritage zone and 47 percent of the 90-hectare national monument area. Improvements have been made to 1,480 homes and 146 workplaces, and 45 “cuarterías” have been partially or totally renovated.

Coordinated efforts are helping to realise the “dream project” of pedestrianising Street 29, previously called Santa Isabel Street, and restoring it “just like it used to be,” said Millán. This thoroughfare connects the colonial-era pier with Martí Park, a large open space at the centre of the city street grid, named for Cuban national hero José Martí, that was once the “plaza de armas” or military drilling ground.

The remodelling of Street 29 will provide space for self-employed people engaged in private enterprise, a growing sector in Cuba as the state drastically reduces its payroll, on the rationale that local people will have a vested interest in looking after public property.

The project also includes an art gallery, pharmacy and coffee shop, to be ready when the newly-restored pedestrian street is completed.

Eighteen families living in a “cuartería” close to the coffee shop are also pitching in with a will. “We are working for better conditions. We will have more space and our walls and roofing will be solid, and we will have separate water pipes supplying each household,” Oslayda Miranda, who lives with her married son and two grandchildren, told IPS.

According to Miranda, at least one member of each of the families must work directly on the reconstruction, on contract to the Cuban government, which supplies the building materials, including bathroom fittings. “But in fact we all work: I help my son do the plastering, and I also do the cooking,” she stressed.

“It’s very hard work and we still have a lot to do. What is being rescued here is human beings, rather than bricks and mortar,” said Millán, the city conservator.

Cienfuegos contains architectural gems like the Thomas Terry theatre, the Cathedral of Our Lady of the Immaculate Conception, the government palace, and the Lion House, so called because of its imposing feline statues.

And then there is the Paseo del Prado, leading from the town entrance to the Malecón – the seaside promenade around the bay – which after sundown is a popular spot for lovers’ trysts. Above the normally calm waters of Cienfuegos bay, the fortress of Our Lady of the Angels, erected for protection against Caribbean pirates, stands guard over the city.

“Recovering our heritage is not the same thing as worshipping the past. We are committed to improving people’s quality of life,” said Millán. This has awakened interest in conservation and restoration work in Cienfuegos, he said.

The office of heritage and restoration relies on state funding for its work, so the projects department has developed its own strategies to channel “the support of culture-loving organisations and individuals who want to help raise our people’s standard of living, whether or not they identify politically with Cuba,” he said.

The trades school, which is being rebuilt by its own students, trains young people in the special skills needed for the heritage office’s restoration work.

Millán said the school is a shining example of harmonious coordination of the efforts of different individuals and groups to employ young people who were neither working nor studying and reintegrate them into society, with guaranteed jobs at the end of the process. In Millán’s view, “That is the highest accomplishment of all, in addition to getting the students to appreciate and relate to their local heritage,” he said.

The official hopes his office will qualify as a “special treatment unit” in next year’s budget, with greater financial control and independence that would confer more stability and sustainability on its projects.

If funding is placed on a more favourable footing, the Fernandina Radio station, run by the heritage restoration office, might enjoy some expansion. At the moment reception of the radio signal is limited to the main shopping avenue in Cienfuegos. The station airs publicity and news about the historic centre for one hour every morning, and once an hour it plays music by Cuban singer-songwriter Benny Moré (1919-1963).