NEW YORK, Oct 8 2011 (IPS) - It was a political sensation: 8.9 percent of the 1.53 million Berliners who participated in the city-state parliamentary elections on Sep. 18 (overall turnout was 60 percent) voted for the Pirate Party (Piratenpartei). 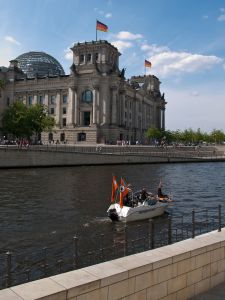 The first constitutive session in the Berlin House of Representatives will not take place until Oct. 27, but excitement has remained high over the new political force among other parties, political scientists and the media.

“The punch line to a joke, or an exciting new form of online democracy?” asked the New York Times two days after the Pirates’ electoral upset, while Spiegel Online, one of Germany’s leading news websites, characterised them as “The New Rebels.”

Angela Merkel, German chancellor and head of the governing Christian Democratic Union (CDU), said in an interview with the national social network StudiVZ, “The existence of the Pirate Party is a reason for us to especially consider questions concerning the internet and also consequently questions about the copyright and basic rights.”

Dr. Gero Neugebauer, a professor of political science at the Free University of Berlin, told IPS, “If they become a representative of a relevant conflict, for example concerning the relationship between politics and the Internet… and find sufficient social support in this field, their influence will grow.”

But what is the agenda of the Pirate Party? Can they influence the political scene either in or outside of Germany? And what’s driving their popularity?

The first Pirate Party (Piratpartiet) was founded on Jan. 1, 2006 in Sweden by Rickard "Rick" Falkvinge (born Dick Augustsson) as a reaction to the 2009 suit against the The Pirate Bay – a Swedish website that hosts links to allow users to share multimedia and software.

The Party has since almost doubled in size to more than 50,000 members, which makes it the third biggest party in Sweden.

Inspired by the Piratpartiet, more than 30 other Pirate Parties with the same name and similar goals have been founded worldwide, forming the Pirate Parties International (PPI). One of them was the "Piratenpartei" of Germany, the first Pirate Party to win seats in a state parliament anywhere in the world.

"We are in contact with other European countries," Ben de Biel, spokesperson for the Berlin Pirate Party, told IPS, "but also with Pirates in Brazil, Australia or Canada."


“Pirate Party: 847,870 voters like that,” stated one of the campaign posters the Piratenpartei put up in Berlin, in reference to the “like button” of the world’s leading social networking site, Facebook.

The party and its youthful candidates are using language that especially young voters understand and can identify with.

“We are young and fresh,” Ben de Biel, spokesperson for the Berlin Pirate Party, told IPS.

The Pirates identified and tapped into “a disenchantment of the voters with the established political parties, because they primarily talk about themselves or the people, but not with them,” de Biel said.

“The voters are hardly able to understand decisions of political parties because of missing or non-transparent information given by the established parties.”

This is one explanation. The political climate in the German capital is another.

“The rapid social change and upheaval in Berlin during the last 10 years has created enclaves of Pirates supporters that do not exist in comparable size in other cities,” Neugebauer said.

“The lifestyle in these communities is influenced by a libertarian ideology on one side and often by precarious circumstances on the other, which is why a strong identification between these structures and their political representatives exists,” he said.

Like its Swedish model, the Piratpartiet founded in 2006, and more than 30 Pirate Parties in other countries, the main goals of the Piratenpartei are guaranteeing freedom of information and privacy rights, the reform of copyright and patent laws, and government transparency.

In contrast to its earlier years, the Piratenpartei no longer focuses as heavily on internet and technology issues.

“Political strategies for the internet, software and so on are useful tools which can and will advance social developments,” De Biel said. “But they are not living, eating or other things. That is why we did not campaign as a technology-savvy party, but clearly expressed that we [are familiar with other issues] and offer technical solutions to them.”

"We assume that the other parties will firstly await what questions we will ask, how we will behave – and then they will react and accordingly consider a strategy," Jan de Biel said in response to a question about how other parties will respond to the new power in the Berlin City Parliament.

But some representatives have already weighed in. Renate Künast, leader of the Parliamentary group of the Green Party in the German Bundestag, mentioned a possible coalition with the Pirates "to pull them a little closer to the bourgeoisie, so they will not run again and come through on the next Berlin elections. Also Pirates can be resocialised," the politician said during a breakfast event.

Even though Künast later said her statement was a "joke", the media response sank their teeth into it – prompting Christopher Lauer, member of the Parliamentary group of the Pirate Party in the Berlin City Parliament, to write her a personal email that he also published on his website.

In the email, he draws a parallel between his party and the Green Party of the early 1980s. Many journalists and political seem to agree that the Pirate Party now has the rebel image once attached to the Greens.


The Pirates’ election posters addressed a wide range of issues. “Drug Policy instead of Drug War”; “I want to love like I am”; “Voting rights for all Berliners – no matter what age or ethnicity”.

But while the Party’s objectives are broad, they boil down to two main themes: government transparency and citizen empowerment.

To practice what they preach, the Piratenpartei publishes its account balance on its website. As of May 26, the party’s assets were 213,116 euro and 51 cents.

Impact in Berlin and Germany

The objectives of the Piratenpartei appear both admirable and ambitious. But can the party have a real influence on Berlin politics? And what significance does their electoral effect have for Germany and the rest of the world?

“Every party in a state parliament in general has the opportunity to impact politics, even though the chances for the opposition are worse than those of the parties in power,” Neugebauer said. “The pirates attracted the attention of the media and communicated the impression of efficiency. How realistic this is remains to be seen.”

The electoral success of Berlin’s Pirates and the associated media coverage have clearly broadened the party’s popularity in Germany. According to an online poll by the opinion research institute Emnid, commissioned by the conservative German newspaper Bild am Sonntag, seven percent of voters would cast their ballots for the Piratenpartei.

This impacts not just the Party itself, but also the established coalitions.

The coalition between the Social Democrats (SPD) and the Green Party (die Grünen), which was ranked as promising for the nationwide elections in 2013, no longer has a majority; the Liberal party, which constitutes the government together with the Christian-Democrats (CDU/CSU), would not even enter the parliament.

New coalitions, maybe with the left-wing party die Linke or even the Pirates, could become necessary.

“Long-term predictions cannot be made as long as the Pirates do not pass their practical test in other federal states and the Bundestag elections of 2013,” Neugebauer said.

What is clear is that the focus on internet-related issues and the young and modern appearance of the Pirates will continue to have an influence – directly, by gaining seats in state or national parliaments, and indirectly, by pushing other parties to address themes like internet regulations, copyright issues and government transparency.