BRAZIL: Reality of Militias Is Fiercer than Fiction

RIO DE JANEIRO, Nov 1 2011 (IPS) - When state legislator Marcelo Freixo received death threats for combating militias made up of off-duty police in Rio de Janeiro, his real life took on the form of the character portraying himself in the Brazilian Oscar hopeful “Tropa de Elite 2”. 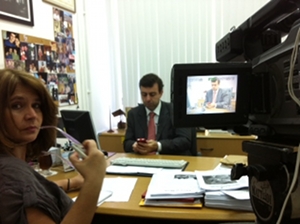 This was not the first time Freixo, of the opposition Socialism and Freedom Party, had been threatened since 2008, when he became the chair of a parliamentary commission of inquiry (CPI) investigating the militias – squads of rogue police who have formed illegal vigilante gangs – in the Rio de Janeiro state legislature.

Nor was it the first anonymous tip about a plot against his life. But the death threat Freixo made public Wednesday Oct. 26 was also aimed at Rio de Janeiro’s secretary of security, José Mariano Beltrame.

Freixo has taken greater precautions since the August murder of Judge Patrícia Acioli, who was known for taking a hard line against militias and corrupt police. A military police battalion commander and several military police officers have been jailed for the assassination.

“If they can kill a judge, they can easily kill a lawmaker, a prosecutor or a secretary (minister). There can be no doubt about their criminal capability,” Freixo told IPS.

“There are many conflicting political and economic interests. And these groups are very violent. They have plotted the deaths of several authorities, including myself,” because of the CPI investigation, he said.

Thanks to the probe, over 1,000 people have been investigated and 500 have been jailed, “including some important people,” Freixo said. Among those tried were a state legislator and several city councillors from Rio de Janeiro and two nearby cities, Duque de Caxias and Nova Iguaçu.

The militias, which Freixo compares to Italian mafias, bear the social and geographical marks of Rio.

Their territories are the crowded “favelas” (shanty towns) clinging to the hillsides, where they charge “extortionate fees” for providing security, and they control illegal businesses like the distribution of bottled gas, cable television services and informal transport.

The militias are heavily armed, and their leaders are state security agents like active duty or retired police, military troops, firemen and prison guards, which makes them “a criminal branch within the state,” Freixo said.

A single one of the 170 militias investigated by the CPI – now totalling 300 – was making 97,000 dollars a day. “That’s a lot of money. It can buy many weapons and many people,” said Freixo, who currently chairs another commission investigating arms dealing, munitions and explosives in Rio de Janeiro state.

In his view, these illegal groups “represent the greatest threat to public security today,” because they commit crimes “within the state, and have plans to occupy the corridors of power,” he said.

These features were woven by filmmaker José Padilha into “Tropa de Elite 2” (Elite Squad 2: The Enemy Within), with screenplay by Bráulio Mantovani and starring Wagner Moura as the famed “Roberto Nascimento”, a captain of an elite battalion of Rio de Janeiro military police who is promoted to undersecretary of security.

In contrast to the first “Tropa de Elite” film, which is about drug trafficking and police corruption, there is a different enemy in the sequel.

“As drug traffickers are driven out of the favelas, the police change their behaviour. Instead of partnering drug trafficking and sharing its spoils, the police realise that it is more lucrative to behave like a mafia, dominating the poorest communities and demanding payment for a range of services,” Padilha told IPS.

Now the police “control the favelas, like the mafia controls territories in New York or Italy,” with consequences that Padilha regards as unique.

“The drug trade never had the political influence to get councillors, provincial lawmakers and federal legislators elected. But the militias have done this. They are the true face of organised crime,” said the director of Brazil’s top blockbuster, seen by 11 million people so far.

Now reality and fiction begin to merge. “Fraga”, a history professor who becomes a provincial legislator, like Freixo – who was the inspiration for the character played by Irandhir Santos – is the victim of an attack by a militia in the film, which shows the illegal groups’ expansion of power and territory.

With regard to the exceptionally large number of people killed by the police in the state of Rio de Janeiro, Padilha said “they kill more than 1,000 people a year, while in the whole of the United States the police only kill 250. It’s crazy.”

Padilha, the head of a movement of artists warning “there will be an uproar if anything happens to Freixo,” said the only solution is a reform of the police force with better pay and training.

Freixo recognised “the good work” carried out by the Rio de Janeiro state government, which uses the civilian police to clamp down on the militias. But the only effective way to combat the groups is to “take away their economic power and their territories,” he said.

“The militias are mafias, the militias are a power within the state, not a parallel power. Throwing a few members in prison and combating the groups with the police alone is not enough,” he said.

Freixo is now constantly surrounded by bodyguards and travels in an armoured vehicle, among other measures for his personal protection. He sees it as the price he is paying for merely doing his job.

Padilha’s film conferred visibility on a problem that is currently “being debated in depth throughout society,” Freixo said.

“The result is extraordinary, because a great deal can be learned from the political struggle in Rio de Janeiro: it is the struggle to construct a certain perception and to break down other perceptions and concepts,” he said, although he did not presume that this should necessarily be the goal of art.

“Tropa de Elite 2” is a very “serious” portrayal of the militias, Freixo said. In preparation for the film, the director, screenwriter and cast took part in all the sessions of the CPI.

But the reality is “much worse,” he said.