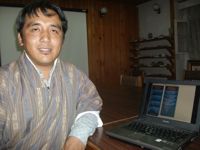 While the UN climate change negotiations launched in 1995 and resuming for their 17th annual session in Durban in South Africa on Nov. 28 have so far failed to generate sufficient action to slow global climate change, the four East Himalayan nations are already beginning to feel its destructive impacts. The summit aims to enable them to face related problems jointly.

“The summit is the culmination of over two years’ work by senior officials from the four participating nations,” Dr. Tashi Jamtsho, the young Bhutanese civil servant who is executive secretary of the Bhutan Climate Summit Secretariat told IPS in an interview at his office here.

“The summit has three main goals,” he explained. “They are to adopt a roadmap for adapting to climate change, to highlight the issues we are facing internationally, and to create partnerships, networks and relationships to share information, experience and skills. Summit partners are the government of Denmark, the World Wildlife Fund, the MacArthur Foundation and ICIMOD – the Nepal-based International Centre for Integrated Mountain Development.

“We have approached the climate change challenge holistically, focusing on four interrelated key topics – food security, protection of freshwater systems, energy security (including development of renewable sources) and the protection and sustainable use of biodiversity. Technical meetings have been held on each topic with the four nations submitting national reports on each sector. This work underpins the Regional Framework of Action and related budget formally adopted by senior officials from our four nations who met here on Oct. 23.”

The documents are being reviewed by a meeting of ministers Nov. 18, then transmitted for formal endorsement by the prime ministers’ summit the following day.

A slew of scientific studies including the Fourth Assessment Report of the Intergovernmental Panel on Climate Change (2007) show that over the past two decades the Himalayan region’s rainfall and weather patterns have become increasingly erratic, putting biodiversity, wildlife, soils, water resources and thus food production and rural livelihoods under growing strain.

The southern and eastern flanks of the massive mountain range are the ‘watertower’ for over 1.3 billion Indians, Nepalis, Bangladeshis and Bhutanese. Rising temperatures have set off an accelerating process which is shrinking the huge glaciers. If continued, ever growing quantities of ‘melt water’ could set off catastrophic Glacial Lake Outburst Floods (GLOFs), as thousands of mountain lakes start to burst their banks. Further ahead looms the dreadful prospect of permanent drought – as the local climate dries out.

The Regional Framework of Action however will need to be converted into actual policies and measures, but civil servants are still negotiating on implementation mechanisms to follow up the summit decisions, including whether, and if so, where to locate a permanent secretariat. Agreement at the summit is not certain, Tashi admits. “In that case there should be a provision in the summit declaration for further consultations.”

Although civil society will not be admitted to the high-level meetings, a six-day parallel event Nov. 14-19 features exhibitions and seminars by regional environmental NGOs as well as a youth rally organised by ICIMOD.

Dago Tschering, research officer at Bhutan’s only environmental NGO, the Royal Society for the Protection of Nature, told IPS that “NGOs from the four countries have made important contributions to developing each country studies and positions on the four summit topics. We have also worked collaboratively on this through our membership of Climate Action Network South Asia – the regional node of the 700 strong global network of NGOs campaigning on climate change since 1990. We expect our roles to be enhanced by the summit outcome.”

While heads of several leading UN agencies as well as European Climate Action Commissioner Connie Hedegaard have declined the invitation to attend the summit, high-level representation of major donor countries is still hoped for. Donor support is seen as a critically essential input to fulfilling the roadmap’s many goals – though the weak decisions on climate change finance emerging from the G20 summit in Cannes on Nov. 3-4 are hardly encouraging.

Nor is the information emerging at the Dhaka Forum about donor aid being ‘recycled’ as climate finance, instead of additional allocations being made, in accordance with agreements on a three-year, 30 billion dollar ‘fast start financing’ commitment made at the 2009 UN climate change conference in Copenhagen. In his speech to the forum UN Secretary-General Ban Ki-moon urged that “governments must find ways — now — to mobilise resources up to the 100 billion dollars per annum pledged. An empty shell is not sufficient.”

He was referring to the decision taken at last year’s UN climate change conference in Cancun, Mexico, to set up a Green Climate Fund whose resources would reach 100 billion dollars a year by 2020. The Fund’s functioning and financing will be discussed at the Durban conference.

The Durban conference will be informed of the Himalayan summit results, says Tashi. “We plan to showcase the outcome at a high-level event,” he told IPS, and then adding with true civil service caution, “if the outcome is really successful.”