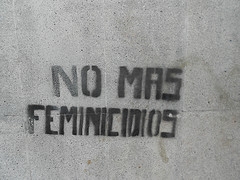 MEXICO CITY, Nov 23 2011 (IPS) - Sexual violence against women in Mexico is on the rise, alongside the escalation of violence between police and soldiers and the drug cartels, women’s rights activists warn. “We have seen an increase in sexual harassment, groping, gang rape, and rapes of girls,” Imelda Marrufo, founding director of the Red Mesa de Mujeres, a network of women’s groups in Ciudad Juárez, on the U.S. border, told IPS.

The National Citizens’ Observatory for Femicide (OCNF), which groups 43 human rights and women’s organisations, documented around 7,000 cases of rape in 10 of Mexico’s 32 states in 2010. However, the real total is assumed to be much higher as rape is considered one of the most underreported crimes.

The average age of the victims was 26, the report adds.

In cities with high crime rates like Ciudad Juárez, invaded by drug cartels, the police and army troops, groups of men frequently seize girls and women from the streets, rape them, and release them – or toss their bodies in the desert or garbage dumps.

“It is a very serious situation,” said María Estrada, head of the OCNF and of the gender violence and human rights programme of Catholics for the Right to Decide. “The cases aren’t investigated, and impunity rules. The organisations have asked us to document the cases,” she told IPS.

One high-profile case of sexual violence against women occurred in the town of San Salvador Atenco, 45 km east of the Mexican capital, during a clash between local residents and police in May 2006.

During a violent operation to evict street vendors from an unauthorised area of the town, 47 women were arrested, and at least 26 of them were beaten, raped and tortured sexually.

No officer responsible for the abuse has been held accountable.

Because the women have failed to find justice in Mexico, 11 of the victims turned to the Inter-American Commission on Human Rights (IACHR), which accepted the case.

The police repression in San Salvador Atenco “has become a pattern; it has been repeated in other places,” Edith Rosales, 53, one of the petitioners in the case, told IPS. “Women are used, they are forced to participate in the drug trade and are used sexually. Their normal lives are stripped away from them.”

“Violence against women is rooted in society,” Isabel Valriveras, a representative of the General Council of Spanish Lawyers (CGAE), told IPS. “Women can be tortured, raped and killed; they are considered the lowest of the low in society, and are thrown out like scraps.”

Valriveras forms part of the international mission “for access to justice for women” which is touring Mexico, Guatemala and El Salvador Nov. 17 to 24 to assess the situation of gender violence and measures taken to combat it, in the run-up to the International Day for the Elimination of Violence Against Women, celebrated Nov. 25.

The Mexican state was found guilty three times in 2009 and 2010 by the Inter-American Court of Human Rights for violations of the rights of women.

The first ruling, handed down in November 2009, was for the 2001 murders of three young women in Ciudad Juárez, in what is known as the Cotton Field case for the area where their corpses were found along with the bodies of several unidentified women.

And in August 2010, the Court found the state guilty in two separate rulings for failing to protect the rights of two young indigenous women, Inés Fernández and Valentina Rosendo, who were raped by soldiers in 2002 in the southern state of Guerrero.

After conservative President Felipe Calderón took office in December 2006, he deployed the armed forces in a major offensive against drug trafficking and organised crime. The ensuing “war on drugs” has claimed the lives of at least 50,000 people, according to press reports.

According to the defence ministry, 159 members of the armed forces are under investigation by the military courts for abuse of authority, torture or murder, another 57 are facing prosecution and seven have been sentenced.

For its part, global rights watchdog Amnesty International reports that at least 60 indigenous and peasant women have been sexually assaulted by soldiers since 1994.

“It’s not just the invasion of their bodies, but the violation they face because they are the mothers or wives and girlfriends of people involved in organised crime. And there are no clear signals from the state that gender violence will not be tolerated,” Julia Monárrez, a professor at the Colegio de la Frontera Norte (COLEF) research centre in northern Mexico, told IPS.

Monárrez was an expert witness for the prosecution in the Cotton Field case.

“We have not found justice in Mexico; impunity reigns here,” said Rosales, the petitioner in the San Salvador Atenco case before the IACHR.

From January 2010 to June 2011, 1,235 women were killed in just eight of Mexico’s states, while another 3,282 went missing in nine states, according to the National Citizens’ Observatory for Femicide.