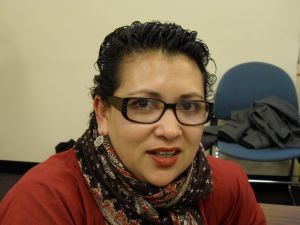 Today, activists continue to make the annual pilgrimage to U.N. headquarters in New York for the open debate on Resolution 1325, with the mission of “taking women beyond 1325” and taking part in collaboration, advocacy and action.

On Oct. 27, 10 women, each with a long history of working on conflict prevention and peace building, came from all over the world to speak at a panel near the U.N.

Their goal was to focus attention on the media’s portrayal of women and on the need to develop and strengthen the efforts of communicators, activists, peace and security analysts and advocates for conflict prevention and transformation.

They also sought to communicate the stories, the realities and the priorities from the grassroots level to governments, the media and broader civil society.

Sharon Bhagwan Rolls, who hails from Fiji, is the executive director of FemLINKPACIFIC: Media Initiatives for Women (www.femlinkpacific.org.fj), an organisation that advocates for Resolution 1325, community media, and women, peace and human security concerns.

As GPPAC’s regional secretariat for the Pacific region, Rolls was appointed gender liaison for GPPAC’s International Steering Group in 2009. She is also a member of the U.N. Civil Society Advisory Group on Resolution 1325.

IPS correspondent Mathilde Bagneres spoke with Rolls about female empowerment and what it means to take women beyond Resolution 1325.

Q: Can you introduce the FemLINKPACIFIC organisation? What is it trying to achieve for women? A: FemLINKPACIFIC emerged after the political crisis in Fiji in 2000. We are a feminist, media-based organisation, now working in the Pacific Islands, such as in Fiji, Solomon Islands and Tonga.

The basis of our work is advocacy, using media information technology in order to advance gender equality commitments and women’s right, and it’s about enhancing women’s visibility to address the lack of women’s representation.

Q: How do you think media can contribute to women’s empowerment? A: The role of media is, first of all, to be able to go more in depth into issues and to be able to understand those issues. When we are talking about peace and security, the voice of women has to be heard.

In content development, we should look at ways to diversify media’s content, so it is not just about five minutes news headlines to tell you what is happening in the world or who it is affecting. Media should go deeper into issues and give more time to women voices.

Q: What is FemLINKPACIFIC doing to foster change for women on a local level? A: The first thing that we need to understand is that when we try to make things change at the local level, it doesn’t happen automatically. It means working with women consistently, continuously to build trust, confidence.

We work in five borough communities in Fiji. We have seen a change as a result of being able to continue to mobilise resources to create a space for women to come together once a month, on what we call the “1325 days”, on the third Wednesday of every month.

They didn’t have the resources to do that by their own, so that’s the first change – giving them the resources for them to come together, have conversations and then make radio programs.

Things always evolve by the gathering of personal confidence and confidence in each other. Women realised that by sharing stories, when we lobby together, voices are stronger. They realized too that by telling again and again their stories about unresolved issues, it could make things change.

Q: Can you share with us an experience that illustrates how FemLINKPACIFIC can help women to express themselves and share their issues? A: I started meeting one particular woman back in 2006. She talked about the change along the riverbed and how it was affecting the food security, the economic security of women.

Women were fishing or collecting crabs to cook or to sell, and as the riverbed was being destroyed, they were losing that source of income or food. But she couldn’t raise that story using the traditional decision-making structures because she was a woman.

We have continuously documented that story; we knew that it was an unresolved issue. FemLINKPACIFIC got in touch with a government official and he came to meet that woman and the other women in the 1325 space and listen to them.

What the woman also told me afterward was that this way, she was protected. She wasn’t seen as the one who was causing troubles. It’s a story at the local level, but for me it demonstrates that one story, when we keep lobbying for it, can be taken into account.

Q: Do you think that international decisions can concretely help women to become peace builders? A: I think that international solidarity is really important. At the New York level, the greater visibility of the Pacific is a huge change. It is about the importance of recognising the specific issues of women in the developing states of the Pacific Islands, because they are distinctively different from Australia and New Zealand.

In Fiji, we should have elections in 2014. I think the role of the international community is to help the state and to give women a role as peace builders in this process of transition.

The international community should be a bridge between the state and women. It is not about imposing what they might think to be the right solution but it can be about assisting the work of civil society to be able to engage better with the state and vice versa.

The United Nations can help us to have a peaceful transition back to elections, but we should not stop by saying that elections will solve everything. We have work on the next step to sustainable democracy and peace, and women have to be part of it.