JOHANNESBURG , Nov 3 2011 (IPS) - For many months now, a hosepipe connected to a leaking cistern in Isaac Mooi’s outside toilet daily pours an estimated 100 litres of wasted water into the aged sewer system of the Emfuleni Municipality, in Vanderbijlpark, south of Johannesburg. 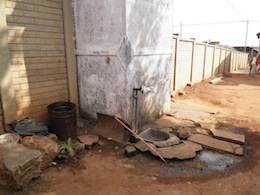 Emfuleni Municipality is now racing to save water as it loses three billion million litres annually through inefficient use and faulty taps. Credit: Busani Bafana/IPS

“I have been planning to fix the leak but I do not have the money to pay for the plumbing repairs,” said 77-year-old Mooi, one of many residents in Zone 13. This is an area in Emfuleni that loses water regularly.

Located in the province of Gauteng – South Africa’s economic powerhouse – the Emfuleni Municipality is challenged by water losses.

The municipality, which has over 1.2 million people, is now racing to save water as it loses three billion million litres annually through inefficient use, faulty taps, and leakages in its aged water system.

The Emfuleni Municipality is in one of South Africa’s oldest housing areas, which has six peri-urban townships including Sharpville, Sebokeng and Evaton. These townships were established during the apartheid era and lack facilities associated with towns of their size.

According to water planners, it is forecast that South Africa will face a severe water shortage by 2015 if the country’s current water use is not reduced immediately.

However, the high water leaks in the Emfuleni Municipality mean it has the dubious honour of having one of the highest rates of water losses, through leakages, in the country.

The municipality is now trying to decrease its water loss by using a pressure reduction system to reduce household leaks.

Dimakatso Malisa, the councillor for Ward 35, which includes Zone 13, said that while the municipality is working to save water, residents should play their part too.

“I have called meetings with residents to discuss the problem of water losses because we are all affected by water leaks as we pay for that water in our bills,” Malisa told IPS.

“South Africa is running out of water and we have to stop our children playing with water and we must report leaks immediately because the water seems to be free, but it is not,” he said. Currently households across South Africa have a free allocation of 20 kilolitres of water every month.

Under the partnership a baseline study on water use in priority areas will be done. A bulk sector flow metering system will also be installed to improve the accuracy of the water balance, and to identify priority areas for repairs of leaks and to monitor water savings.

Plumbing and fixtures in households and public infrastructure from leaking taps, toilets and household supply pipelines will also be repaired. Local plumbers will also be trained and an awareness programme on water conservation education, including water-wise gardening, will be rolled out.

“As Emfuleni sources its water from the Orange-Senqu catchment area, water which is saved in this municipality can be used somewhere else where water might be needed,” said Lenka Thamae, executive secretary of the Orange-Senqu River Commission.

The Orange-Senqu catchment or river basin also supplies water to other municipalities in South Africa, as well as neighbouring countries Botswana, Lesotho and Namibia.

“After successful implementation of the project, the design and idea can be replicated in many other municipalities in Southern Africa, which face the same challenges as Emfuleni,” said Thamae.

“We are all concerned with the equitable and sustainable use of the available scarce water resources across the entire transboundary river basin,” Horst Vogel, Programme Manager of the Southern African Development Community Transboundary Water Management Unit, told IPS.

“If water is being lost or wasted in one part of the shared river basin then this is at the expense of all people elsewhere in the basin,” Vogel said.

According to Peter Pyke, chief engineer in the DWA responsible for options analysis, every drop of water must be saved.

By the end of the third year of the project, this would equate to an annual reduction of 12 billion litres or some 7.7 million dollars in savings.

The South African government has tasked all municipalities supplied from the integrated Vaal River and the Orange-Senqu river basin system to reduce the water use by at least 15 percent by 2014. A decline of physical water losses as well as financial losses through theft, inaccurate metering and bill collection across the system is also anticipated.

According to GIZ, many municipalities in South Africa do not have the necessary capacity, instruments and resources to implement water conservation and demand management actions.