DURBAN, South Africa, Dec 5 2011 (IPS) - Efforts to establish water as an agenda item in its own right in climate change negotiations are gaining momentum in Durban, South Africa. Water experts say doing this will lead to a greater focus on developing policy, and attract more resources into the water sector through adaptation programmes. 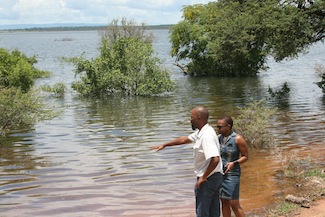 Access to water is an urgent issue here in the Southern Africa region. Credit: Mantoe Phakathi/IPS

“For every one of us, the first thing you use when you wake up in the morning is water, and when we are going to bed, it is water. Yet, it’s taken for granted,” says Chris Moseki, research manager at the Water Research Commission (WRC) in South Africa. WRC is a member of the Global Water Partnership (GWP) – a global alliance of organisations working on water issues.

Access to water is an urgent issue here in the Southern Africa region, where nearly 100 million people lack adequate access to water. Modelling by the Council for Scientific and Industrial Research (CSIR) in South Africa shows the region will become hotter and drier over the next 50 to 100 years, putting farms, industry, domestic water supply and natural ecosystems at risk.

International water experts and policy makers are concerned that planning for changes to water availability is not getting the prominence it deserves. Bai-Mass Taal, the Executive Secretary of the African Ministers’ Council on Water (AMCOW), says they are working to raise the profile of water within the framework of the United Nations Framework Convention on Climate Change (UNFCCC).

“We are saying to the parties, look: we appreciate what you are doing in other sectors, but without addressing water directly, all of that will be in vain,” says Taal.

At this point, water issues are being discussed by treaty negotiators as part of wider planning, prioritising and implementing of adaptation to a changing climate.

“The GDP of many countries in the least developed countries is dependent on water. More than 50 percent of food for the world will come from Africa in the future, and this is dependent on availability of water,” she says. “That is why this discussion should go beyond where it’s now.”

More than 70 percent of the Southern African Development Community’s population depends directly on farming, overwhelmingly on rain-fed agriculture. The CSIR’s projections are among many drawing attention to how predicted changes to rainfall, limited resources for adaptation and a lack of institutions and capacity to regulate river and stream flow will leave people in Southern Africa and across the continent extremely vulnerable.

Similar challenges are predicted not only for Africa, but across the world as weather patterns change, but Africa’s lack of irrigation and other infrastructure is a factor that magnifies the need for urgent intervention.

As rainfall patterns change, Africa is facing major crises. Millions faced famine in Niger and Mali in 2010 after drought hit farmers and herders. This year, the Horn of Africa has been facing its worst drought in 50 years and millions are suffering from hunger. According to the U.N. World Food Programme, some 12.3 million people in the Horn are in need of emergency assistance.

Rhoda Peace, the African Union Commissioner for Rural Economy and Agriculture, points out that when African leaders talk about climate change; they invariably talk about droughts and floods’, showing that water is already a high priority.

In 2008, African heads of state agreed to make water and sanitation a priority.

“Leaders agreed to allocate at least 0.5 percent of their national budget to water,” says Peace. “Now whether that is actually the case is another story, but some countries are doing very well and may reach their targets.”

Providing adequate access to water across Africa will cost billions of dollars. And for the many African governments which are failing to honour earlier commitments will not be able to raise the required amounts without support.

Simon Thuo, the Eastern Africa coordinator for GWP, says he is surprised that despite the clear need, even the African negotiating group’s proposals mention water only in passing. Along with other experts, he believes that if climate negotiations address management of this essential commodity specifically, it will not receive the necessary attention and funding.