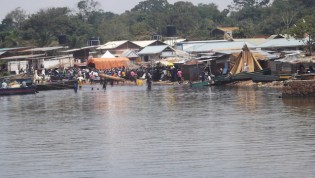 By Joshua Kyalimpa
Managing the impact of increased disasters due to climate change will only be possible if such efforts are led by local communities, say non-governmental organisations working in climate change.

By Joshua Kyalimpa
The nurse at Najembe Health Centre in Buikwe district says the centre’s supply of malaria drugs will be finished in two days. A malaria epidemic has hit the area and the demand for the drugs is high. But the centre, which serves the entire sub-county, will have to wait up to six weeks before their supply will be replenished.

By Joshua Kyalimpa
The Ugandan opposition has announced it will continue protests against rising prices for fuel, food and other essential commodities, undeterred by violent police repression of the previous two days of action.

By Joshua Kyalimpa
Beatrice Namuzibira’s class of 90 pupils is not even considered a large one, compared to classes in other schools. Universal primary education has filled classrooms beyond capacity across Uganda, putting a strain on teachers.

By Susan Anyangu-Amu and Joshua Kyalimpa
Regina Namukasa has been twice dispossessed – first when her husband died and his clan left her out when dividing up his estate, and again when she was denied a share in her father's land. But this time she's fighting back.

By Joshua Kyalimpa
In a small garden at the Entebbe Botanical garden, about 40 kilometres from Kampala, a few yellowish plants are trying to adapt to their new environment.

By Joshua Kyalimpa
HIV-positive Phiona* (19) had unprotected sex with her best friend and she prays that she did not infect him with the virus. She knew she should not have let it happen but Phiona was too scared to tell him her status, and the teenagers did not have access to condoms.

By Joshua Kyalimpa
The proposed media law is a monster, says Dr George Lugalambi, chair of a coalition fighting to preserve press freedom in Uganda. Publishers and journalists would have to apply annually for a licence, which could be revoked at will in the interests of "national security, stability and unity," or if coverage was deemed to be "economic sabotage."

By Joshua Kyalimpa
Mayuge district has 31,000 farming families served by just nine agricultural extension workers. In Wainha village, an internet centre run by the Busoga Rural Open Source and Development Initiative is more than filling the gap in assisting farmers.

ENVIRONMENT-UGANDA: Landslides – Experts Warn Worst is Yet to Come

By Joshua Kyalimpa
Fourteen-year-old Isaac Wadyegere of Bundesi village in Bududa district woke up to a rainy and chilly Monday morning and went to school as usual. But Mar. 1 was not a usual day in eastern Uganda.

By Joshua Kyalimpa
The collapse of the Uganda Railway Corporation 15 years ago opened up lucrative opportunities for privately-owned road transporters. But the high cost of maintaining the highways carrying heavy truck and bus traffic is leading government to take a fresh look at the rails.

By Joshua Kyalimpa
Few Ugandans are able to find a bank willing to loan them money to buy a house; in a culture where every man is expected to own his house, moves by Stanbic Bank to provide financing for home and auto purchases are welcome.

By Joshua Kyalimpa
The Electoral Commission of Uganda says if they tightened the noose around parties which fail to declare election funding, all of them would probably be deregistered.