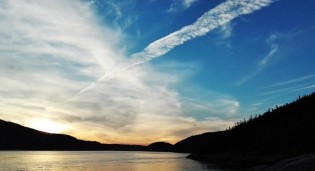 AUDIO: No Blue Economy Without Conserving the Oceans

By Terna Gyuse
Sabine Jessen is the National Director of the Oceans Program for the Canadian Parks and Wilderness Society. Speaking to IPS at the Sustainable Blue Economy Conference in Nairobi, she argues that we first need to figure out what we need to conserve, before we think about what resources we can still use without threatening the ecosystems we need to preserve.

By Terna Gyuse
Investment in rural infrastructure and support for Africa's millions of small-scale farmers have increased in the past decade. But as these farmers begin to see increased yields, the question of better access to markets comes to the fore.

By Terna Gyuse and Isaiah Esipisu
African leaders should take note of the lessons learned from the Arab Spring and realise that ensuring good governance and food security will avoid crises on the continent, says Kofi Annan, chairman of the Africa Green Revolution Alliance.

By Terna Gyuse
Critics call it "the Secrecy Bill". And it comes at a time when several African countries are adopting promising new legislation on access to information. But campaigners say South Africa's draft Protection of Information Bill represents a step backwards.

By Terna Gyuse
Members of the emerging economy grouping known as IBSA - India, Brazil and South Africa - have joined China and Russia in opposing measures against Syria.

DEATH PENALTY: Perception of Crime an Obstacle to Abolition

By Terna Gyuse
The past year has seen mixed fortunes for activists working towards abolishing the death penalty in Africa. Togo and Burundi joined the ranks of African states that have removed capital punishment from their statutes, while Gambia extended its application to new offences.

SOUTHERN AFRICA: Benefits of Working Together on Water

By Terna Gyuse
The river basin organisation people are gathered in Botswana again: the theme this year is "benefit-sharing", an approach to allocating water that, it is promised, will accomplish nothing less than to make more water.

By Terna Gyuse
The business and political leadership of the world's strongest emerging economies meet this week in Brazil. Are these gatherings of the champions of a new and fairer global economy, or of new pretenders to the old throne?

By Terna Gyuse
The U.N. Climate Change Conference enters its final week under a cloud of uncertainty as the Africa Group led a protest of the developing world against a perceived attempt to abandon the Kyoto Protocol.

By Terna Gyuse
The midpoint of a conference on climate change in which tremendous hope has been invested; unsurprising then that demonstrations of popular desire for decisive action against global warming took place around the world.

WATER-BOTSWANA: A Garden In the Heart of the Village

By Nicholas Mokwena and Terna Gyuse
Look, there's no drama with the borehole in Mokobeng. And that's the way it should be.

By Stanley Kwenda and Terna Gyuse
Desperate for investment to lift its moribund economy, the Zimbabwe government welcomed hundreds of prospective mining investors to a conference in Harare this week.

By Diletta Varlese, Terna Gyuse, and Joyce Mulama
No gathering hosted by Libyan leader Moammar Gaddafi is ever dull, and the Thirteenth Ordinary Session of the African Union, concluding in Sirte, Libya today has not disappointed.

By Rosemary Okello and Terna Gyuse
The right to the highest attainable standard of health: not the most fashionable of human rights, but the limits on people's enjoyment of their right to health often coincide with continuing inequalities behind claims of economic growth or political reform.

By Terna Gyuse
Water from a storage pond at Barrick Gold's North Mara mine in Tanzania is seeping through containing walls, leading local villagers to fear their water sources are contaminated.

AGRICULTURE-AFRICA: ‘Bring Back a Culture of Sharing’

By Terna Gyuse
"Africa has the singular and tragic distinction of being the only place in the world where overall food security and livelihoods are deteriorating," reads the website of the Alliance for a Green Revolution in Africa (AGRA), an initiative to boost food security and agricultural productivity on the continent.

MINING-WEST AFRICA: Ending the Race to the Bottom

By Terna Gyuse
Resource extraction in West Africa has often coincided with environmental degradation and brutal conflict. Activists further charge that the agreements between governments and transnational mining companies do little to benefit local communities.

Q&A: World Social Forum is Not a Static Platform

By Terna Gyuse
Onyango Oloo was the national coordinator of the Kenyan Social Forum in 2007 when the last global World Social Forum (WSF)took place in Nairobi. As another gathering of activists from around the world unfolds in Belém, Brazil, IPS asked Oloo for his views on the Forum's past and future.
Next Page »
ADVERTISEMENT ADVERTISEMENT