CAPE TOWN, May 18 2009 (IPS) - Water from a storage pond at Barrick Gold’s North Mara mine in Tanzania is seeping through containing walls, leading local villagers to fear their water sources are contaminated. 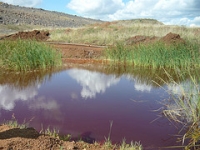 Containment pond at North Mara: villagers complain that water from the mine is affecting crops and livestock; Barrick says no water is discharged into the environment. Credit: Chacha Wambura/Foundation HELP

Monitoring equipment detected abnormally low pH levels in the Tigithe River, in the Tarime district in the north of Tanzania beginning on May 4 following a period of heavy rainfall. Villagers reported that the water had turned a reddish colour.

District councillor Agostino “Neto” Sasi told IPS over the phone that trees along the river banks were dying and that three children and an old man experienced skin problems after contact with the water.

“The river has overflowed its banks into the fields and caused crops such as millet, maize and sorghum also to dry up. About five cows have died from drinking water from the river.”

Chacha Benedict Wambura, executive director of Foundation HELP, an NGO based 100 km away in the town of Musoma, has been to see the mine. Foundation HELP works on advocacy on a range of issues including resource management, health, sustainable agriculture and gender equality.

“The community has testified that they have seen dead fish in the river although when we visited the place on Thursday [May 14] we did not find any fish due to the heavy rains. If there are any dead fish, they can be found downstream,” he told IPS.

“We had the opportunity to visit the affected areas, where the water had spilled and we went up to the mouth of the Tigithe river where the water from the ponds owned by the gold mine were dumping water directly into the river.”

Though the mine is described by Barrick as operating at zero discharge, meaning no water is released back into the surrounding environment, villagers have long complained that the mine has negative effects.

“This problem began in 2006. The impact of the contaminated waters of Tigithe river is huge,” according to Machage B. Machage, councillor of Matongo ward. “Cattle are dying from drinking from the river, fish are dying, plants near the river have all dried up and the community is complaining.

“The problem intensifies during heavy rains because the water spreads to a larger area, with crops wilting, and the community making big losses.”

The May 9 contamination was reported to local authorities, but failing to get a response, Bogomba Rashid, the chair of the Kewanja Village Council, also contacted Barrick headquarters and national environmental officials in the capital, Dar es Salaam.

Barrick responded quickly, dispatching experts to the scene. The company’s environmental and water specialists found the river water to be acidic. A sample taken approximately a kilometre downstream found a pH level of 4.8, more than ten times more acidic than the typical pH of rainwater.

“The decreased pH levels are believed to be the primary result of water moving from containment ponds designed to contain water that comes in contact with waste dumps,” Barrick’s PR and communications manager, Teweli K. Teweli wrote in a May 14 statement.

The discharge is from a pond containing acidic runoff water from the mine’s waste rock.

“To avoid seepage from the ponds, they are lined with a special PVC plastic liner material that is laid at the base of the pond. However, the liner material has recently been damaged and compromised by thieves. A secondary source is the adjacent temporary ore stockpile, from which water with increased acidity drains as a consequence of rainfall.”

The company statement says the increased water flow in the river has diluted the discharge, and pH levels have returned to normal, but it is also taking further measures.

“Work to intercept and divert water coming in contact with the river is scheduled for completion in the next week. Several options are under active consideration to address the situation in the long term,” said the company.

Councillor Machage rejects the company’s accusation of theft of plastic liner by the community. “It’s not possible for anyone to steal the plastic. And if they knew someone was going to steal the plastic, then they should have replaced it. Why didn’t they replace the plastic? Or put concrete?”

Responding to IPS via email, Teweli insists the company has done everything in its power to maintain the lining.

“PVC liners are cut into manageable pieces and pulled from below the water level. They are mainly used for roofing in the local community,” he writes. “The PVC liners in the affected ponds have been replaced more than four times in less than a year.”

Relations between the company and people in surrounding villages are not the best, stemming both from dissatisfaction with the levels of compensation paid to those displaced by the mine when it was established in 2003 and from the belief that the mine has negatively impacted the environment.

“We as a council have commissioned our experts to assess the situation but we are incapacitated because we lack equipment to do the job,” Machage said.

“What we have done is to request for experts from the government to come and take samples of the water for testing. They have repeatedly come back with reports saying that the water is clean, while people continue to suffer. We challenged them to drink the water to convince us that it is clean and they refused fiercely”.

At the time of writing, officials from Tanzania’s National Environmental Council had still not visited the site.

*Joyce Mulama in Nairobi and Terri Ayugi in Cape Town contributed to this report.

(*The story moved May 18 erroneously said water began overflowing from the containment pond at the North Mara mine on May 9. In fact, the acidic water discharged into the river was seeping through containing walls of the pond, and was first detected by monitoring equipment downstream on May 4.)