CAPE TOWN, Sep 16 2011 (IPS) - Critics call it “the Secrecy Bill”. And it comes at a time when several African countries are adopting promising new legislation on access to information. But campaigners say South Africa’s draft Protection of Information Bill represents a step backwards. 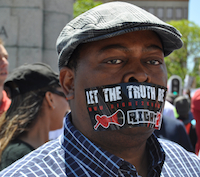 The Right2Know Campaign will march on Sep. 17 to parliament in protest against the Secrecy Bill. Credit: Davison Makanga

Intended to replace an apartheid-era law on official secrets, the Protection of Information Bill has faced severe criticism from opposition parties, journalists and ordinary citizens. They have challenged the broad powers initially granted government to classify information as secret and a vague definition of “national interest” that justifies classification.

Under sustained public pressure, the government heavily revised the bill, but campaigners remain opposed to the lack of a public interest defence for disclosing secret information and the retention of draconian penalties for even possessing information deemed sensitive.

“Even though the committee added limited whistleblower protections, many other clauses remain under which they could be prosecuted,” says Sithembile Mbete, a member of Right2Know Campaign, a civil society coalition created to oppose the bill.

On Saturday, the campaign will march to parliament in Cape Town in protest; a candlelight vigil is planned for Sep. 20, the night before the bill is expected to be tabled in the legislature.

Elsewhere on the continent, there are positive signals that governments are embracing principles of freer access to information. Nigeria adopted a progressive freedom of information law in 2010; Uganda passed an Access to Information Act in 2005 and in 2010 the country debated the Whistle Blowers Protection Bill 2010, which aimed to create an enabling environment for citizens to freely disclose information on corrupt or improper conduct in public and private sectors.

In Kenya, activists and lawyers are pushing government departments to bring in changes to comply with its new constitution, which grants citizens access to information held by the state.

Paul Waihenya, a journalist based in the Kenyan capital, Nairobi, says the new constitution’s provisions on access to information represent a giant leap forward by the government in terms of transparency and accountability. But he points to a recent instruction from the Ministry of Internal Security warning local authorities against speaking to the media, after a local official in the north told the press about the severe famine gripping parts of the country.

“The interdiction move against the chief who gave (the press) information about his community is a reminder that this right to access information is not (yet) absolute,” he told IPS.

Other observers say it is still impossible to get vital details of public finances or the release of official reports into corruption investigations. Court action has been launched to challenge delayed responses to access to information requests as well as to fees that are an obstacle to ordinary citizens’ access to information such as land ownership records and vehicle registrations.

But Laura Neuman, project manager for the Carter Center’s Access to Information Project, sees signs of progress on the continent. She points to the central role played by Liberian civil society – actively supported by her centre – in the drafting of that country’s new Freedom of Information Act.

She told IPS by phone from Washington that this engagement will help to ensure that the legislation will have positive impacts in ordinary people’s lives.

“It’s a myth to think these are laws for the media or the elite, because frankly those groups already have access to information,” she says.

“We have seen (access to information laws) used in transformative ways all over the world.

She says an essential component of expanding rights is to establish processes by which governments provide information – and where they fail, to give citizens a clear and accessible way to demand it.

It is ironic that South Africa is moving in precisely the opposite direction.

“The pending enactment of the Protection of Information Bill means South Africa has lost its leadership on matters of advancing the right to information on the African continent,” says Mukelani Dimba of the Open Democracy Advice Centre in Cape Town.

“In the decade since the adoption of South Africa’s freedom of information (FOI) law, the Promotion of Access to Information Act (PAIA), South Africa had been an important reference point for other countries on the continent to draw lessons from regarding the operationalisation of the right of access to information in the context of a developing African country,” he says.

Dimba says good legislation has not been matched by implementation. The Right2Know Campaign’s Mbete agrees.

“The problem is that in many ways PAIA hasn’t been quite functional and the implementation of the act has been problematic,” Mbete says.

“The majority of requests for information actually go unanswered, which is effectively to refuse them. And there’s been no independent appeal mechanism created in terms of PAIA, so the only way to dispute a denial of access or refusal to give information is to go to the court which is a mechanism that is not available to most South Africans.”

On the 20th anniversary of the Windhoek Declaration – issued by African print journalists in 1991 to assert that a free press is a fundamental human right, and essential to democracy – journalists, bloggers, information campaigners and government officials will be meeting in Cape Town from Sep. 17 to 19 to launch the African Platform on Access to Information.

The conference will advance the idea that governments hold information as custodians of the public good, and everyone has a right to access this information via clearly defined rules.

Dimba has advice for campaigners seeking to go beyond setting out principles and passing legislation. “African access to information (ATI) activists and advocates need to move away from their fixation with adoption of Freedom of Information laws in Africa,” she told IPS.

“African governments will not be open and transparent simply because of adoption of such laws: this is a lesson that we should learn from South Africa.”

She argues that African countries will transform themselves into open societies by adopting effective information practices.

“This means the FOI movement and the open data movement have to start working closely together. Kenya provides an important opportunity on how to use information and communications technology to promote better access to information. Through the M-PESA, Ushahidi platforms and the recently launched Transparency Portal, Kenya is showing the rest of the continent how to exploit ICTs to create opportunities for the exchange, sharing and transferring of information for socio-economic development and all of this has been done without an access to information law in place.”

*Miriam Gathigah in Nairobi contributed to this report.