MBABANE, Aug 5 2011 (IPS) - Many public officials in Swaziland do not think that access to information is a public right, but rather a privilege – which can be withdrawn at anytime. 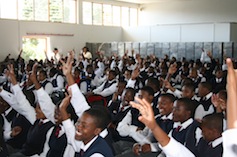 Information is one of the most important tools citizens need to make informed decisions, especially about education. Credit: Mantoe Phakathi/IPS

And while it is difficult for ordinary citizens to get information from public officials, it is almost impossible for children to be taken seriously.

Nothile Dlamini, 16, found this out first hand when she participated in the Right to Know, Right to Education project, whose focus is on budgets, child rights and education and the concept that access to education and information are inextricably linked.

As part of the project Dlamini was one of seven people who had to seek public information from various government institutions in order to assess the response public officials give to different people. The project was carried out by Save the Children-Swaziland in collaboration with the Department of International Development (DfID).

“I realised that for someone to get information in the country it depends a lot on who you are,” said Nothile Dlamini.

She said most government officials, especially at national level, did not even want to hear her out because they only saw her as a child who was wasting their time. Not only did some officials refuse to give her an ear, they were also rude to the point where she nearly broke down and cried.

The study found that only 27 percent of public officials were willing to give out information.

Save the Children legal advisor, Jackson Rodgers, said while it is difficult for many people to access information, it gets worse for children.

This is particularly relevant in a country where 26 percent of the reproductive age group between 15 and 49 years old is infected with the virus that causes AIDS. And where, according to UNICEF, the United Nation’s children’s fund, about 70,000 children have been orphaned from HIV, and the number of child-headed households is high.

“Access to information among children is particularly relevant for child-headed households because these are children who have the responsibility of taking decisions that affect their families,” said Rodgers.

Rodgers said access to information may be granted in accordance with Section 14 of the constitution under the freedom of expression and association clause, but it is not clear whether it is guaranteed.

And the public has no external body to which to appeal if it feels a public official has unfairly refused to share information.

The participants of the study were a trade unionist, a person working for a non-governmental organisation, student Nothile Dlamini, a school committee member, a person living with disabilities, a journalist and a parent.

Launched in September 2010, the study took place over five months and all seven participants had to visit the same public institutions at different times, requiring access to public information.

The exercise revealed the different attitudes civil servants display to members of the public when seeking information.

According to Save the Children monitoring and evaluation officer, Nomfundo Dlamini, participants who produced requests for information on letter heads got better attention compared to their ordinary counterparts like Nothile Dlamini, the person living with a disability and the parent.

“Public institutions claim that they give information to people they can trace and that’s why they would rather deal with organisations and not individuals,” said Nomfundo Dlamini.

However, smaller institutions such as schools are more accessible compared to national public organisations such as the Regional Education Office. In fact, some regional and national institutions refused to accept letters requesting information.

“Getting appointments with relevant officials to (get) reasons for refusals proved to be difficult,” said Nomfundo Dlamini.

Swaziland is among six countries in Africa to take part in the Right to Know, Right to Education project. The other countries are Ghana, Malawi, Kenya, Uganda and Zambia.

According to Save the Children-Swaziland director, Dumisani Mnisi, this project is aimed at promoting the participation of ordinary people, especially women and children, in the education sector.

Information, said Mnisi, is one of the most important tools citizens need to make informed decisions, especially ones that affect the education system of the country. He said the project will help build capacity for ordinary citizens to see how they can have an impact on the education of their children through participating in decision making from schools to national level. With government already rolling out the Free Primary Education Programme since 2009, reasoned Mnisi, ordinary people need to be more informed so they can decide on the kind of education the country needs.

Access to information has also been proven to be an anticorruption tool, said Mnisi. Swaziland scored poorly in the 2011 Corruption Perceptions Index, drawn up by global watchdog Transparency International, ranking 91 out of 178 countries. Minister of Finance Majozi Sithole has repeatedly told the nation that Swaziland loses 11.5 million dollars a month because of corruption.

“Governments do not function well in secret,” said Mnisi.

Getting information is also very difficult even for journalists whose jobs depend on the right to know, said Swazi Observer senior reporter, Fanyana Mabuza, who also participated in the study.

“I realised that there is no policy addressing access to information (from) government,” said Mabuza. “It just depends on the discretion of each public official.”

There is a general fear in the country when it comes to giving out information, said Thembinkosi Dlamini, an economist at the Institute of Democracy in Africa (IDASA).

“What are you going to do with the information?” was the most common question from public officials, said Save the Children’s Nomfundo Dlamini.

Officials were comfortable giving out basic information, such as the number of pupils at school, but were reluctant to cooperate when quizzed on sensitive issues like audited financial statements.

“School principals would refuse to give financial statements saying it is only the principal secretary at the Ministry of Education who can request that information,” said Nomfundo Dlamini.

However, said Nomfundo Dlamini, no legislation or policy prohibits the public from getting school records.

“If you’re dealing with the education sector, you’re told to appeal (to) the Education Ministry, which makes it difficult to get any redress,” said Rogers.

However, said Rogers, the Education Sector Policy, 2011 is a huge step in the right direction in ensuring that schools and institutional information is shared. The policy compels schools to compile information and data and avail it to the public to help guide the education sector at all levels.

“The challenge would be the implementation of the policy because it can only be effective only when followed,” said Rogers.