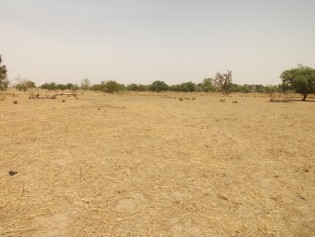 By Brahima Ouédraogo
Despite an abundance of rain, promising good harvests for the current growing season, small-scale farmers and non-governmental organisations are calling for support to smallholders to be maintained with a view to eradicating food insecurity in Africa’s Sahel region.

By Brahima Ouédraogo
For far too many households in Burkina Faso, going to the toilet means heading for the bush. The Burkinabè government has launched a new campaign to change this, calling on prominent personalities as both sponsors and champions.

By Brahima Ouédraogo
Salou Bandé is proud to stand at the front of the only classroom in the village of Bénnogo, 90 kilometres north of the Burkina Faso capital, Ouagadougou, sharing his knowledge with his students. He is part of an initiative to improve education for nomadic children in the West African country.

By Brahima Ouédraogo
Burkina Faso's Network for Access to Essential Medicines (RAME) has called on the Burkinabè government to increase the budget allocation to the health sector to avoid interruptions to AIDS treatment.

By Brahima Ouédraogo
The story of a pair of buffalo aggressively prowling the edges of a village in eastern Burkina Faso is a warning sign of severe water stress in the region which threatens humans and wild animals alike.

By Brahima Ouédraogo
This year Fatimata Koama and her associates received more than half a million CFA francs as a reward for planting - and looking after - 1,200 trees in their small corner of Burkina Faso.

By Brahima Ouédraogo
The conviction of three policemen for the February death of high school student Justin Zongo should be another building block in the struggle against impunity in Burkina Faso, say student leaders and human rights defenders.

By Brahima Ouédraogo
Opposition members of parliament in Burkina Faso have called on France to open its archives to look for evidence of involvement of the French secret services in the 1987 death of Thomas Sankara.

By Brahima Ouédraogo
The Burkina Faso authorities have sounded the alarm over the increased rate of degradation of forests in this Sahelian country.

By Brahima Ouédraogo
The government of Burkina Faso has responded to long-standing demands of farmers for greater support for small family producers with the launch of "Operation 100,000 Ploughs". Smallholder farmers say this will strengthen the country's food security.

By Brahima Ouédraogo
Despite decisively putting down the most recent mutiny by rebellious soldiers, the Burkinabé government is facing questions over its ability to provide a long-term resolution to a crisis that has gripped the country for several months.

By Brahima Ouédraogo
Burkina Faso was one of several countries that where a rapid rise in food prices led to rioting in the streets in 2008. Policy-makers had sensed a crisis developing, but the country was not able to build up sufficient reserves of imported commodities such as rice, wheat and oil to avoid it. There is now an emphasis on achieving food security.
ADVERTISEMENT ADVERTISEMENT