OUAGADOUGOU , Feb 2 2012 (IPS) - The story of a pair of buffalo aggressively prowling the edges of a village in eastern Burkina Faso is a warning sign of severe water stress in the region which threatens humans and wild animals alike. 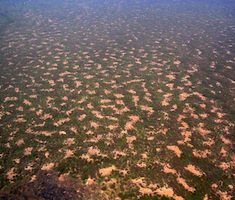 Low rainfall is having disastrous effects on wildlife in W Regional Park, which stretches across Burkina Faso, Benin and Niger. Credit: Nicolas Barbier/Wikicommons

People in nearly half of Burkina Faso’s administrative districts could face food shortages this year, and the the country’s environment ministry has also warned of disastrous consequences for wildlife. Water shortages are likely to cause increased conflict between people and animals, as is already the case in the eastern Bogandé region, where villagers were astonished by the boldness of two desperate buffalo.

“The buffalo wounded a farmer, but then remained near the village of Dorongou,” says Arzouma Tindano, who lives in the region. “We’ve never seen that. But the explanations from the wildlife officials – that the animals’ presence is linked to a lack of water – has calmed everyone.”

Urbain Bélemsobgo is the Director of Wildlife and Hunting in Burkina Faso. “This year, water stress is likely to result in shortages for large mammals who are most dependent on adequate water supplies,” he says.

“Normally, one needs to find permanent water sources within a ten kilometre radius. In a park covering 235,000 hectares (in Burkina alone), presently, you can go 30 or 50 kilometres without finding a single water hole,” says Pierre Kafando, the coordinator of Burkinabè portion of the W Regional Park, a 10,000 square kilometre area that stretches across Burkina Faso, Benin and Niger.

The park – a UNESCO World Heritage Site – is home to between 2,500 and 3,000 elephants, the largest concentration in West Africa, as well as up to 15,000 buffalo; there are also large numbers of roan antelope and big cats including leopards, lions and cheetahs. Some 450 bird species inhabit the transfrontier reserve, and it is also home to the highly endangered African wild dog.

The park’s administration includes wildlife management groups, which bring together people living near the park’s boundaries, the government, and operators with concessions for hunting in designated areas; according to Burkina Faso’s Ministry of the Environment and Sustainable Development, the groups raise awareness of the importance of protecting wildlife among farmers, who also receive financial benefits from the park.

Kafando says the low rainfall is having disastrous effects on wildlife, with many smaller species such as monkeys and oribi and duiker antelope already dying in worrying numbers.

“W Park usually receives 950 millimetres of water each year,” he told IPS. “This season, we have only had 600 or 650 mm. Most of our water holes have dried up and the situation is catastrophic.”

The survival instinct leads elephants to dig in dry stream beds where the water table is near the surface. “But these water holes are also traps for buffalo who get stuck in them,” Kafando says. But elephants and other species are also seeking water and food outside the park.

“We have observed animals ranging outside of their usual territory in the northeast and eastern parts of W Regional Park. These unusual movements of elephants and buffalo are due to the lack of water,” says Bélemsogbo. “And don’t be surprised if behind a herd of buffalo, one finds a lion or a leopard.”

The possibility that large animals are moving outside the park’s boundaries is confirmed by Célestin Zida, the Provincial Director of Environment and Sustainable Development in the eastern province of Tapoa.

“Lions are leaving the park and coming to eat local farmers’ donkeys. There have also been many complaints from locals who have already lost their granaries (to elephants),” says Zida.

Beginning in late 2011, the government has spent around 180,000 dollars creating artificial water points, drilling wells and installing solar-powered pumps to ease the water shortage. Some of the hunting operators have put in similar wells.

“We have to take preventive measures,” says Benjamin Traoré, one of the rights holders in eastern Burkina, who says he has drilled four wells in his site.

An emergency plan, with some 700,000 dollars of support from the World Bank, aims to drill 30 new wells and refurbish others, and to rent tankers with which to replenish existing ponds, according to Bélemsobgo. A broader European Union-backed programme costing 17 million euros will over the next five years establish water points, harmonise management across the park, and support increased tourism, he says.

“We have to do everything possible to protect these animals,” says provincial environment director Zida, “because if we lose them, we will not see some of them ever again.”