OUAGADOUGOU, Sep 27 2011 (IPS) - This year Fatimata Koama and her associates received more than half a million CFA francs as a reward for planting – and looking after – 1,200 trees in their small corner of Burkina Faso. 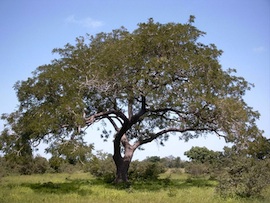 Koama, who lives in the Nayala province of this semi-arid West African country, is the leader of a collective which calls itself “Magoulé”, meaning “I believe” in the local San language.

Magoulé’s payout – equivalent to about 1,200 dollars – is just part of more than 100,000 dollars disbursed over the past two years as a strategy to strengthen reforestation efforts, according to environmental group SOS Sahel and the Burkina Ministry of the Environment.

According to a 2010 study by the environment ministry, 110,500 hectares of forest are degraded each year in Burkina Faso, about four percent percent of the total forested area. According to the study, valuable species like the yellow-flowering kapok, palmyra and locust bean tree are seriously threatened by deforestation.

The programme of incentives is designed to help slow this rapid deforestation; agreeing contracts that provide farmers a modest reward for looking after seedlings they plant has improved the survival rates of young trees to around 70 percent, as compared to just 10 percent in conventional reforestation campaigns.

“If a (newly-planted) tree survives for 24 months, we reward those who planted it,” explains Mouni Conombo, coordinator of SOS Sahel in Nayala. “We don’t pay them for all the work that goes into tending the sapling, but we encourage them, helping them understand how it is better to plant a tree and nurture it.”

The seeds of the locust bean tree (Parkia biglobosa) are fermented to make a tasty, high protein paste, or dried and stored for a year or more without refrigeration, then added to stews to improve their nutritional value.

The leaves of the moringa tree are another source of protein and vitamins, cooked and eaten in much the same way as spinach.

The palmyra palm yields edible kernels, wood for fuel or construction, and its leaves can be used to make brooms, baskets, or fish traps. Species like kapok (Ceiba pentandra) can be used as supplementary fodder for livestock when grazing is poor.

The environmental NGO has been working with this strategy since 2001, using donor support to pay a cash bonus to producers who care for seedlings. Their success led the environment ministry to adopt the approach as a national policy.

According to Salifou Ouédraogo, SOS Sahel’s executive director, the scheme was a response to the failure of classic reforestation programmes, in which as many as nine out of every ten saplings died. “We did some research, and found this method (of paying a bonus) had been used by the colonialists to introduce cocoa and coffee in Côte d’Ivoire,” he told IPS.

“At that time, villagers who were forced to plant the new cash crops would use hot water to secretly kill the cocoa and coffee seedlings. But the colonialists gave chiefs an incentive by giving them rewards such as rifles and cloth (for trees that survived). Cocoa and coffee were then accepted,” says Ouédraogo.

In its contemporary form, the reward has worked out to about a dollar per tree for the Magoulé group this year, but that doesn’t take into account the value of the growing trees.

“It’s been three years since I signed a contract,” says Boureima Dao, from the commune of Ey, in Nayala. “I have 11 hectares and I have earned a bonus of 206,000 CFA (around 438 dollars) for my orchard of fruit trees, which includes guava, papaya and mango trees.”

In Nayala province alone, more than 170 contracts have been signed with local farmers.

“People think that reforestation is very simple, but there are precautions to be taken so that the seedlings we stick in the ground will actually fight desertification,” the director of forests at the environment ministry, Adama Dolkoum, told IPS.

“Among these measures is protection of the saplings – because we are in an area with plenty of livestock. There are also human activities to account for, and there are natural factors which affect the success rate of plantations.”

“After the droughts of 1973-1974,” says Joachim Ouédraogo, director general for conservation at the environment ministry, “there were industrial reforestation efforts across Burkina with machinery and guards… and that worked well to begin with. But there were problems with this approach and with the ownership of these plantations. The strategy of using contracts makes those who plant trees take responsibility for them,” he told IPS.

The new strategy is not one hundred percent effective. “We give the seedlings to associations and they undertake to fulfill the contracts, but for every ten associations who sign up, only five return for the seedlings the following year, because the others have not respected the terms,” said Ouédraogo.

But for those who do, the strategy has transformed attitudes towards planting trees.

“It is different from the traditional programmes of reforestation in which one only provides seedlings,” says Conombo, of SOS Sahel in Nayala. “What we are trying to encourage is a real commitment to planting a tree and caring for it as one would care for a child.”