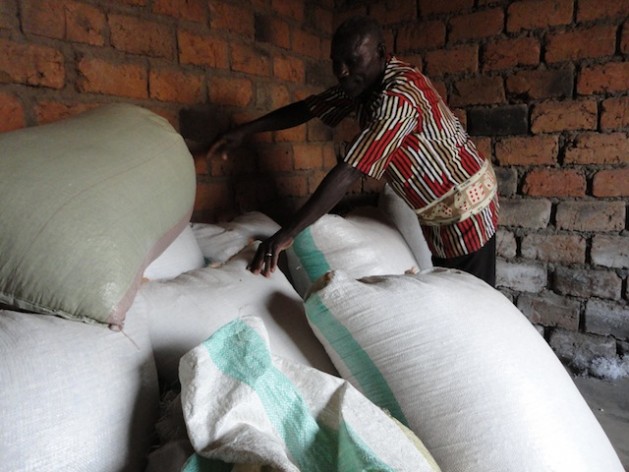 ARUSHA, Tanzania, Sep 27 2012 (IPS) - African leaders should take note of the lessons learned from the Arab Spring and realise that ensuring good governance and food security will avoid crises on the continent, says Kofi Annan, chairman of the Africa Green Revolution Alliance.

The former United Nations Secretary General said that food shortage was one of the triggers of the protests in North African and Middle-Eastern countries that lead to the ousting of Tunisian President Zine El Abidine Ben Ali in January 2011 and Egypt’s President Hosni Mubarak in February that same year.

Annan was speaking at the African Green Revolution Forum (AGRF) being held in Arusha, Tanzania from Sep. 26 to 28. One of the forum outcomes is to develop concrete action plans for growing Africa’s agricultural sector and to promote food security on the continent.

“These are people who wanted to have a real say, on how they are governed, and by whom. They also wanted to play a role in their own political system,

“I think that if African leaders were to pay attention and understand that democratic systems have to work in Africa, we have to accept democratic rotation periodically and listen to the people and the civil society. With this we may avoid crises that we have witnessed in Africa. Remember, it is not just food, it is about food and political systems,” said Annan.

Several hundred delegates – representing African governments, U.N. and donor agencies, and transnational agribusiness companies like Yara and Cargill – have gathered in Arusha, Tanzania, to discuss the transformation of Africa’s agriculture. Even some of Africa’s farmers are present.

Agricultural and economic analysts at the forum told IPS that food security in Africa can be assured only if countries work and trade together without restrictions.

“The East African region has a huge potential for agricultural development. The only enabling environment to ensure that there is food security, is to harmonise policy issues in order to avoid bans on exportation of agricultural goods, and to avoid imposition of unaffordable levies,” Anne Mbaabu, the director for the Market Access Programme at AGRA, told IPS.

“We also need to harmonise grades and standards so that they are the same in all the five countries that form the East African Community (EAC). Yet, this will only succeed after putting in place proper infrastructure in terms of ports, roads and railway lines,” she said. Kofi Annan (r), chairman of the Alliance for a Green Revolution in Africa (AGRA) and former Secretary-General of the United Nations, and Melinda Gates (l), co-chair of the Bill & Melinda Gates Foundation, from their visit to rural cassava farmers and a commercial village dedicated to cassava processing near Arusha, Tanzania.Courtesy: AGRF

“It is important to note that with security concerns, it is not easy for neighbouring countries to trade easily even if your neighbour is in a deep food crisis,” he said referring to the situation in Somalia, which made it difficult for humanitarian organisations to deliver food aid during the recent famine that hit the Horn of Africa region.

However, Chiza noted that there are still bottlenecks that the EAC must deal with before opening borders for uncontrolled import and export markets in the region.

“Political environments in our countries are an existing trade barrier. We need a fair amount of trust. One of the things many people are talking of is nationalisation of land and other agricultural resources in Tanzania. We should make it easy for people to invest in our countries without problems. There is also need for a common currency within the region, and many other complicated issues that must be sorted out within member countries before we finally unite,” he said.

The focus of the forum, said Annan, is to push on past a tipping point in scaling up the transformation of African agriculture.

“In the past, African governments did not focus on agriculture, but today it presents an opportunity to feed, employ and create global food security,” he said, adding that the goal is to support African smallholders’ transition from subsistence farming to running their farms as businesses, producing a surplus for sale.

Africa has the majority of the world’s viable but uncultivated land. And the land that is being farmed is under-utilised. The key to securing the rural livelihoods, strengthening food security, and Africa taking up its proper place in the global food system includes investments in rural infrastructure, expanding the adoption of better seed, fertiliser and techniques by Africa’s farmers, large and small.

“This is what we need,” Annan said. “To make sure farmers are well-organised and given the knowledge and support to play their full part in transformation.”

Gates said her foundation’s agriculture strategy always starts with thinking of farmers’ goals, and how to make investments to support these.

She spoke about the way in which farmers she has met across Africa prioritise things like education and nutrition for their children, carefully assessing their options to try to create a surplus despite the challenges.

“Farmers need to be connected to larger market and not put their produce on market when price is low so that they can earn better incomes,” she said.

In order to ensure farmers are able to take advantage of changes in the countryside, AGRA and others are encouraging small-scale farmers to form collectives and associations to amplify their voices and efforts.

“Agriculture offers us the real opportunity not only to feed ourselves, but also to create employment opportunities for young people and make living in rural areas comfortable,” said Annan.