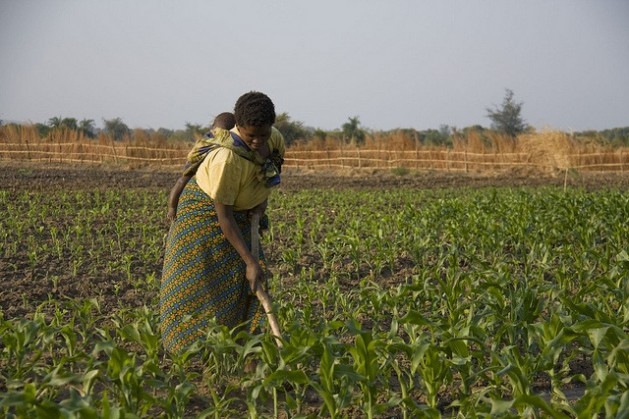 ROME, Sep 21 2012 (IPS) - As the world searches desperately for ways to boost food production by at least 70 percent by 2050 to feed an increasingly hungry planet, many are looking to Africa as the place where a large part of this potential can be realised, mainly for its huge portion of arable land.

Arusha, Tanzania, will soon become the site of a major brainstorming session on this very topic, when it plays host to the African Green Revolution Forum (AGRF) from Sept. 26 to 28, which is aimed at developing African-led food security solutions.

Their goal is to raise 50 million people out of poverty over the next 10 years. AGRF is designed to encourage African leaders’ commitments by promoting ad hoc investments and policy support to increase agricultural productivity and income growth for African farmers – primarily through environmentally sustainable methods and innovative agricultural finance models.

The President of IFAD, Dr. Kanayo F. Nwanze, will address these issues at the Arusha Forum in a panel focusing on how to make African national and regional markets work.

That smallholder farmers hold the key to Africa’s agricultural potential is widely recognised, and activists hope the forum will “explore new ways to provide resources, overcome challenges and improve yields for the millions of farmers who are working less than two hectares of land across the continent”.

According to Carlos Seré, chief development strategist of the International Fund for Agricultural Development (IFAD), increasing agricultural investments is a key factor. “We haven’t invested in agriculture since the green revolution as much as we should have, because it was basically felt that this was something that the market would take care of.”

“Now we realise that we have small stocks. The big stocks, for example of cereals, kept by the government agencies in the past have now been reduced significantly. So when drought in the United States or in Australia, or problems in Russia hit these markets, then prices go up rapidly because there isn’t a big buffer of these stocks like the ones of the past.”

Agricultural investments have a huge direct impact on the lives of smallholders, who manage a large proportion of the land in the developing world.

“IFAD is fully involved in helping governments to do that. Our work is about increasing the supply of food, and helping build the resilience of smallholders and their organisations to become more efficient, using land more efficiently, sharing knowledge, getting better organised, and increasing their production in a more cost effective manner, getting food to the cities and markets without incurring high transaction costs.”

Many of the world’s poorest people spend more than half their income on food, making them vulnerable when food prices rise.

The FAO food price index, which measures monthly price changes for a food basket of cereals, oilseeds, dairy products, meat and sugar, averaged 213 points in August, unchanged from July. Although still high, the FAO index currently stands 25 points below its peak of 238 points in February 2011 and 18 points below its August 2011 level.

According to FAO, the index is reassuring and, although vigilance is needed, current prices “do not justify talk of a world food crisis”.

“This is a very different situation from what we had a couple of years back,” Seré told IPS. “We do realise that this situation has to be monitored carefully, but we clearly don’t see it as being as serious as what we had before.”

Food security experts believe that the international community is now better prepared to deal with global food price shocks than it was in 2007 and 2008. “We have stronger mechanisms for coordination, analysis, and information sharing,” according to Seré.

All these issues should be part of a continuing agenda, which goes beyond specific instances of global price spikes.

What is troubling to some experts is the lack of global awareness of the interconnected outcomes of food insecurity. But when the international price of cereals began to rise to record levels in June this year, following one of the worst droughts ever to hit the U.S. – the world’s largest producer of maize and soybeans – it sent a strong message about an interdependent global food system.

“I think it is vital to make the link between the food crisis at home and what happens in the rest of the world,” Seré said. “People often don’t have a clear understanding of how interconnected these issues are. For example, soybeans for pig feed in Germany come from Brazil, (which is) affected by rain forest clearing there and then there are jobs attached to producing these commodities in (various) different places.”

Only a holistic analysis of the food system can lead to concrete, global solutions.