Water: A Victim of Climate Change 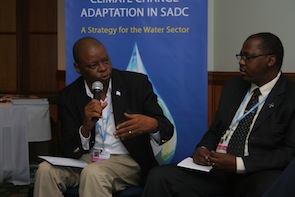 DURBAN, South Africa, Nov 30 2011 (IPS) - The Southern Africa Development Community wants water to be tabled as a standalone item on climate change negotiations – describing it as too important to leave on the periphery.

Water – of which agriculture is the largest consumer – has been identified by scientists as a victim of climate change. Growing populations, pollution and unfair distribution have also added to water stress in southern Africa.

“Adaptation is the main priority,” South Africa’s Minister of Water and Environmental Affairs Edna Molewa told delegates at the launch of the SADC Climate Change Adaptation (CCA) Strategy for Water during the United Nations 17th Conference of the Parties (COP 17) in Durban, South Africa.

“We know that discussions around mitigation are important but we believe we need to do much more work in relation to adaptation so that as a continent and as SADC we can adapt to the impacts of climate change whose daily impacts we are beginning to see,” said Molewa.

Molewa called for comprehensive and integrated actions to tackle the impact of climate change on the precious water resource. Some of the actions include flood management and water use.

The SADC strategy on water is meant to improve climate resilience in the region and will guide member states with negotiations at COP 17 where pressure is on for global leaders to put the brakes on global warming by cutting carbon dioxide emissions.

“We cannot sit back and say we are seeing the impact of climate change but we cannot do something,” said Molewa, adding that, “something has to be done in the talks, COP 18, and COP 19 and … we hope we will not reach COP 28 without a solution. But, in the meantime, we need to adapt.”

The U.N. Convention on Climate Change (UNFCCC) is responsible for the overall framework for intergovernmental efforts to tackle the challenge of climate change. It recognises that the climate system is a shared resource whose stability can be affected by industrial and other emissions of carbon dioxide and greenhouse gases. After 17 years of discussions, carbon emissions are still growing.

Professor Mark New, director of the Africa Climate and Development Initiative at the University of Cape Town, said while water was important and should be highlighted, it must be integrated with other issues.

“I think that the desire to make it water stand alone stems from an important perspective that water is one of the important factors around climate change adaptation. Making it stand alone means that water is separated from many other issues it is linked with,” New told IPS.

“Water is important for energy and agriculture. In Africa, specifically in terms of coping with the changing demographics as we move from a rural society to a more urban society, we have to be thinking in a integrated manner about the way climate change will impact and how decisions we make in one area, around water, will interact with other sectors we are interested in.”

New said the underlying principle of the climate convention is to avoid dangerous climate change and water was therefore implicitly included because the impacts of climate change will affect water along with all other sectors.

Phera Ramoeli, Head of Water Programmes, Infrastructure and Services at the SADC Secretariat told a panel discussion after the launch of the CCA strategy that having water as standalone agenda item for UNFCCC negotiators would raise its profile to attract funding for adaptation.

However, David Lessole, a negotiator for Botswana, differed. He said there is need to see water as a broad issue before putting up as a major agenda items for UNFCC.

“For something to become major agenda it has to benefit me as well,” said Lessole. “As a negotiating partner I must see something in it, for example, in the case of agriculture I can sell you technology, you get more food and become climate resilient and therefore it’s a win-win but for water no, why should I do the job that your government should be doing.”

Lessole argued that there was plenty of water but it was being wasted and was not included in development planning. Hence until such a time that water was seen as broad issue and people were ready to talk about water technologies, they should not be pushing it on the UNFCCC agenda.