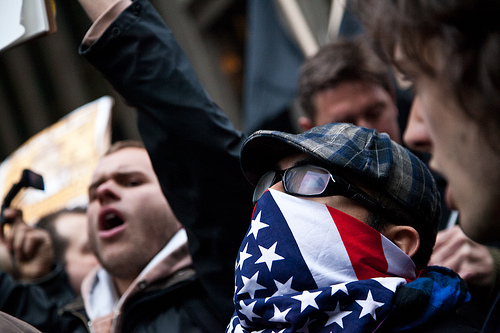 WASHINGTON, Dec 5 2011 (IPS) - It’s not the topic of George Packer’s latest essay that’s particularly surprising. Inequality, he writes, is undermining democracy. Progressives have been hammering home this message for years if not decades.

Nor is the choice of publication necessarily a shocker. Foreign Affairs is the flagship publication of the elite that runs U.S. foreign policy. But it is no longer the exclusively centre-right publication of the Cold War years and publishes the occasional progressive thinker.

No, it’s the prominent placement of the Packer essay that merits attention. It’s the lead article of the November/December issue. And it comes with the bold headline, “Is America Over?”

When Foreign Affairs puts inequality on its cover, the Occupy Wall Street movement has achieved a major victory that eclipses even the generally favourable coverage in liberal bastions such as The New York Times, The New York Review of Books, and The New Yorker. It’s also a sign that a profound anxiety gnaws at the foreign policy elite in this country. The question is: why does Foreign Affairs want its readers to take this issue so seriously?

Packer argues that the U.S. economy went off the rails in the late 1970s, when the top one percent stopped thinking about the national interest and focused instead on the preservation of their own economic and political power. Powerful lobbyists, anti-government politicians on the right, and a newly unregulated Wall Street all combined to boost the wealth of the very rich and leave everyone else behind.

“We can upgrade our iPhones, but we can’t fix our roads and bridges,” Packer writes to illustrate our economic predicament. “We invented broadband, but we can’t extend it to 35 percent of the public. We can get 300 television channels on the iPad, but in the past decade 20 newspapers closed down all their foreign bureaus.”

In other words, the public realm has deteriorated over the last two decades even as the private realm continues to promise cutting edge speed and novelty. Worse, it’s a self-reinforcing dynamic, with the wealthy accumulating more political influence that helps them remain on top.

This all makes sense to me. What’s not so clear to me is why Foreign Affairs has decided to highlight this message. The November/December issue features a Shell ad on the inside front cover and a Goldman Sachs ad on the back cover: these are not exactly OWS boosters. The Council on Foreign Relations, which publishes Foreign Affairs, has long had a cozy relationship with Wall Street and such figures as David Rockefeller and Peter Peterson. It seems as though Foreign Affairs is biting the hand that feeds it.

Here are three possible reasons for the sudden interest in inequality.

Many of the young people spearheading the OWS movement have followed the rules, gone to college, racked up lots of students loans, and still can’t get decent jobs.

In the early 1970s, Adam Davidson writes in The New York Times Magazine, “less than 11 percent of the adult population graduated from college, and most of them could get a decent job. Today nearly a third have college degrees, and a higher percentage of them graduated from non-elite schools.”

And the jobs are simply not there. The OWS message resonates in mainstream society – and publications such as Foreign Affairs – because middle-class parents have become acutely concerned about their children’s future.

Sure, inequality has adversely affected working-class America and African Americans for a long time. But the elite pricks up its ears when college-educated white kids, saddled with debt and dependency, become the functional equivalent of Third World countries.

Free-market advocates have traditionally had a quick answer to the complaint that the United States is no longer competitive globally. Even with so many manufacturing jobs sucked overseas, they argue, the United States remains a leading center for innovation: iPhones, gene sequencing, dodgy financial instruments.

Even if our health care system is so obviously broken, our high-end care remains the best in the world, and the global elite continue to flock to our hospitals for the most sophisticated treatments.

Yet the plain truth is that by all objective standards, the United States is falling behind. In the World Economic Forum’s latest Global Competitiveness Index, the United States slipped for a third year in a row to fifth place. The top positions continue to go to European countries: Switzerland, Finland, Sweden.

In The Atlantic, urban studies theorist Richard Florida underscores the negative relationship between inequality and competitiveness to emphasize that creativity can go hand in hand with equity. We can have our cake and distribute it fairly too.

The Arab Spring followed the classic revolutionary pattern of a rising economic class thwarted in its ambitions by sclerotic states in Tunisia, Egypt, and Libya. When the aftershocks of the Arab Spring hit the OECD club of economically advanced countries, the focus shifted to inequality.

This summer, for example, Israel experienced the largest protests in its history. Before the tents appeared in Zuccotti Park in New York City, they appeared on the streets of Tel Aviv under the slogan “We want a welfare state.”

Israel’s “economic miracle”, created largely by a high-tech boom, had benefitted only a small segment of the population. Israel ranks the fifth highest in the OECD in terms of inequality and has the highest poverty rate to boot. Even in countries touted for their ability to surf the new wave of innovation, the middle class was losing out.

According to the OECD, inequality has increased rather dramatically among the most economically advanced countries of the world. It’s one thing for inequality to undermine democracy, something that foreign policy mandarins have never worried about too terribly much. But when inequality undermines stability and the overall investment climate, the Foreign Affairs crowd starts to fidget.

So, it seems, the foreign policy mandarins are slowly realising that their Bush-era hangover has not one but two major symptoms. The military invasions and violations of international law continue to cause enormous headaches. And the deregulatory fervor and tax cuts for the wealthy are causing major stomach distress.

The race for profit and the embrace of greed is all fine and good up to a point for these folks. But when it approaches the danger point, a correction is necessary. The decision to publish and promote Packer’s essay is comparable to parents showing up in the wee hours of a loud party and ordering the kids to turn down the music before the neighbours call the cops.

Ronald Reagan used to say rather fatuously that Democrats had gone so far left they’d left the country. Now the foreign policy elite is realising that the Republicans have gone so far right, they’ve gone right off the rails.

The Republican Party has been so extreme in its defence of the one percent – actually the 0.1 percent out – that it has effectively seceded from the country to create a confederacy of cupidity. This confederacy is as single-minded in its pursuit of power and privilege as the North Korean nomenklatura.

However closely connected to Wall Street they might be, the bigwigs at Foreign Affairs realise that this is not a confederacy to which they want to pledge allegiance.

*John Feffer is co-director of Foreign Policy In Focus at the Institute for Policy Studies in Washington, DC.