GERMANY: While Some Waste, Others Feast

HAMBURG, Jan 20 2012 (IPS) - Shortly before midnight last Saturday, Alexander, a 24-year-old law student, stepped out of his small apartment in Hamburg and set off for a jaunt around the local supermarkets to pilfer their garbage containers. 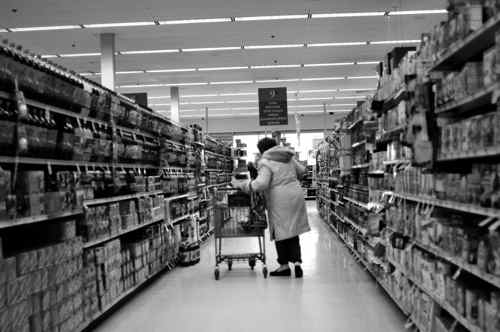 Alex, who did not want his family name to appear in the newspapers, dines almost exclusively on the food that other Germans – from individual families to grocery stores, restaurants and supermarkets – throw away.

“Of course I do this because I (get to) eat for free,” Alex told IPS. “But I also do it out of a deep conviction that throwing away food other people can eat is irresponsible and immoral.”

According to a 2011 study by the Food and Agricultural Organisation (FAO), the average German citizens throws away roughly 105 kilogrammes of edible food each year.

While this phenomenon of waste arises partly from concerns over the aesthetics of food, many experts have linked the rampant dumping of edibles to consumers’ misunderstanding of the expiration data printed on food packages and bottles.

For instance, supermarkets and grocery stores ‘sort out’ potatoes that are too large, cucumbers that are “too bent” and cheese and yoghurt supposedly about to expire for dumping.

“Ever more people expect food in large assortments and of the best quality,” said Claus Herda, director of Hamburger Tafel (“Hamburg’s Table”), a humanitarian organisation that collects food for the poorest inhabitants of this affluent German city, located some 300 kilometres west of Berlin.

“If one supermarket does not provide such quality and variety, consumers go elsewhere to buy their groceries,” Herda added.

He told IPS that practically every German consumer misinterprets the so-called “best before date” printed on all food containers as a warning instead of a suggestion.

This behaviour forces the stores’ management to eliminate foodstuffs considered ‘unattractive’, even if they are still edible. As a result, thousands of tonnes of apples, bananas, milk, coffee, yoghurt, sugar and cheese rot in enourmous garbage containers all over the country.

Alex calls this throw-away mentality “outright insanity. I no longer pay for food. When I see what other people throw away, I realise the craziness of our affluent society.”

Twenty-eight-year-old Berlin resident Raphael Fellmer also benefits from the wasteful behaviour of his society. He and his companion Nieves, along with their four-month old daughter Alma Lucia, eat only ‘sorted out’ food.

“We only eat organic food thrown away by specialised stores,” Fellmer told IPS. “We do not spend a cent on food.”

Three to four times a week, mostly around midnight, Fellmer tours the nearby supermarkets. His equipment consists of nothing more than a head-lamp, a pair of gloves, a big rucksack and a bicycle.

“I usually collect more food than my family can actually eat,” he told IPS. “You just open the container and a mountain of edible food emerges in front of you.”

During the interview, Fellmer brewed a mug of organic coffee from Nicaragua. “I just got it from the store across the street,” he said. “It is even marked ‘fair trade’.”

“The sugar, also organic, comes from Madagascar,” he added.

Fellmer commented that such details illustrate “the sanctimony of many self-proclaimed (ethical) consumers in this rich society. You simply do not transport organic coffee and sugar across the world to throw it away here only because the ‘best before’ date suggests that the goods may be too old to be consumed,” Fellmer stressed.

The act of collecting thrown away food has become so widespread that people like Alex and Raphael have even coined a new verb – containern, meaning “looting food containers” – and have created Internet networks to spread the news about the best locations from which to collect dumped groceries.

In response to what the food retail industry has dubbed ‘looting’, supermarkets and grocery stores are now locking up their garbage containers. Many companies have even hired security personnel to keep away the looters.

Other food producers have found more creative ways to recycle food and avoid throwing it away. In the Western city of Duesseldorf, a bakery chain used to toss up to 12 tons of bread every month.

“I was deeply unhappy with this waste,” Roland Schueren, owner of the bakery chain, told IPS. “Now, we burn the old bread as (fuel) for our backing ovens. If all bakeries in the country did the same, Germany would save enormous amounts of energy and could spare one or two nuclear power plants.”

So far, this enormous waste of edible food has not led to substantial political change. The ministry for consumer protection announced in late 2011 that a new study would be carried out this year “to exactly quantify the dimensions of the problem,” according to one spokesperson.

The spokesperson also praised the policy of “best before date” labelling as “a great political accomplishment, since it (alerts) the consumer to the precise freshness of the foodstuff.”

However, the spokesperson admitted that the misinterpretation of the data “has led to waste. We will revise this.”

Germany’s wasteful behaviour is not unique in the industrialised world. According to the FAO study quoted above, roughly one third of the food produced in the world for human consumption every year gets lost or wasted.

The study suggested that the supermarkets’ tactic of encouraging consumers to buy more than they need is a huge factor leading to the mountains of waste that accumulate outside food retail stores, especially the so-called “buy three, pay two” marketing policy.

The study also suggests that consumers in countries such as Germany be taught that throwing food away “needlessly is unacceptable”, and be made aware that “given the limited availability of natural resources it is more effective to reduce food losses than increase food production in order to feed a growing world population.”