GUATEMALA CITY, Jan 2 2012 (IPS) - “There’s a big difference in the way indigenous people and mestizos (people of mixed ancestry) are treated. We are not paid the same wages for the same work,” Higinio Pu, an activist with the native group Waxaquib Noj, which means “wisdom” in the Maya Quiché language, told IPS. 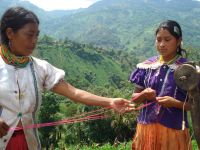 “When workers are hired we are also passed over. And indigenous women who work in the ‘maquilas’ (plants assembling goods for export) are hit especially hard by discrimination,” said Pu.

These views were corroborated by a survey on “Racismo y discriminación racial en el sector empresarial” (Racism and racial discrimination in the business sector), carried out in November by the Association for Research and Social Studies (ASIES), an NGO, and the Presidential Commission on Discrimination and Racism Against Indigenous Peoples in Guatemala (CODISRA).

Based on telephone interviews with 550 business owners in greater Guatemala City, the survey found that on average, only 12 percent of workers in small and micro-enterprises are indigenous people, while the workforce of medium and large businesses is made up of 20 percent native people.

According to official statistics, indigenous people comprise close to 40 percent of Guatemala’s population of 14 million, but native organisations put the figure at over 60 percent.

Over half the business owners interviewed (52 percent) said they do not pay mestizos and indigenous people the same wages for the same work, and in some service sectors like retail the proportion of those admitting that they paid different wages was as high as 56 percent.

Pu agreed with the survey findings, but had considerably more to add.

“The survey did not collect information about the working conditions endured by indigenous people, which are often inhumane. During the coffee or sugarcane harvests, for example, the workers live in rough shacks or sheds and sleep all packed together on the floor,” he said.

Bequer Chocooj, the CODISRA commissioner, told IPS the survey “is an initial approximation” to assessing employer discrimination against indigenous people, and has produced “very valuable” results.

“The fact that 52 percent of business owners responded that there is a difference between the wages paid to indigenous persons and to mestizos for the same work confirms the 2010 National Employment Survey results, according to which indigenous workers earn 50 percent less than non-indigenous employees,” he said.

He also pointed out that the participation of indigenous employees in the Guatemalan business sector is “very low.”

“Although 83 percent of the business owners surveyed said they have no preference between hiring indigenous or non-indigenous workers, the results show otherwise, because only between 12 and 20 percent of their employees are indigenous,” he said.

The consequences of this sort of labour discrimination for the Guatemalan economy are enormous, according to Chocooj.

“The economic cost to the country of ethno-racial discrimination in 2003 was over 6.3 billion quetzals (about 812 million dollars), equivalent to 3.3 percent of GDP” according to the 2009 study “Diagnóstico del Racismo en Guatemala” (Analysis of Racism in Guatemala) carried out by the Vice Presidency of the Republic, he said.

“Without equality, we cannot develop. There is a historical debt owed to indigenous peoples that has to be redressed, by improving our access to political power and increasing public investment in health, education, basic services and productive projects,” said Chocooj.

The 2010 National Survey of Employment and Income carried out by the state National Institute of Statistics published data about the different level of participation in the economy of the indigenous compared to the non-indigenous population of Guatemala.

There are 3.4 million non-indigenous people in the labour force, compared with only 2.2 million indigenous people. And 44 percent of the country’s underemployed people are indigenous, according to the 2010 survey.

Half the Guatemalan population lives below the poverty line, while 17 percent are extremely poor, most of them indigenous people, according to international bodies.

Chocooj is hopeful that the incoming government of president-elect Otto Pérez Molina, a retired general due to take office in January for four years, will create more opportunities for the development of indigenous communities.

This would require enlarging the budget of government institutions like the Ombudsman’s Office for Indigenous Women, the Guatemalan Fund for Indigenous Development, and the CODISRA commission Chocooj presides, he said.

Ruben Narciso of ASIES, the social research association, told IPS that the survey they carried out with CODISRA clearly demonstrated that there is ethnic discrimination in the country when it comes to hiring workers.

“The goal of the survey on racism among business owners was to gather primary information as a basis for further studies on indigenous issues in relation to companies, and create public policies to counteract discrimination,” he said.

That is why they will shortly be holding meetings with private sector organisations to present the results of the survey and initiate discussions with a view to improving equality in the Guatemalan labour sector.