BASRA, Jan 29 2012 (IPS) - “I’d say there are around 5,000 of us in the country, but if you ask me next week we may well be under 3,000. After twenty centuries of history in Mesopotamia, we Mandaeans, are about to vanish.” Anxiety about the future of his people is more than evident in the figures given by Saad Atiah Majid, chairman of Basra’s Mandaean Council. 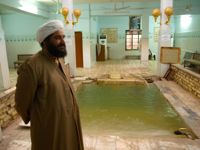 Dubbed “the Christians of St. John” by the Portuguese who arrived in Basra in the 17th century, Mandaeans follow the teachings of John the Baptist. Baptism – their central ritual – has been held on the banks of the Tigris and Euphrates for almost two millennia.

“It’s true that we had our share of pain and misery during Saddam’s times but then our people would leave the country mainly due to economic reasons. By contrast, after 2003, following the brutal harassment by radical Islamists, Mandaeans began to flee en masse to Kurdistan, Syria, Europe,” says Majid.

Behind him, a tiny white cloth and an olive branch hang from a wooden cross. They call it drabsa – it’s the closest thing to a flag Mandaeans have. At the centre where this community gathers in Iraq’s southern oil hub, walls are covered with pictures of bearded men dressed in white robes, celebrating collective baptisms in the river.

According to a report by Human Rights Watch released in February 2011, 90 percent of Mandaeans have either died or left the country since the invasion by the U.S.-led forces in 2003. Mandaeans have repeatedly called for evacuation of their entire people.

The head of the cult, Sheikh Sattar Jabbar al-Hulu, is now based in Australia. For the time being, Mazin Rahim Naif still remains in his native Basra. This young man in his late twenties is the local spiritual leader.

“Until 1991 we would conduct our ritual in the river, but the dire security situation and pollution have forced us to improvise our worship in these small pools inside our temples,” Rahim tells IPS. The priest adds that the local council has repeatedly denied them access to an area by the river, a refusal particularly painful ahead of an imminent and important religious event.

“On March 17, for five days, we celebrate each year the ‘Pronaya’ to recreate the making of the world of light. Do you think this is an appropriate place for it?”

Later, the young priest hands us the ‘Treasure of God’, the sacred book of this community written in the Mandaean-Aramaic language.

“We translated it into Arabic because there were rumours among Muslims that it incited to apostasy,” recalls Rahim. “We wanted to show everybody that we also believe in one god, that we pray and that we also practise zakat (charity).”

But the effort does not seem enough to avoid increasing discrimination.

“With his student record, my son should be eligible for a good position as an engineer in the local petrochemical industry, but he has been unemployed since he graduated three years ago,” complains Tahseen, a local Mandaean. “The best jobs are given to those families who lost a member in the war against Iran, or during Saddam’s repression. The privileges are for those who have ‘martyrs’. Ours do not count according to their standards.”

The five-hour drive from Basra to Baghdad goes upriver with the Tigris and Euphrates. It’s a road often overloaded with oil trucks and cars with coffins strapped to their roof racks. These are bound for Najaf, the place where every Shia Muslim dreams of being buried.

Once in the capital, the checkpoints multiply as we approach the main centre of the Mandaeans in Qadisiyah neighbourhood on the western bank of the Tigris. Surrounded by concrete walls, the headquarters are protected by soldiers from the Ministry of Interior. Inside we meet Toma Zekhi, the local Mandaean head.

“It is not only religious persecution,” he explains. Traditionally, the Mandaeans have been goldsmiths and silversmiths, and this, during the last few years, has become a nightmare given the levels of criminality. An Amnesty International report of April 2010 corroborates Zekhi’s words, describing the dangers inflicted on Mandaean jewellers in post-Saddam Iraq.

Zekhi chose to stay, but many of his fellow believers fled after receiving ‘convert or die’ letters, also recurrent among the decimated local Christian population. Although attacks have decreased in the last three years, the road to harmony and coexistence among the peoples of Iraq is still full of obstacles.

“Religion and ethnicity go hand in hand Iraq and, unfortunately, that is also reflected in the Constitution,” says Saad Salloum, university professor and editor of Masarat, the only magazine on the minorities issue in Iraq, from his office in Baghdad.

“The Mandaeans are often included in the sub-group of ‘Christians and other ethnic groups’, so they lack certain privileges such as quotas of representation in Parliament and local councils.”

Not far away from there, Hassam Sapty Zaroon runs a small shop in Karrada neighbourhood southeast of Baghdad. He is carefully engraving a silver medallion with a bee, a lion, a scorpion and a snake around them. It is the amulet which, in Mandaean tradition, protects against evil.

During a break, Zaroon proudly produces a yellowed old document – a thank you letter addressed to his grandfather and signed by Winston Churchill to acknowledge the present of a cigar box engraved in silver with the profile of the British prime minister.

“Ours is a family tradition that goes back 400 years. We are all goldsmiths and silversmiths,” says Zaroon, the last of an illustrious line of craftsmen.

The artisan is using exactly the same tools as his grandfather, but Hassam Sapty stopped looking wistfully at the Tigris since he converted to Islam several years ago.

Even if urgent measures are enforced, his traditional Mandaean motifs engraved in black silver might soon be among the last vestiges left of an ancient culture about to wither away forever.