WASHINGTON, Jan 4 2012 (IPS) - The recent escalation in Iranian threats to blockade oil shipments and attack U.S. Navy vessels are meant to push up the price of oil and divert domestic opinion from an economic crisis but are not likely to lead to a war in the Persian Gulf, in the view of Iran experts. 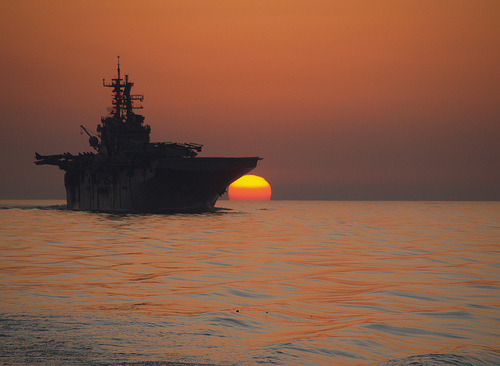 Should Iran retaliate for impending new sanctions against its oil exports, it is more apt to target oil production in its neighbour, Iraq, than foreign tankers in the Gulf.

“We’ve seen this movie before,” Cliff Kupchan, an Iran analyst at the Eurasia Group, told IPS on Wednesday, referring to Iran’s defiant rhetoric and firm U.S. response. “Neither side wants a war. A lot of this rhetoric is overstated.”

While there is always a chance for miscalculation in the crowded waters of the Gulf, a clash of words is more useful to Tehran than actual hostilities.

On Tuesday, after Iranian armed forces commander Gen. Ataollah Salehi warned that a U.S. aircraft carrier that left the Gulf last week should not return, the price of oil jumped four percent.

Despite threats last week to close the Strait of Hormuz, the choke point between Iran and Oman for much of the world’s tanker-borne oil, Iran is not in a position to keep the waterway closed.

During the 1980-88 Iran-Iraq war, Iran used mines and small boats to attack 190 ships from 31 nations, killing at least 63 sailors, according to David Crist, who wrote a history of naval encounters in the Gulf for The Washington Institute for Near East Policy in 2009. However, the U.S. and allied navies kept the Gulf open for tanker traffic and Iran suffered significant losses, including three warships, two oil platforms and a number of boats.

The U.S. is now much better equipped to deal with the threat from Iranian mines, Crist wrote, with four counter-mine ships based in Bahrain and superior surveillance.

Should Iran provoke a clash, Iran hawks in the U.S. have suggested that the U.S. military take the opportunity not just to hit Iranian naval assets, but to go after its nuclear installations as well. While the Barack Obama administration has given no indication that it would do so, Kupchan said Iran would be unlikely to jeopardise its “crown jewels”.

Iran would presumably seek to continue its own oil exports through the Gulf and target the ships of Arab countries such as Saudi Arabia and Kuwait. However, that would undermine Iran’s relations with China, a major importer of oil from Saudi Arabia as well as Iran. China is also Iran’s number one trading partner and has provided Iran with key political support, threatening to use its veto power to prevent new sanctions against Iran by the U.N. Security Council.

While the United States has repeatedly affirmed that it will keep the Gulf open to shipping, the Obama administration is not eager for a new conflict in the Middle East at a time when it is trying to cut the defence budget and the president is running for re-election.

However, the administration has not sought to take advantage of the growing squeeze on Iran to advance a diplomatic solution of the dispute over Iran’s nuclear programme.

Iranian press reports say that Tehran is seeking a new round of nuclear negotiations with the U.S. and the other permanent members of the U.N. Security Council plus Germany this month. However, State Department spokeswoman Victoria Nuland said Tuesday that Iran had yet to put the request in writing.

U.S. officials have barely mentioned diplomacy as an option with Iran in recent months following a brief attempt at engagement in Obama’s first year. Instead the focus is almost entirely on sanctions.

Nuland told reporters Tuesday that the Obama administration sees new “threats from Tehran as just increasing evidence that the international pressure is beginning to bite there, and that they are feeling increasingly isolated and they are trying to divert the attention of their own public from the difficulties inside Iran, including the economic difficulties as a result of the sanctions.”

The Iranian warnings have coincided with a precipitous drop in the Iranian currency, the rial. Worth 10,000 to the dollar a year ago, the rial is now hovering between 16,000 and 18,000.

Djavad Salehi-Isfahani, an expert on the Iranian economy at Virginia Tech, told IPS that the biggest victim of the drop was the Iranian middle class. He said that at one point on Monday, “there were no dollars to be bought” from currency traders in Tehran.

While the Iranian government still has substantial reserves in gold and hard currency, Salehi said there is a severe shortage of paper dollars in the country exacerbated by the growing difficulty of carrying out foreign banking transactions. Small factory owners desperate to keep their enterprises running and dependent on imports of intermediate goods are bidding up the price of the dollar in a panicky fashion, he said.

Others impacted by the currency drop include the parents of students studying abroad.

“There are half a million kids abroad,” he said. “They need dollars to pay tuition and rent.”

The crisis comes at a politically sensitive time for the Iranian regime. Parliamentary elections are scheduled for Mar. 2 and the government fears that a low turnout will further undermine its legitimacy, already blackened in the wake of disputed 2009 presidential elections and a harsh crackdown on dissent.

The rial plunge appeared to be in part a reaction to an anticipated European embargo on Iranian oil. European Union members decided in principle Wednesday to halt imports that have averaged about 450,000 barrels a day.

The Europeans, who are expected to finalise the decision by the end of this month, are responding to a new U.S. law, signed by President Barack Obama on New Year’s Eve, that forbids foreign banks that deal with Iran’s Central Bank from transactions with U.S. banks. The law, which was attached to a defense authorisation bill, provides several months for the sanctions to go into effect and allows Obama to waive the penalties if they will result in major disruptions in the world oil market.

Kupchan suggested that Iran might retaliate by sabotaging Iraqi oil production, taking advantage of chaos in that country since a U.S. military withdrawal and seeking to trigger the market disruption outlined in the new U.S. sanctions bill.

“If you want to undermine the legislation, the easiest oil to take off line is Iraq,” he said.