TEHRAN, Feb 7 2012 (IPS) - It’s miserable this time of year in Tehran. The short days are darkened further by the annual submersion of the city under a thick layer of exhaust and smoke. With the surrounding mountains and weak wind and winter sun, the pollution hovers for days, prompting the government to issue regular warnings to the elderly, pregnant and those with heart conditions not to go outside. 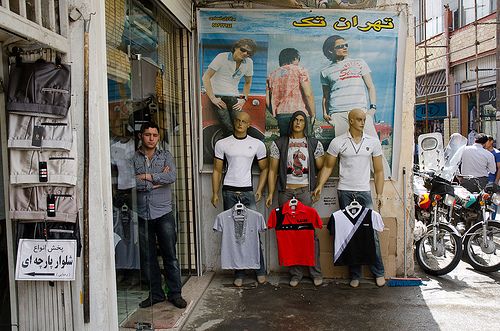 Domestic production has nearly disappeared and imports are getting tougher to come by. Credit: Kamshots/CC By 2.0

But their declining health is not what is on the minds of most Tehran residents today. Rather it’s their deteriorating standard of living and the unshakable feeling that the world is conspiring against them which has Iranians most vexed.

With the double threat of a military attack by the U.S. or Israel or both, and the increasing instability of the Iranian economy as witnessed last month in the currency crisis that continues to grip the capital, the feeling of hope that once pumped through the city in the days before the 2009 election, and arguably even in the weeks that followed, is nowhere to be found.

The reality is that the situation is not that bad, yet. Most signs point to a financial well-being at its lowest levels for average citizens than at any point since Iran’s eight-year war with Iraq, when shortages were the norm.

While Iranians have complained about their lot for years, statistics simply have not matched up with the population’s level of economic discontent. Heavily subsidised fuel and utilities, access to basic necessities and a decent education never seemed to register for a population who wanted to have their cake and eat it, too.

Until last year, Tehran consistently ranked as one of the cheapest major cities in the world for its residents.

Some of these things are still available, albeit in rapidly diminishing fashion, and for the first time it seems there is a growing awareness that things could become drastically worse in short order.

The currency crisis is the most recent sign of what may lie ahead and one that poignantly affects the lives of millions of Iranians, as this has become a conspicuously consumptive society that can’t keep up with its own demands. Domestic production has nearly disappeared and imports are getting tougher to come by, with ever tightening trade sanctions placed on Iran by Western powers by the day.

This is affecting all aspects of daily life.

According to young mothers, “Pampers”, as all foreign diapers in this brand-conscious society have come to be known, are becoming nearly impossible to find, and when they are available the cost is a prohibitive one dollar per diaper.

For a society where the average monthly income hovers around 500 dollars this is very steep, but as 26-year-old Samaneh explained, “The domestically produced diapers give my baby a rash that is even more expensive to treat than buying Pampers.”

Near a major local hospital in the Tavanir neighbourhood of Tehran, the walls of apartment buildings are plastered with a photocopied message: “URGENT: due to desperate financial situation I am selling one of my kidneys. Type 0+ blood. Please call.”

The private sale of organs in Iran has long been legal, and the health ministry touts the fact that there is no waiting list for kidney transplants inside the Islamic Republic, but currently the supply seems much greater than the demand.

Still, there are some in Tehran doing extremely well. In the northern part of the city, long considered to be the Westernised quarter of money and liberalism, many residents seem to be doing better than ever.

These people have often mistakenly been identified as the primary engine of domestic opposition to the regime, but with the influx of luxury cars and expensive bags bloating the area, there is clearly a segment of the society that is thriving in the current environment of currency and land speculation. While they may not be ardent supporters of the regime, they have remained quietly complicit as long as their interests are intact.

Not too far away, in most of the major squares of northern and central Tehran, the morality police emerge daily, with their chador- covered female officers and green and white vans, waiting patiently to pick up hejab (Islamic dress code) offenders seemingly at random. While the arrests have decreased in recent years and the punishments are less severe, average citizens are more disdainful than ever about the stifling rules.

“As if we don’t have enough problems already,” says 28-year-old office worker Taraneh, who was arrested recently along with a mother and her five-year-old daughter for wearing jackets deemed too short.

“I think they just send these people out to keep them employed,” said 35-year-old Hassan, as he watched the arrests. “What they don’t realise though, is that everyone that sees this harassment, religious or not, simply curses the system.”

Indeed, even President Mahmoud Ahmadinejad has said it’s not the government’s business to police what Iranians wear. Apparently, though, there are some in positions of power who still consider this an issue of national security.

Some residents are starting to see little distinction between these defenders of the system and those driving Porsches that cost over 300,000 dollars in northern Tehran.

“They all represent the hypocrisy that we’ve lived with for centuries,” says history teacher Nima. “Unfortunately, this is a part of this 2,500-year-old culture we’re all so proud of.”

That pride, though, is eroding for many, and everywhere one goes in the capital, plans to escape the current situation can be overheard at all levels of society. With an epic brain drain that sees 50,000 to 80,000 citizens leave each year, there are plenty of success stories for young Iranians to try and emulate.

Actually going, though, is getting increasingly difficult. It is not that the Islamic Republic is holding them back, but an Iranian passport seems to be one of the least valued on earth. Even tourist visas are hard to come by, as many Western countries worry that Iranians will simply stay in their countries if they are granted short-term entry.

The ever tightening sanctions that the United States continues to implement, as well as the EU’s looming embargo on Iranian oil, are further reminder for Iranians that their friends are few in the world.

Says small business owner Majid, “I never had a bad thing to say about (U.S. President Barack) Obama until he signed that bill (on Dec. 31.) Now I’m really angry with him. Lots of people feel the same here.”

Another sign that U.S. attempts to win over Iranian hearts and minds are failing.

“Sanctions will not have any impact on our nuclear course and they (the West) will not achieve their aims,” Foreign Ministry spokesman Ramin Mehmanparast said in his weekly press conference on Tuesday, adding, “Our history has shown that sanctions, which are totally illogical, have accelerated our nation’s progress.”