Can the Maid Have Boyfriends?

SINGAPORE, Mar 20 2012 (IPS) - A routine announcement by the government of this city-state entitling foreign, female domestic workers to a day off each week has sent their affluent employers into a tizzy. 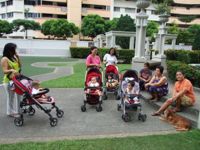 Filipina maids catch a moment together while taking their employers' children and the dogs out. Credit: Kalinga Seneviratne/IPS.

What if the hired help finds a boyfriend and gets pregnant? That was the thought uppermost in the minds of Singaporeans, a third of whom are used to the idea of young women from impoverished Asian countries cleaning, fetching and caring for them, unquestioningly.

“I had a Filipina maid who found a Bangladeshi boyfriend and got pregnant. I had to send her back home after just seven months and pay for her airfare,” complains Elsie Wong, a businesswoman. “I almost lost my 4,000 dollar bond,” Wong told IPS.

Singapore’s foreign domestic worker (FDW) contracts stipulate that once the hired help gets pregnant she must be deported, with the employer paying her airfare.

Wong was spared having to forfeit the security bond since the ministry of manpower (MOM) has clarified that since January 2010 the employer’s liability has been limited.

“The ministry does not forfeit employer’s security bonds if FDWs violate their own work permit conditions, for instance, if they moonlight or get pregnant,” said Farah Abdul Rahim, director of corporate relations at the MOM, in a letter to the Straits Times, responding to employers’ concerns.

“If you allow your teenage children to have boyfriends or girlfriends, how can you demand that an adult in your employ should not?” argues John Gee, former president of ‘TWC2’, a voluntary agency that has campaigned since 2003 for a weekly day off for FDWs.

“This is totally unacceptable and this is an attitude that has to change,” says Gee. Starting Jan. 1, 2013 Singaporean employers will either conform to the new law or be liable to pay a fine of 4,000 dollars or spend six months in jail.

“Maids are human beings too. They need a day off like other workers,” says Papias Banados, who has worked in Singapore for over 10 years as a FDW and recently wrote a book of short stories on OFW (Overseas Filipino Worker) experience titled ‘The Path of Remittance’.

“There are many OFWs working here in restaurants, offices and as sales assistants and they get a day off. They have boyfriends and parties. So, why should a maid be treated differently?”

Employers and recruitment agents also argue that giving a weekly day off will inconvenience families with small children, invalids or elders.

Singapore, ranked third in Forbes annual richest country list released last month, has a per capita income of nearly 56,700 dollars and employs some 206,000 FDWs in a population of four million.

Most of these women come from impoverished families in the Philippines, Indonesia, Sri Lanka, Myanmar (or Burma) and Cambodia. They often work seven days a week and between 10 to 16 hours a day, earning between 250 to 400 dollars a month.

Social workers and rights groups have campaigned for over 10 years to get the Singapore government to legislate for a compulsory day off per week for these domestic workers.

Singapore is among a handful of Asian countries that do not have law providing a day off for domestic workers and these include Malaysia, Thailand, South Korea and Saudi Arabia.

Bridget Tan, president of the Humanitarian Organisation for Migration Economics (HOME), notes that Singapore is now a step closer towards full recognition of domestic workers’ rights on par with other foreign workers.

“The lack of adequate protection has made live-in domestic work a highly stressful occupation and many women in such situations find it difficult to cope with the social isolation and demands of the job,” she argues.

She pointed to the case of an underage Indonesian maid, Vitria Depsi Wahyuno, murdering her elderly employer because she was unable to cope with the latter’s demands and verbal abuse. Wahyuno was sentenced to ten years in jail for the crime on Mar. 7.

“The mandatory day off decision is significant,” says Moe Thuzar, lead researcher at the ASEAN Studies Centre at the National University of Singapore. “It recognises the importance of the domestic worker’s physical, mental and emotional well-being.”

But, Tan warns, the role of recruitment agents needs more scrutiny, especially because the new law allows employers to pay the equivalent of a day’s wage in lieu of a day off, which would come to about 15 dollars.

“The bargaining power of a migrant worker is weak because many of them are indebted to the recruitment agents from the moment they arrive in Singapore.”

“Employers also have the unilateral right to cancel a work permit and terminate her employment without justification,” she notes. “As a result, workers who wish to claim their right to a weekly day off may end up losing their jobs instead.”

Of late, Singapore has been facing a severe shortage of FDWs because many Indonesians and Filipinos, who form the bulk of the FDWs here, now prefer to go to Taiwan and Hong Kong where the wages are higher and working conditions better.

Gee thinks the cost of placement needs to be regulated, pay levels raised and a system of part-time domestic work introduced to encourage locals.

“It could be attractive to locals who cannot take on full-time jobs and also to employers would not have to provide accommodation and may find it cheaper to pay a daily worker to come in, say for two hours a day,” Gee said.