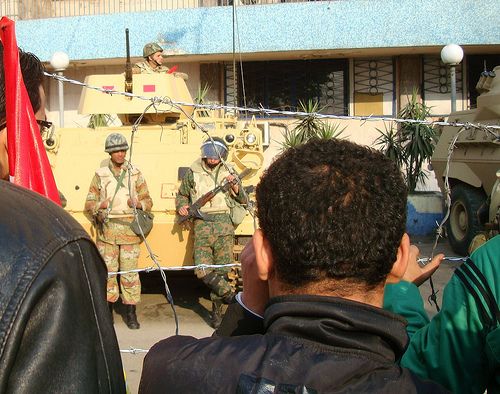 WASHINGTON, Mar 23 2012 (IPS) - The U.S. State Department announced on Friday that military aid to Egypt will resume, citing a national security waiver that was included in the most resent appropriations legislation on foreign assistance.

“These decisions reflect America’s over-arching goal: to maintain our strategic partnership with an Egypt made stronger and more stable by a successful transition to democracy,” Victoria Nuland, a spokeswoman for the State Department said in a statement.

“The secretary’s decision to waive is also designed to demonstrate our strong support for Egypt’s enduring role as a security partner and leader in promoting regional stability and peace,” Nuland added.

The announcement comes after U.S. lawmakers conditioned aid on Egypt’s progress in transitioning to a verifiably democratic system of governance – an unprecedented move since the U.S. began supplying Egypt with roughly 1.3 billion dollars in aid after it signed a peace treaty with Israel in 1979.

Relations between the U.S. and Egypt hit an all-time low late last year when Egyptian security officials raided the offices of several U.S. government-funded democracy-promotion organisations and charged several of the employees with crimes against the state, which elicited a temporary hold on Egyptian aid.

In February, Egypt permitted the remaining U.S. citizens who were charged in the incident to leave the country after initially placing travel restrictions, pending the trials. According to Freedom House, a U.S.-based human rights advocacy organisation, nearly 400 Egyptian NGOs are still under investigation or facing similar charges.

The announcement, in the works for several weeks, has drawn harsh criticism from human rights groups and regional experts who have characterised U.S. policy since the fall of Egyptian President Hosni Mubarak in February 2011 as being callously attuned to U.S. regional interests rather than genuinely supportive of the popular calls for meaningful reforms.

“Amnesty International opposes the funding, sale, or transfer of arms internationally where there is a substantial risk that the specific arms in question will be used to commit or facilitate serious human rights violations,” Sanjeev Bery, Amnesty International’s advocacy director for the Middle East and North Africa, said on Friday.

Earlier this month, Amnesty International sent an open letter to U.S. Secretary of State Hillary Clinton stating that “waiving the certification requirement would forfeit a key form of pressure for the advancement of human rights.”

According to a Gallup poll released on Friday that canvassed Egyptian public opinion between January and February 2012, 56 percent of respondents thought that closer relations with the U.S. was a “bad thing”.

“A resumption of military aid at this point also sends the wrong message to the Egyptian people – that we care only about American NGO workers, not about the aspirations of the Egyptian people to build democracy,” David J. Kramer, president of Freedom House, said in a release on Thursday.

“The U.S. government risks repeating the mistakes of the past, indulging the Egyptian military in the name of regional stability while ignoring what the Egyptian people want…Stability in Egypt is best achieved by supporting a full transition to a democratic government, which will uphold human rights and a free society,” Kramer said.

Some observers have emphasised that, given the U.S. citizens’ return, attention has shifted to the outstanding weapons contracts between the Egyptian government and U.S. arms manufacturers, such as Lockheed Martin, which would have gone unpaid if the hold on U.S. military financing were to have continued.

Senator Patrick Leahy, who authored the amendment requiring a national security waiver if military aid were to be resumed, and a strong supporter of the Barack Obama administration, voiced concern over the announcement on Friday.

“Waiving the new conditions on democracy and human rights is regrettable, and handing over the entire 1.3 billion dollars at once to the Egyptian military compounds the mistake by dissipating our future leverage,” Leahy said.

“Using this waiver authority, at this time, sends a contradictory message. The Egyptian military should be defending fundamental freedoms and the rule of law, not harassing and arresting those who are working for democracy.”

According to a foreignpolicy.com blog post by Josh Rogin on Thursday, there was some confusion in Congressional offices, before the announcement came today, about whether the State Department would be issuing a partial waiver and withhold some of the monies appropriated in the foreign military financing and economic stability accounts.

Nuland stated in a press conference Friday, however, that the national security waiver would entail resuming all foreign assistance to Egypt, including economic.

“The congressional legislation required that certification before the economic aid could go forward. So this decision, essentially, releases that economic aid,” Nuland said.

As Egyptians prepare for presidential elections in May, the decision to resume U.S. aid may have the unintentional consequence of a more deeply entrenched Supreme Council of the Armed Forces, the group of military officials that have retained power since Mubarak’s ouster and work as a disincentive for additional reform in civil rights laws, an independent judiciary, and civilian control of the government.

“(I)t is from that disadvantaged position that the United States will have to start the difficult process of building a new bilateral relationship with a changing Egypt, once the military (on which the United States continues to double down) leaves power and a new president and cabinet step in,” Michele Dunne, director of the Atlantic Council’s Rafik Hariri Center for the Middle East, wrote a blog on Friday.

“Will showing that Americans sacrifice our principles at the first sign of inconvenience stand U.S. in good stead with a new civilian Egyptian leadership, especially one with a heavy Islamist presence? Not likely.”