Q&A: Ghana’s Youth Are “The Future of the Nation”

UNITED NATIONS, Apr 28 2012 (IPS) - With a whopping 40 percent of Ghana’s population under the age of 24, the government’s ability to foster their development and include them in the country’s development are critical to the country’s future. 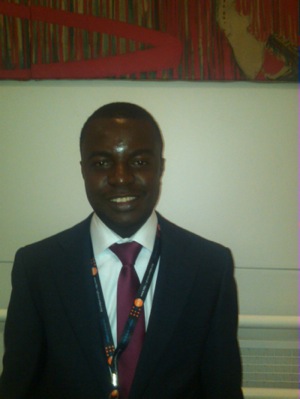 Samuel Kissi, executive coordinator of Curious Minds, a youth advocacy organisation in Ghana that works to promote a development agenda for youth. Credit: Courtesy of UNFPA

But although governments are verbally committed to the idea that the youth are the country’s future, they need “to actually make commitments to invest in young people”, says Samuel Kissi, executive director of Curious Minds, a Ghanaian media-based youth advocacy organisation.

“We want to push decision makers and politicians to move beyond only saying that young people are the future of the nation,” Kissi elaborates. He and other youth leaders spoke about poverty reduction and youth rights at a side event of the Commission on Population and Development at the United Nations last week.

“We try to explore opportunities for young people to get engaged,” explains Kissi. But all too often, certain policies, such as those regarding sexual and reproductive rights, are not implemented due to a lack of funding because they’re not included in the country’s development plans, he adds.

Kissi spoke with IPS correspondent Aline Jenckel about Curious Minds and how the organisation is trying to help young people not only understand the country’s development process and strategies but also engage in them.

Q: Which youth issues does your advocacy organisation Curious Minds cover and how do you carry out your work? A: On our radio program, which is broadcast across the country, we talk about development issues, sexual and reproductive health and rights, poverty reduction and education, including sexual education.

We look at it from a youth perspective. Once the national budget is released every year, we look at it from an apolitical point of view, evaluate which commitments concerning young people have been put in from last year and how much has been implemented.

We also do community outreach and talk about everything related directly or indirectly to young people’s comprehensive development, including HIV and AIDS.

Q: With the global population growing so rapidly, the development of sexual and reproductive health and rights is more relevant than ever. What are the main problems regarding this issue in Ghana, and what factors, such as bad policies, might contribute to these problems? A: The problems in Ghana are not due to bad policies. There is a comprehensive adolescent sexual and reproductive policy, but it may not have been translated directly into implementation.

Therefore there are gaps in the reach of services, so not all young people are fully educated in sexual and reproductive health. If they are, it is still not enough to reduce their vulnerability because they are hungry or unsheltered, and someone takes advantage of that.

Q: Which other partners help educate the younger generation on sexual and reproductive health? A: There’s a strong coalition between the government and the civil society. There is also help from religious institutions, although previously they were not allowing the distribution of condoms.

Nevertheless, the major media outlets of the country took on these issues and gained expertise, so now when they report about it in newspapers or on the radio, they do so from a more informed perspective. They are actually able to educate the population.

Q: There has been some controversy due to statements by Pope Benedict XVI concerning sexual issues, such as a prohibition on birth control. As many Ghanaians are Christian, how did these statements affect your country? A: The Catholic church is big in Ghana, but I would not go as far as saying that these statements had a significant impact on occurrences in the country and definitely not on policies. If you take the help facilities owned by the Catholic Church in Ghana, they now provide youth friendly services.

I am not quite sure if the Pope would be excited to hear this, but we made some progress in making the religious institutions understand that this is going beyond their understanding of how it should be, because there’s a real need in the communities, as young people are sexually active.

Q: What do young people in Ghana think about Kofi Anna’s run for the presidency? A: It was unexpected that he would run for president, especially in the previous election, which he didn’t win. I don’t think that it’s going to happen, but if he did I’m sure many young people would be excited about it.

However, I think it is important that he play the role he’s playing now, bringing peace to problematic parts of the world as best as he can. I hope he can inspire more politicians back home, so that they aspire to the high standards he sets.