ATLANTA, Georgia, Apr 30 2012 (IPS) - As the United Nations and countries around the world look at cooperatives as an alternative economic model for the production of energy, rural energy cooperatives have thrived for over eight decades in the U.S., and citizens in some parts of the country are beginning to reclaim them through the democratic process. 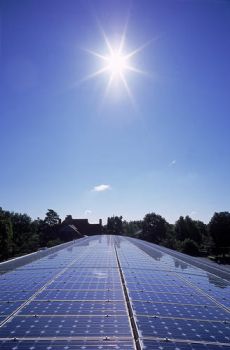 Cobb EMC's new board voted to pursue solar energy through a power purchase agreement. Credit: Living Off Grid/CC BY 2.0

There are more than 900 rural electric cooperatives, or Energy Membership Corporations (EMCs), providing electricity to 42 million people in 47 U.S. states.

Georgia has the largest network of EMCs in the nation in terms of the number of customers served, with 42 customer-owned EMCs providing electricity and related services to four million people, nearly half of Georgia’s population, across 73 percent of the state’s land area.

Originally, the EMCs were part of a New Deal initiative to bring electricity to rural areas because private enterprise was not doing it. The federal government provided seed money credit to get them going, and the programme was run under the Rural Electric Administration.

“When the (energy) co-op movement started, it was very democratic,” Seth Gunning, organising associate of the Sierra Club’s Beyond Coal Campaign, told IPS.

“Very quickly, though, it was sort of taken over by the same social institutions that run local governments and local businesses, and it sort of turned into this social club thing, that still exists all over Georgia. If you have a brother-in-law that sits on board, and there’s a vacancy on the board, you’re likely to get that seat,” Gunning said.

Most citizens and energy consumers in Cobb County, Georgia, did not realise they were members of the Cobb EMC, or what privileges that brought them, until a recent scandal in which it was revealed that the Cobb EMC CEO and Board of Directors were engaged in racketeering.

Cobb EMC, a non-profit, had created a for-profit entity called Cobb Energy. The EMC contracted out all of its work to the entity at a 12 percent premium, while the EMC CEO and Board of Directors also served in the same positions at Cobb Energy, thus profiting from Cobb EMC.

Instead, the profits are supposed to be returned to the members or to community initiatives of members’ choosing, such as donations to nonprofit organisations or investments in community infrastructure.

A number of lawsuits were filed, included a lawsuit seeking that profits dating back to 1939 be returned to EMC members. Additionally, the CEO was indicted.

This debacle – which seemed like a soap opera, or, even more so, a telenovela – led Cobb EMC members to get involved in the democratic process again.

Community organisations such as the Cobb Alliance for Smart Energy (CASE) were formed. They recruited and vetted reform candidates to run for the Board of Directors, after a judge mandated the EMC hold board elections for the first time in over a decade. At one meeting before the election in September 2011, over 3,600 members showed up to vote on whether to accept mail-in ballots at the election. Prior Cobb EMC meetings had only had a few hundred members to show up.

At the end of the day, after elections were held in November 2011 and March 2012, every single member of the Board of Directors was replaced with a reform candidate.

A few days ago, the new directors held their first Town Hall Meeting for EMC members, and are expected to open up their board meetings for members to attend in the near future.

As a result, in January 2012, the new Cobb EMC Board voted to divest from two proposed new coal energy plants in Georgia, Plant Washington and Plant Ben Hill. Prior to that, Cobb EMC had been part of a consortium of several EMCs called Power4Georgians (P4G), that had planned to build the two new plants.

Earlier this month, plans for Plant Ben Hill were cancelled, in part because the Cobb EMC pulled out of the project. Only four Georgia EMCs remain as part of P4G; plans for Plant Washington remain on the table, but Gunning says he believes P4G will be unable to find an investor willing to take on the project.

Also, earlier this month, Cobb EMC’s new board voted to pursue solar energy through a power purchase agreement, marking a complete turnabout from investment in dirty energy towards clean energy sources for the co-op and its members.

According to Gunning, a very similar turnaround happened with an EMC in Pedernales, Texas, near Austin, and citizens in other parts of Georgia are working to reshape their EMCs.

Despite the difficulties and struggles that citizens have had with their local EMCs, Tom Barksdale, chairman of the CASE, said he still thinks EMCs are a good idea, so long as they are done right.

“I do believe that (energy) co-ops could work in less developed countries or developing countries for the same reason they originally worked in the U.S.,” Barksdale told IPS.

“I think co-ops work, but like any democracy, the members have to pay attention to what they’re doing. In that sense, small is better. They should be set up with specific areas, instead of as massive utilities,” he said.

“The co-op was the idea that neighbours, people who knew each other personally, would get together in relatively small areas to bring electricity to the area. The situation changed when what used to be a few thousand members became like Cobb EMC with over 200,000 members. It became unwieldy and got out of control,” he said.

“The good ol’ boys found out they could do whatever they wanted to and they could get away with it,” he said.

Barksdale also said that EMCs should have “institutional safeguards” such as open board meetings, open records, community meetings in addition to board meetings, and perhaps some government oversight.

“They shouldn’t be able to maintain fiction that they are private; they should be seen as quasi-public,” he said.