BRIDGETOWN, Barbados, May 30 2012 (IPS) - Mere weeks ago Arthur Smith, who has been farming here for more than 20 years, was dangling thousands of carrots in front of local consumers, but there were no buyers to be had.

Smith said he had 40,000 pounds of carrots in his fields to be sold, yet supermarkets were not buying from local farmers, something he said had to stop.

“You plant for market supply but right now rather than me being able to supply the market, it is being supplied by overseas growers,” a frustrated Smith said.

“If we believe that we are living in difficult financial times and we need to do something to assist to cut down on importation to save foreign exchange, this is what I’m doing – saving foreign exchange,” he added. 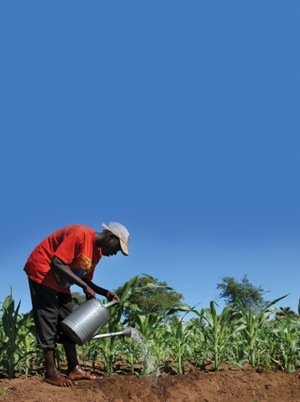 But Smith’s was not the lone pleading voice and now it seems the farmers are about to get what they’ve been asking for.

The highest agriculture official here, David Estwisk, has announced that the agriculture industry is being restructured in a bid to reduce a whopping 700 million dollar import bill.

The restructuring involves implementing a programme of local food production, which he said would aim to cushion the impact of imported food inflation due to the increase in global food prices.

“We in the Ministry of Agriculture…see the need for a complete restructuring and repositioning of the agriculture sector so that the sector can become one of the pillars of economic development in Barbados,” Estwick announced at a press conference here Wednesday.

“We see our role as providing the enabling policy environment, and facilitating the kinds of public and private sector investment needed to overcome the constraints facing the sector so that available opportunities can be exploited.”

“It is our desire to reorient the agriculture sector such that it is focused on the production of food to improve our food security, as well as the nutrition and health of the Barbados population and to save foreign exchange,” he added.

The agriculture minister said officials in his ministry would shortly begin “a complete restructuring and repositioning” of local agriculture, including a national consultation next Wednesday and a related comprehensive White Paper on Agriculture to be available by early July.

A long relationship with agriculture

Agricultural production was the primary occupation of early settlers to Barbados, not just for local consumption, but also for export to England and for trade with other colonial territories.

The first European settlers arrived here in 1627 and found much of the island covered with forests. By 1700, however, most of this forest was cut down and replaced with agricultural crops.

As a result, much of the landscape was transformed from natural ecosystems into agricultural ecosystems comprised of large mono-specific plantations such as sugarcane, small-scale vegetables, root crops and pastures with livestock.

The area being used for agriculture in Barbados has declined over the past two decades in comparison to the earlier part of this century, primarily through the demand for land for settlements and tourism development, such as for hotels and golf courses.

The demand for land for settlements is one of three major challenges identified by political scientist Peter Wichkam which he said the government would face in its new thrust. The other two are labour and praedial larceny, or the stealing of livestock or agricultural produce from a farm.

“We have a scarcity of land in Barbados because we want to build houses, and basically farmers find it more practical to allow their pastures to go fallow and basically claim it is not agriculture land,” Wickham told IPS. “They can get it subdivided and sold as house spots and they make a lot more money that way.”

As far as the labour is concerned, he noted that Barbados, like Antigua, does not have an ample supply of locals who want to go into the fields and work plantations. Yet he said islanders are opposed to having labour come in large quantities from neighbouring countries.

And thirdly, “it’s a Caribbean reality that people always feel that agricultural produce is there for them to take. Farms in Barbados are seldom of the size where you can get economies of scale,” he explained. “So they find that it is expensive to have the necessary security, and if you don’t have it, then then crops disappear.”

Chelston Brathwaite, chairman of the National Agriculture Commission, said there was a present need to rethink, refocus and reposition efforts and use land to satisfy consumer needs.

“We have to be careful not to use all our land for real estate. We have to reserve some for food,” he said.

Estwick said the concept of a White Paper being prepared is based on the premise that the sector needs to be modernised to the extent that it explores the linkages to other parts of the economy and fulfills its role in contributing to economic development.

“The White Paper will assist us in our endeavours to effect the repositioning of the agriculture sector,” he said.

Policy areas to be developed by the White Paper include land use, praedial larceny, food and nutrition security, food imports, investment in the sector, promotion of inter sector linkages between the food and agriculture sector and others sectors such as tourism, manufacturing and energy.

Other areas would be capacity building and the development of human resources, the development of a sugar cane industry, incentives and technical and financial support to the sector, and the role of other national, regional and international agencies in support of the sector.