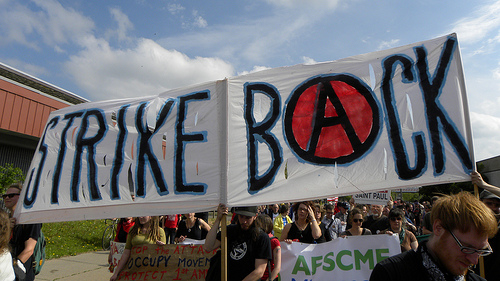 A May Day march in the midwestern city of Minneapolis. Credit: Fibonacci Blue/CC By 2.0

NEW YORK, May 1 2012 (IPS) - Tens of thousands of people took to the streets here and around the United States Tuesday calling for an end to what they described as the mounting and corrosive influence of money in politics.

“Why let over 18 million homes stand empty when there are three million people without homes?” asked Pham Binh, an activist affiliated with the umbrella anti-capitalist grouping known as Occupy Wall Street (OWS), referring to the mass foreclosures that have swept the country since the financial meltdown began four years ago.

For example, between 2007 and 2009, the profits earned by Wall Street firms increased by 720 percent, while during that same period, U.S. citizens’ home equity was slashed by 35 percent.

On May Day, organisers from a wide array of labour, student and OWS affiliates called a mass march to Wall Street, where many multi- billion-dollar firms operate and influence the U.S. government’s decision-making process though their lobbyists.

At the rally, speaker after speaker raised questions about the lavish spending on U.S. military interventions abroad and drastic cuts in budget expenditures on health and education at home, and the failure to create jobs and alleviate poverty.

“They talk about economic recession,” said Charles Twist, a protester in the crowd. “It’s a manufactured crisis. The postal service says it’s a financial crisis. That’s a lie. They have 75 billion dollars in overpayment for retirees’ health benefits.”

Twist, who has served the U.S. Postal Service for more than a decade, added: “They have all this money, and yet they want to privatise. Basically, there is this one percent of the population at Wall Street who are behind it.

“If the Postal Service was privatised, thousands of communities would be affected all across America. As a postal worker, I know how many people send packages to Ghana, Chile, and Dominican Republic, you name it,” he said.

Sanding next to him in the crowd, Kendall Jackson, who works as a housing rights activist, noted that more than 40,000 New Yorkers are forced to take refuge in so-called homeless shelters. “Why?” he asked, adding, “There are 16,000 among them who are children.”

“The one percent on Wall Street is not only making thousands of us poor and homeless, but also destroying the future of our children,” she said.

“Look at that ugly high-rise,” Jackson said, pointing to a Bank of America branch. “A few years ago, it was a small fabric store.”

According to the Department of Economics at the University of Berkeley, California, New York State rebates 15 billion dollars annually in stock transfer taxes to Wall Street. This potential revenue to the state is lost in the hands of the richest one percent of New York’s population, whose income share is currently 44 percent of total New York State income.

Yoko Liriano, a psychology student at the City University of New York, said she wondered if she would ever be able to complete her studies because she has to work more than 32 hours a week just to pay her tuition.

“I work for six days a week. In addition to pay my rent, I have to pay 700 dollars a month. Just think about it. The U.S. government pays 30 million dollars to the Philippines in military aid. What is that?”

Like Liriano, Dinae Anderson, a high school student in Manhattan, expressed similar concerns about the government’s indifference to the need for investing in education. “It’s becoming really hard to live and work as a student. We have to keep on this struggle.”

At the rally, one college student held a placard reading “F—k your unpaid internship,” a slogan expressing the frustration of millions of unemployed college graduates whose professional skills are often used by employers to make profits but are never paid.

Before the march towards Wall Street, many speakers from immigrant communities voiced their concerns about deportations and lack of labour protections.

“We are all under attack as workers. We are exploited, underpaid and abused. We will march for all people who are oppressed,” said Patricia Francois, a Caribbean domestic worker who has marched on May Day for the last five years.

Since last year, when OWS started a series of protests in New York, hundreds of activists have been arrested and manhandled by police. No incidents took place till the time of filing this report, although the city deployed a heavy contingent of police, including helicopter surveillance of demonstrators.

According to one native New Yorker, this was the largest turnout for May Day he had seen in decades. “We said, no work, no school, no buying. Well, that didn’t (entirely) happen, but look how many thousands of people are here.”

“It’s a good beginning to challenge the one percent who rules,” he said.

Every year on May 1, workers all over the world are officially allowed to take a day off. Many take part in trade union rallies to express their solidarity with the industrial workers killed by Chicago police in 1886 while demanding shorter working hours.

But not in the United States, where the tragic incident took place a more than a century ago.