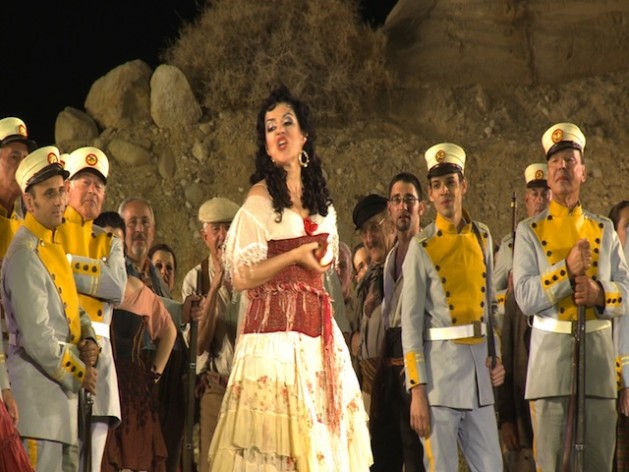 A performance of 'Carmen' at the Masada Fortress in the Israeli desert.Pierre Klochendler/IPS.

MASADA FORTRESS, Israel, Jun 12 2012 (IPS) - The imposing stronghold is almost transparent, barely noticeable, in the pitch-black desert. On top of the stands, with a thousand kilowatts at his finger’s tip, Avi Yona Bueno turns the night into lights, revealing sets, sites, and sounds. “I’m god,” smiles the lighting designer. “I’m god to my children.”

For five summer nights this week, George Bizet’s ‘Carmen’ is transported from the bull arena of Seville to the lowest point on earth, at the foot of the ancient fortress, a UNESCO World Heritage site of majestic beauty that rises from the Judean desert and dominates the Dead Sea.

The popular opera tells the story of the free and fiery Spanish gypsy torn between her love for Don Jose, a dragoon soldier, and for Escamillo the toreador.

Who doesn’t know that “love’s a gypsy’s child that’s never known the law”? Seductive arias and wild flamenco choreography are performed in extravagant costumes in this grandiose celebration of passion and hatred. “It’s like being on a movie set!” exclaims Nancy Fabiola Herera, ‘Carmen’, while putting a final touch of powder on her beaming face in the make-up tent.

On stage, the Venezuelan diva enflames the audience – in turn temptress eating a red apple; temple of seduction cajoling ‘Don Jose’; femme fatale pointing a knife at the dragoon’s crotch; rebellious and liberated, as she frees herself from her gaoler’s infatuation, swirling around him with a rope like a lasso, catching his neck – or is it his heart? “It’s the ultimate job holiday!” marvels Marco Berti, who interprets the mesmerised ‘Don Jose’.

“You’d best beware!” sings ‘Carmen’, to the Cuban dance Habanera – lest you lose your head and heart to the most stunning opera performance ever produced in Israel. Berti is bewildered: “Who thinks of staging an opera in the desert, nobody in the world!”

But not all is wonderful. “Sometimes with the desert wind, it gets very dusty; and with the scorching heat, it’s not easy for us,” complains Herera. “But it makes it very real.” Anna Malavesi, her back-up, fell ill during the rehearsals.

For a night at the opera purists might indeed prefer the enclosed venue of a theatre, where recitalists act less and sing without microphones. “It’s not only about the voices – it’s about the show, the whole thing. It’s more striking. For that, it’s better. For us as singers, it’s a challenge,” acknowledges Herera with a smile.

The challenge by numbers: 750 local and international performers in 3,000 costumes including the soloists, the flamenco dancers, the musicians of the Israeli Opera Symphony Orchestra, the Israeli Opera Choir and the Encore Youth Choir. All in all, 2,500 participate in this lavish production.

Not to mention the horses. “The crowd, the lights, the smoke, the castanets – there’s a lot of pressure on them,” explains Dubby Selman, the animal coordinator. “I’m very loose on the reins when I don’t want anything; and I’m very tight when I want something. I teach them how to swallow their fear,” he demonstrates on the neighing Goldstar.

Fear of losing her voice had Herera perform more like a cabaret singer than an opera recitalist during the dress rehearsal – with occasional mezzo-soprano bursts.

A 66-metre deep by 60-metre wide stage covers a full 4,000 square metres; specially-erected stands with 7,500 aficionados every night – in total, 40,000 are expected to attend this festival of lights and sounds, including 4,000 cultural tourists. “What better way to celebrate our honeymoon than to watch Carmen!” a British visitor says exuberantly during the entr’acte.

It’s taken a whole year of preparations to produce such a sumptuous show. “The reward is huge. First of all, the hotels’ occupancy – the hotels in the area and in Jerusalem are full,” explains Dov Litvinov, head of the Dead Sea Regional Council. “For us, it’s better than a worldwide advertising campaign.”

Call it a hall of culture or a hall of nature, ‘Carmen’ in Masada adds to the trend of producing major cultural events in archaeological and other biblical sites. This week, the Israeli opera also performs Verdi’s ‘La Traviata’ at Zedeqiyah’s Cave, a huge antique grotto located near Nablus Gate, under the walls of the Old City of Jerusalem.

“We receive – everybody, the audience, the performers – a very special energy. Masada is like a second Jerusalem!” the theatrical Berti emphasises, his tenor voice ringing out at the mirror of the dressing tent.

The “second Jerusalem” is in fact the closing chapter of the Great Revolt of the Jews against the Romans in the first century CE. The besieged rebels killed themselves to escape slavery. Now 2,000 years on, the last stand of the rebels has become the national symbol of a long struggle for liberation and independence. Masada personifies their people’s resolve to live freely in their own land, say Israelis.

Performing an opera comique about lust, desire and temptation in such tragic decor would seem incongruous. Not for Litvinov. “So many years have passed since the Masada tragedy. Yet, we, the Jews, are still here, staging a mega-production. This is the main thing – we are here – not the kind of opera we bring here.”

Giuseppe Verdi’s ‘Nabucco’ and ‘Aida’ were staged here over the last two years. “It shows an unknown cultural facet of Israel to the world,” adds Hanna Munitz, the Israeli Opera director.

Notwithstanding the pride – national and cultural – shared by the organisers, Herera finds common ground between her ‘Carmen’ and Masada. “At the end, there’s redemption, somehow. The Masada people died because they believed in their liberty. Before being captured by the Romans, they decided to die free, and ‘Carmen’ is the same. She prefers death before she compromises herself to anything else that is not her freedom.”