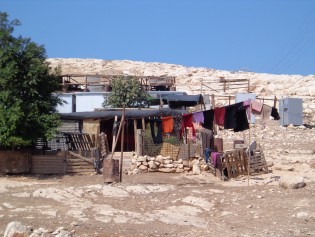 By Pierre Klochendler
Majda el-Batsch was eight years old in June 1967 when she heard about the war that year. "I didn't know what war meant," she recalled. More than four decades later, the Palestinian reporter is still grappling with the meaning of what is known as the Six-Day War.

By Pierre Klochendler
“We feel like we finally live a normal life in a normal country,” marvelled a popular radio host. Normalcy – this rare appreciation by Israelis of the privilege to indulge in small talk about the stormy weather that’s wreaked the whole region – is so abnormal here.

By Pierre Klochendler
It came like a bolt from the blue on this serene city perched in the hills of Galilee. Palestinian President Mahmoud Abbas declared on Israel’s Channel Two television earlier this month, “I want to see Safed! It’s my right to see it, but not to live there.”

By Pierre Klochendler
Ali Shuruf turns on the lights, that shine into a gaudy living room. Beyond the window, the dominant colour is uniformly grey: the house stands literally against a wall. Not just any wall – the infamous eight-metre cement wall separates Palestinians from Israelis.

By Mitchell Plitnick
The Democratic National Convention erupted in controversy this week over the removal of a clause in the party platform stating that Jerusalem should remain Israel’s undivided capital and only grew worse when the wording was hastily re-inserted.

By Pierre Klochendler
“A prayer knocks till the door opens,” a songster from the Church of the Holy Sepulchre sings from outside the door.

By Pierre Klochendler
Kosher, in spoken English, might mean ‘proper’, ‘acceptable’, ‘legitimate’. Yet, sourced in the Bible, the Hebrew word incontrovertibly finds its way in Jewish cuisine. Food is kosher when suitable for consumption – that is, according to a set of religious dietary laws or kashrut.

By Pierre Klochendler
The imposing stronghold is almost transparent, barely noticeable, in the pitch-black desert. On top of the stands, with a thousand kilowatts at his finger’s tip, Avi Yona Bueno turns the night into lights, revealing sets, sites, and sounds. “I’m god,” smiles the lighting designer. “I’m god to my children.”

By Jillian Kestler-D'Amours
A group of Palestinian Jerusalemites steps down from a crowded bus to let two Israeli soldiers climb aboard to check identity cards, below the aluminum roof of this newly operational checkpoint terminal.
ADVERTISEMENT ADVERTISEMENT