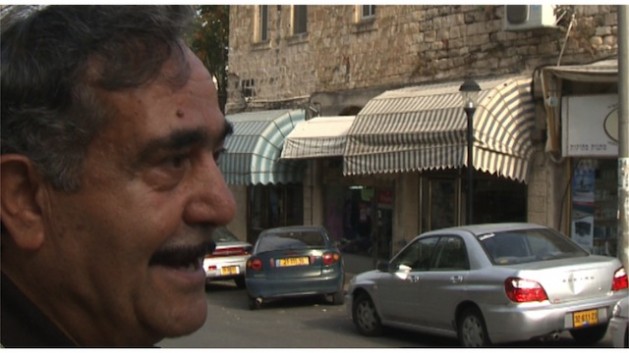 SAFED, Northern Israel, Nov 12 2012 (IPS) - It came like a bolt from the blue on this serene city perched in the hills of Galilee. Palestinian President Mahmoud Abbas declared on Israel’s Channel Two television earlier this month, “I want to see Safed! It’s my right to see it, but not to live there.”

During Israel’s war of independence (1948-9), all Palestinian residents fled the city in which they would live with their Jewish neighbours. Born in Safed, Abbas was 13 when he and his family joined the flow of refugees.

Abbas was referring to the Palestinian refugees’ “right of return” to what’s now home for Israelis – one of the conflict’s elemental issues.

For most Israelis, the historical demand constitutes an existential threat. Compliance to the “return” of millions of refugees to Israel would destroy their state from within, they argue, for it would irrevocably alter its Jewish majority.

Addressing Israelis concerns, Abbas seemed to forsake what‘s considered by most Palestinians as their undeniable right. He’d spoken only about himself, he later clarified.

Campaigning for his re-election on a resolutely right-wing ticket, incumbent Prime Minister Benjamin Netanyahu promptly dismissed Abbas’s pledge. “There’s no connection between the Palestinian Authority Chairman’s statements and his actual actions,” read a statement on his behalf.

Safed isn’t the country’s highest city, it’s a city high on spirituality. It’s here that Kabbalah or Jewish mysticism was defined hundreds of years ago.

Once a year on nearby Mt Meron, the faithful congregate at the grave of Rabbi Shimon Bar Yochai, second-century author of the Zohar or Book of Splendour, Kabbalah’s deepest text and source of esoteric knowledge.

Following the expulsion of the Jews from Spain during the Inquisition, eminent rabbis such as Isaac Loria and Yosef Karo set foot in town, revealing the secrets that illuminate their divine chart – of the Sefiroth or enumerations, the ten attributes of God – as it unfolds itself in the mystery of Creation.

The intriguing statement of Safed’s illustrious ex-resident disconcerts Kabbalists. “Kabbalah spirituality doesn’t create any conflict with any tradition, belief or faith,” is the diplomatic reaction of Eyal Reiss, director of the Tzfat Kabbalah Centre. “From Safed, we send a pure godly, peaceful message and knowledge to all.”

Besides, Safed is one of the Holy Land’s four cities holy to Judaism. Each one corresponds to one of the four fundamental elements of creation.

Hebron stands for land, for it is recorded in Genesis that Abraham, the biblical patriarch of the three monotheistic religions, made the first-ever purchase of a plot of land there. Blessed by a lake, Tiberias is symbol of water. Jerusalem is of fire for the second Jewish Temple’s destruction by the flames of war in 70 AD.

“Since then, the divine presence resides in Safed. The most spiritual element that comprises this beautiful creation is the air of Safed that reveals the soul’s hidden channels of Kabbalah.”

Indeed, “there’s something in the air wherever you look around” while ascending the Old City’s steep cobblestone stairways, Paul Young could sing in Safed.

Not all has always been idyllic though. Safed was conquered by Crusaders, Mamluks, Ottomans, British, suffered plagues and earthquakes, and Arab pogroms against Jews, the latest in 1929.

Everlasting yet forgotten, Safed exudes a sense of forsaken greatness concealed in the murmur of its prayers.

For it’s said that the messiah will come to Jerusalem from Safed, ushering in eternal freedom and peace for all to comprehend the creator’s impenetrable wisdom. “We’re just there – any second – it’s now,” affirms Reiss.

Abbas’s right to return to Safed – as a visitor – has become the talk of the town.

An incredulous resident inquires, “Abbas used to live here?” “Nothing for him to look for,” retorts another.

The mayor’s cynicism to the appeasing declaration stems from the widespread allegation that Abbas would have been implicated in the planning of the hostage-taking attack on an elementary school in 1974 by Palestinian militants, which resulted in the killing of 22 pupils – 20 from Safed.

“As long as Abbas doesn’t apologise and express remorse, he’s an unwanted visitor,” declares the mayor.

“Abbas used to cross that bridge on his way home,” Gaby Hameiri, one of the city’s elders and a local celebrity, points to an overpass. He claims he remembers Abbas. “He’s only two years older than me. Our fathers were partners. Dad had a dairy commerce; his father had goats and milk.”

In 1944, Hameiri accompanied his father to the Abbas household. He’d come to implore his partner to intercede with the British authorities on behalf of a brother who had been arrested on suspicion of affiliation to the Zionist Stern gang that fought the British Mandate of Palestine occupation.

The visit turned sour. “‘Your son’s a terrorist,’ his father said. Dad retorted, ‘We’re only protecting ourselves from you Arabs.’ There was a bad feeling in the air. His sons were there. Surely, Abbas must’ve been present.”

A sign of times gone by – the house on Jerusalem Street now accommodates an insurance company, a cell phone shop. In the courtyard, a grapevine twists its way up, as old and enduring as the conflict. Hameiri leans on the trunk – dolour, rancour, still frozen in time.

“I’d tell Abbas, ‘You’re a Safadi, an old man now – just like me. I read your lips. I wish I’d read into your heart that you finally accept that this land is no less ours than yours.’”

Give back to Safed what belongs to Safed. The study of Kabbalah may provide a soothing balm for the aggrieved soul. “Why not?” says Reiss. “Let Abbas come and study here. If he finds it hard, I’ll teach him by Skype, even in Arabic.”