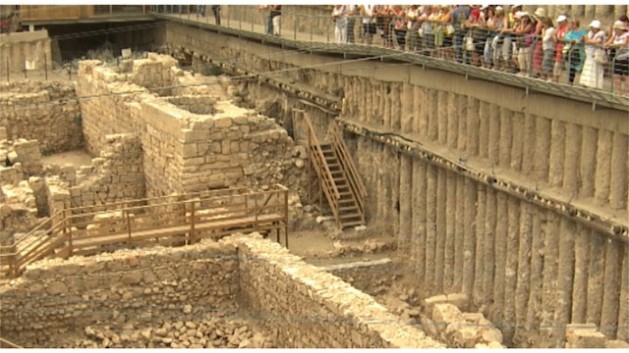 OCCUPIED EAST JERUSALEM, Aug 13 2012 (IPS) - “This is King David’s palace!” proclaims the Israeli tour guide with much fanfare, ignoring the cautionary “King David’s Palace?” legend on the sign. Opportunely opening the Bible, he reads from 2 Samuel 6:16, “As the Ark of the Lord came to the City of David…”

“Everything fits so well with the biblical descriptions!” marvels Amir Brightman, an Israeli security guard who escorts the tourists. “I feel so connected.”

The City of David archaeological site lies in the heart of the Palestinian district of Silwan, at the foot of the walled Old City.

Adjacent to it lies the Givaty excavation site. Year-round for the past five years, the former parking lot has been giving way to the largest, most ambitious, Israeli archaeological project ever undertaken not just in Jerusalem, but in the whole country.

And, the complex is most controversial.

Notwithstanding the professional critique that, here in situ, the Bible is still considered the legitimate archaeological guidebook par excellence, Palestinians insist that the purpose of revealing biblical Jerusalem is to buttress the Jewish bond to modern-day Jerusalem.

“Visitors come to the City of David not even realising that we live here,” protests Ahmad Qaraein, who lives in a three-floor building with a panoramic view over the Givaty site. His family has lived here for generations.

Qaraein volunteers as counsellor at the provisional “We Love Silwan” summer camp, another parking lot located just a few metres down the street. Like many Palestinians, he believes Israel digs here less out of archaeological interest; rather, he claims, the ulterior motive can be found in Israel’s biblical claim over east Jerusalem.

“Not only King David lived here. They scrapped a 1,200-year-old Islamic cemetery found on the upper floor,” he says.

The accusation is refuted by Israel Antiquities Authority’s archaeologist Doron Ben-Ami: “Archaeology is a destructive profession – you dismantle later levels to reveal earlier ones. Besides, not all sites need to leave something. But because Jerusalem is a sensitive place, we decided to preserve sections of each period.”

“The Canaanite period,” he continues, pointing at several non-descript abysmal pits, “thousands of years earlier than King David, all the way down the Early Bronze Age. When the bedrock comes, archaeology ends; geology starts.”

And, politics enter the fray.

There’s one thing Israelis and Palestinians agree on – the battle for sovereignty over Jerusalem is the bedrock of their conflict. Palestinians want east Jerusalem as the capital of their future state.

“This house stays in Palestine,” reads graffiti adorned with the national colours near the Givaty site. “Silwan is our village – Jerusalem our land, our history,” stresses Qaraein.

In all 88 Palestinian houses have been served with demolition orders for illegal building, including the two upper floors of the Qaraeins’ dwelling. “Since 1997, we pay heavy yearly fines to postpone demolition.”

Palestinians object to the dearth of building permits issued by City Hall and, as a result, the many houses already demolished. “Stones are more important than the living,” Qaraein notes sadly, adding that the digs undermine the structure of many buildings.

Three years ago, a school partially collapsed, injuring 17 pupils. Residents blamed the incident on the archaeological tunnels running through Silwan.

The Givaty excavation is a hive of activity.

Students and volunteers dig and dust, making chains of buckets to evacuate soil, sorting pottery shards and ancient artefacts, exposing the long chain of conquests and re-conquests, of holy wars and crusades. In the last 2,000 years only, Jerusalem was captured 13 times.

For Qaraein, there’s only one occupying power. “Turks, British, Jordanians, – they all left and we stayed. Israel will also leave,” he predicts. “We live under Israeli occupation since 1967. Since 1991 until now, we live under a second occupation, the settlers’ occupation.”

The site is administered by Elad, an Israeli right-wing association devoted to funding Jewish excavations as well as settlement buildings in the neighbourhood and across east Jerusalem.

Some 400 settlers live here amidst 50,000 Palestinians. Tension is rife. Qaraein was shot twice in the leg by a settler who’s still his neighbour. “Elad is a state within a state. They have every right. They’re unstoppable.”

Qaraein is adamant – Silwan’s City of David is part of a grand settler drive to drive the Palestinians from Jerusalem. “They don’t want us.”

“We’re in the core of the political conflict,” declares Yonatan Mizrahi, who runs alternative tours here. “How should we call the present – City of David, Silwan?”

As an archaeological activist for the Emek Shaveh NGO dedicated to exploring “the role of archaeology in the Israeli-Palestinian conflict,” Mizrachi maintains that “archaeology is a political trowel used to justify and legitimise Israel’s hold of, and belonging to, East Jerusalem – also within a future agreement.”

Were archaeologists to find an inscription, reading ‘Welcome to King David’s Palace’, would that grant Israelis the right to claim east Jerusalem is theirs, he contends.

“Archaeology reveals civilisations and changes of civilisations. How can this site belong exclusively to one nation? Between past and present, what is more important – layers from 8th century BCE, or today’s peoples? Jerusalem’s not only Jewish. On the other hand, Jerusalem can’t be denied it never was Jewish.” That is the dilemma.

Ben-Ami insists his is an apolitical, impartial, vocation. “I look at the site purely professionally. Whether monumental or small structures, dated to earlier or later periods – I respect all remains. It’s like asking a father whom of his children he prefers.”

Caught between archaeology and politics, between past and present, patiently waiting for the future to bury the present, Israelis and Palestinians know, the ancient battles for Jerusalem are very much alike today, and very much alive.