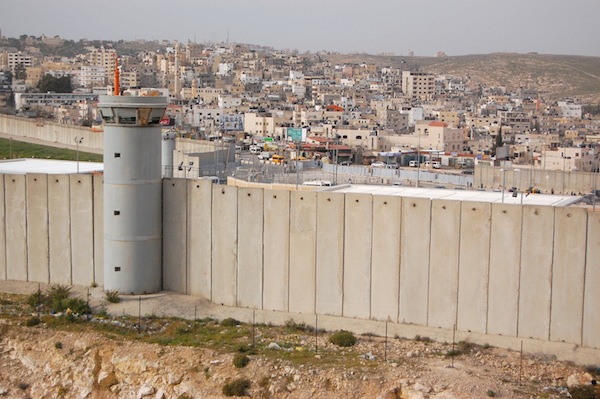 Israel's separation barrier as seen from Al Ram, once a thriving East Jerusalem community that now sits on the West Bank side of the barrier and has been severely economically affected. Credit: Jillian Kestler-D'Amours/IPS

OCCUPIED EAST JERUSALEM, May 26 2013 (IPS) - Thick locks hug the front gates of shuttered shops, now covered in graffiti and dust from lack of use. Only a handful of customers pass along the dimly lit road, sometimes stopping to check the ripeness of fruits and vegetables, or ordering meat in near-empty butcher shops.

“All the shops are closed. I’m the only one open. This used to be the best place,” said 64-year-old Mustafa Sunocret, selling vegetables out of a small storefront in the marketplace near his family’s home in the Muslim quarter of Jerusalem’s Old City.

Amidst the brightly coloured scarves, clothes and carpets, ceramic pottery and religious souvenirs filling the shops of Jerusalem’s historic Old City, Palestinian merchants are struggling to keep their businesses alive.

Faced with worsening health problems, Sunocret told IPS that he cannot work outside of the Old City, even as the cost of maintaining his shop, with high electricity, water and municipal tax bills to pay, weighs on him.

"It feels like they're coming again to occupy the city, with the soldiers and police."
-- Abed Ajloni

Abed Ajloni, the owner of an antiques shop in the Old City, owes the Jerusalem municipality 250,000 Israeli shekels (68,300 U.S. dollars) in taxes. He told IPS that almost every day, the city’s tax collectors come into the Old City, accompanied by Israeli police and soldiers, to pressure people there to pay.

“It feels like they’re coming again to occupy the city, with the soldiers and police,” Ajloni, who has owned the same shop for 35 years, told IPS. “But where can I go? What can I do? All my life I was in this place.”

He added, “Does Jerusalem belong to us, or to someone else? Who’s responsible for Jerusalem? Who?”

Israel occupied East Jerusalem, including the Old City, in 1967. In July 1980, it passed a law stating that “Jerusalem, complete and united, is the capital of Israel”. But Israel’s annexation of East Jerusalem and subsequent application of Israeli laws over the entire city remain unrecognised by the international community.

Under international law, East Jerusalem is considered occupied territory – along with the West Bank, Gaza Strip and Syrian Golan Heights – and Palestinian residents of the city are protected under the Fourth Geneva Convention.

Jerusalem has historically been the economic, political and cultural centre of life for the entire Palestinian population. But after decades languishing under destructive Israeli policies meant to isolate the city from the rest of the Occupied Territories and a lack of municipal services and investment, East Jerusalem has slipped into a state of poverty and neglect.

“After some 45 years of occupation, Arab Jerusalemites suffer from political and cultural schizophrenia, simultaneously connected with and isolated from their two hinterlands: Ramallah and the West Bank to their east, West Jerusalem and Israel to the west,” the International Crisis Group recently wrote.

Israeli restrictions on planning and building, home demolitions, lack of investment in education and jobs, construction of an eight-foot-high separation barrier between and around Palestinian neighbourhoods and the creation of a permit system to enter Jerusalem have all contributed to the city’s isolation.

Formal Palestinian political groups have also been banned from the city, and between 2001-2009, Israel closed an estimated 26 organisations, including the former Palestinian Liberation Organisation headquarters in Jerusalem, the Orient House and the Jerusalem Chamber of Commerce.

Israel’s policies have also led to higher prices for basic goods and services and forced many Palestinian business owners to close shop and move to Ramallah or other Palestinian neighbourhoods on the other side of the wall. Many Palestinian Jerusalemites also prefer to do their shopping in the West Bank, or in West Jerusalem, where prices are lower.

While Palestinians constitute 39 percent of the city’s population today, almost 80 percent of East Jerusalem residents, including 85 percent of children, live below the poverty line.

“Without freedom of movement of goods and human beings, how could you develop an economy?” he asked.

“You can’t talk about independent economy in Jerusalem or the West Bank or in all of Palestine without a political solution. We don’t have a Palestinian economy; we have economic activities. That’s all we have,” Odeh told IPS.

Israel’s separation barrier alone, according to a new report by the United Nations Conference on Trade and Development (UNCTD), has caused a direct loss of over one billion dollars to Palestinians in Jerusalem, and continues to incur 200 million dollars per year in lost opportunities.

Israel’s severing and control over the Jerusalem-Jericho road – the historical trade route that connected Jerusalem to the rest of the West Bank and Middle East – has also contributed to the city’s economic downturn.

Separation of Jerusalem from West Bank

Before the First Intifada (Arabic for “uprising”) began in the late 1980s, East Jerusalem contributed approximately 14 to 15 percent of the gross domestic product (GDP) in the Occupied Palestinian territories (OPT). By 2000, that number had dropped to less than eight percent; in 2010, the East Jerusalem economy, compared to the rest of the OPT, was estimated at only seven percent.

“Economic separation resulted in the contraction in the relative size of the East Jerusalem economy, its detachment from the remaining OPT and the gradual redirection of East Jerusalem employment towards the Israeli labour market,” the U.N. report found.

Decades ago, Israel adopted a policy to maintain a so-called “demographic balance” in Jerusalem and attempt to limit Palestinian residents of the city to 26.5 percent or less of the total population.

To maintain this composition, Israel built numerous Jewish-Israeli settlements inside and in a ring around Jerusalem and changed the municipal boundaries to encompass Jewish neighbourhoods while excluding Palestinian ones.

It is now estimated that 90,000 Palestinians holding Jerusalem residency rights live on the other side of the separation barrier and must cross through Israeli checkpoints in order to reach Jerusalem for school, medical treatment, work, and other services.

“Israel is using all kinds of tools to push the Palestinians to leave; sometimes they are visible, and sometimes invisible tools,” explained Ziad al-Hammouri, director of the Jerusalem Centre for Social and Economic Rights (JCSER).

Al-Hammouri told IPS that at least 25 percent of the 1,000 Palestinian shops in the Old City were closed in recent years as a result of high municipal taxes and a lack of customers. “Taxation is an invisible tool…as dangerous as revoking ID cards and demolishing houses,” he said. “Israel will use this as pressure and as a tool in the future to confiscate these shops and properties.”