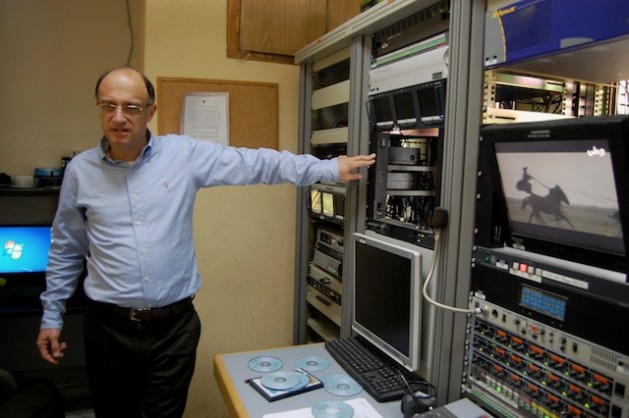 Director of media projects at Wattan TV, George Sahhar, at what is left of their television studios. Credit: Jillian Kestler-D'Amours/IPS.

RAMALLAH, Occupied West Bank, Nov 14 2012 (IPS) - George Sahhar opens the door to a closet-sized control room, where a cacophony of wires, routers, papers, and computer screens are messily strewn across a desk.

“This is where the transmitter was,” Sahhar said, pointing to a gaping hole amidst the disconnected wires, before continuing on to a bigger control room, where more equipment is missing. “We don’t know why it happened. It’s inexplicable and unacceptable.”

Human rights groups condemned the incident as a blatant violation of Palestinian media freedom. Wattan TV, which is owned by local Palestinian civil society groups and partly funded by international donors, estimated that the raid incurred a financial loss of 300,000 dollars.

Before losing its equipment, the station broadcast a variety of political, cultural and social programmes to the West Bank and Gaza Strip. Today, it no longer broadcasts in Gaza, can’t host live broadcasts from its studios, and airs only limited coverage in the West Bank.

“It’s very hard. A process that would take us four or five seconds now takes us half a day to complete without the transmitter,” Sahhar told IPS. “The pressure has been enormous on our staff. What if we bring in another transmitter and (the army comes) back an hour later?”

Now, the station is appealing to the Israeli Supreme Court to have its equipment, files and archives returned, and to get an explanation about why the raid took place. The Court granted the Israeli government an extension until Nov. 14 to provide some answers.

As of noon local time, Wattan TV officials told IPS that they were still waiting for an update from the court. “Today is the final day, but we are still waiting and coordinating with our lawyer. We are not optimistic at all,” said the station’s general director, Muamar Orabi.

At the time of the raid, the Israeli authorities argued that Wattan TV’s frequency was interfering with radio signals in Israel, including those at Ben Gurion airport near Tel Aviv. Station managers, however, have staunchly refuted this claim.

“It’s a baseless accusation,” Sahhar said, explaining that Wattan TV has been licensed with the Palestinian Authority (PA) since 1996, and is also a member of the International Telecommunications Union in Switzerland. “From 1996 until today, frankly, I’m unaware of any airplanes crashing as a result of our frequency.”

The Oslo Accords agreement, signed between Israeli and Palestinian leaders in the early 1990s, organised Palestinian and Israeli telecommunications frequencies. It stipulated that neither side’s frequencies would interfere with the other’s, and that Israel will not impede the proper functioning of the agreed-upon Palestinian stations.

A Joint Technical Committee (JTC) was also set up to deal with any issues arising between the Israeli and Palestinian telecommunications systems. “If there is a dispute about the frequency, the Israelis need to tell the Palestinian Authority and the PA will deal with it,” Sahhar said.

According to Mada, the Palestinian Centre for Media Freedoms and Development, since 2008, Israeli soldiers have stormed 11 Palestinian media headquarters, and confiscated equipment belonging to at least 14 media institutions.

“It’s a war of airwaves,” said Mada Director Mousa Rimawi from his Ramallah office. “(The Israelis) want to dominate the frequencies. They want to occupy everything.”

Rimawi explained that confiscating equipment from Palestinian media outlets has a very negative psychological impact on Palestinian journalists, which in turn impacts the quality of their reports and investigations.

“Palestinians try to continue their work, but in the back of their mind, the threats are still there. (The Israeli army) can come any day at night and no one can stop them,” Rimawi told IPS. “The Israelis are behaving like they are above the law. Because they are not pressured or punished, they are continuing their violations against media outlets, against journalists and against Palestinians in general.”

The Israeli army raided Wattan TV’s offices for the first time in 2002, in the midst of the Second Intifadah (uprising). Upset by the station’s critical coverage of its policies, the Palestinian Authority also shut the station down five times between 1996 and 2002.

For George Sahhar, while it wasn’t the first such incident, the latest raid on Wattan TV’s offices was akin to an attack on Palestinian culture. “Media work is art, so it’s really painful when someone takes it away violently. There is still a tremendous sense of apprehension,” Sahhar said.

“But we will continue to insist on being the voice of reason, with our limited resources. We want to inform Palestinians and create bridges to come up with a common vision of where we want Palestine to be. We have our eye on the future.” (END)