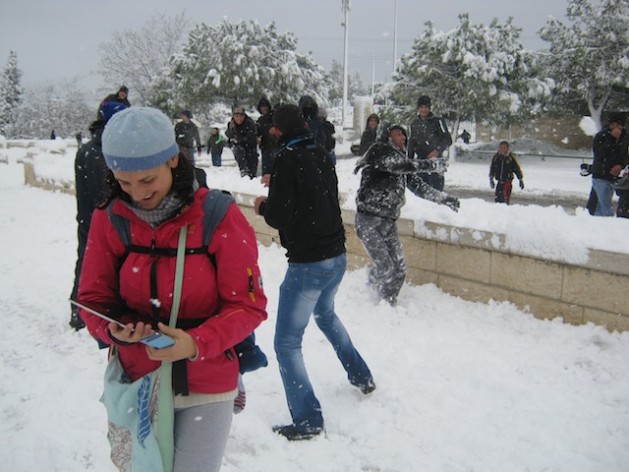 Israelis and Palestinians in a snow fight in Jerusalem. Credit: Pierre Klochendler/IPS.

JERUSALEM, Jan 11 2013 (IPS) - “We feel like we finally live a normal life in a normal country,” marvelled a popular radio host. Normalcy – this rare appreciation by Israelis of the privilege to indulge in small talk about the stormy weather that’s wreaked the whole region – is so abnormal here.

They’re reeling from the worst winter storm in two decades and yet – if it wasn’t for the six Israeli and Palestinian fatalities – life would seem trouble-free for most Israelis.

For five days this week, they’ve been distracted from the lack of sunny diplomatic horizons, enjoying a welcome respite from the intense politicking, which burdens their country’s public life.

Israelis go to the polls Jan. 22 and know what was and what will be; Prime Minister Benjamin Netanyahu will continue to rule.

In Jerusalem, Israelis and Palestinians could be seen engaged in snowballs battles. Where it wasn’t stifled by the silence of the snow from the Galilee to the Negev desert, the electioneering chatter was flooded under heavy rains in the lowlands and valleys.

Who cares electoral campaigns are in full speed with prime-time radio and TV ads, when Netanyahu’s popularity seems as high as sea tides crashing against the littoral?

In fact, ever since he became prime minister four years ago, polls have invariably been showing that, at anytime during his tenure, he’d been ensured to remain at the helm for four more years.

Yet, precisely because he’s unbeatable, recently, the number of seats his electoral list would garner has declined steadily as if victory validated the law of diminishing returns. Too much support might paradoxically lead to too much disaffection.

General elections are conducted in accordance to a proportional parliamentary system of coalitions. People vote for political parties’ lists of candidates. The party which scores the highest number of seats in proportion in the 120-seat Knesset Parliament is usually chosen by the president to form a governing coalition.

According to a poll conducted by Dialog and published in the liberal newspaper Haaretz, an almost consensual 81 percent of Israelis expected him to lead another coalition last month. But surveys now show a turndown for the joint list under Netanyahu from currently 42 seats to 32.

The diminishing support in favour of Netanyahu is largely to blame on his decision to unify his right-wing Likud party list with Avigdor Lieberman’s more right-wing Israel Beitenu party under the Likud-Beitenu ticket, pundits concur.

In politics, ‘united we stand’ doesn’t necessarily translate into a strong showing at the polling station.

The more the Likud-Beitenu combination seems a winning card in weekly polls, the less Israelis are inclined to confirm their forecast, showing instead their preference for electoral lists which more accurately reflect their personal expectations and interests.

At the Likud primary prior to the merge, popular moderates were evicted from realistic slots in the electoral list by settlers and their supporters. That alienated Likud supporters who consider moving towards more centrist alternatives.

Ironically, in the final analysis, most disaffected supporters appear to follow the call of the party which Netanyahu and Lieberman try to emulate.

Hence, the slide towards Naphtali Bennett’s even more right-wing Jewish Home party – a revamped version of the former National Religious Party – with a more secular, modern appeal, which caters to settlers’ interests.

So, a fortnight ago, another survey published in the centrist daily Yedioth Aharonoth predicted that Netanyahu would win – if only by default – as his shrinking coalition would enjoy an advance of only four seats on a united front of leftist Zionist and Arab parties.

But such scenario of the Left joining force in an electoral, let alone, political alliance is right now improbable.

A polls’ aficionado often accused of running his politics according to public opinion’s fluctuations, Netanyahu understands he will confirm his re-election prospects on Jan. 22; but in that case, he might lead a much slimmer parliamentary majority than the one he was promised only last month.

So, after committing the original sin of mistakenly criticising his traditional allies (and thus, because of infighting, weakening his own camp), Netanyahu now hopes to close ranks, sounding the usual alarm of a potential leftist January surprise.

He now reasons that a fresh attempt to scare alienated voters back to the fold by persuading them of a potential victory by the Left strengthens his own victory prospects.

Yet, another surprising poll commissioned by the Daniel Abraham’s Centre for Middle East Peace and conducted by Dahaf and Rafi Smith recently showed that most right-wing Israelis would support a two-state solution and a division of Jerusalem in exchange for peace.

The Dahaf poll showed that 57 percent of supporters of Lieberman’s and Bennett’s parties support such agreement, with only 25 percent opposed to it.

In other words, Israelis won’t push Netanyahu to an agreement that runs contrary to his own credo (which, by and large, they espouse if they vote for him), but they’d support a peace initiative, probably secret negotiations – as long as they won’t be informed.

Diplomatic paralysis has marked Netanyahu’s premiership. In a second term, the incumbent leader would want to define his policy, set his legacy.

Ruling a large right-wing coalition might constrain him to a paralysis similar to the one he’s been managing thus far.

But a diminished coalition won’t allow him more freedom to rule either, just more of the same paralysis. “A strong prime minister, a strong Israel” reads Netanyahu’s wishful thinking on billboards across the country.

With him again at the helm, what’s predicted might hardly be a recipe for Israelis to regain their passion for politics, and their enthusiasm for the ‘Netanyahu’ ballot.

Not Netanyahu’s politics, but the vagaries of the Israeli electorate’s voting patterns might be as unpredictable as the weather.

Israelis and Palestinians in a snow fight in Jerusalem. Credit: Pierre Klochendler/IPS.