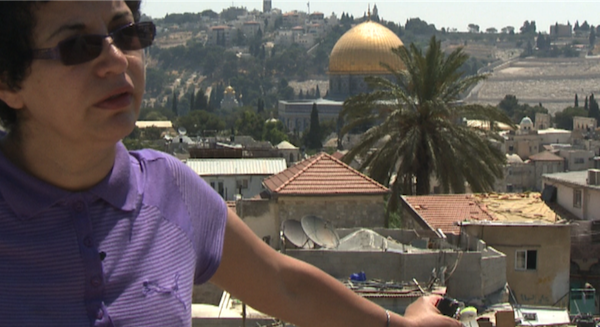 Majda el-Batsch on her rooftop with the Dome of the Rock in the background. Credit: Pierre Klochendler/IPS

OCCUPIED EAST JERUSALEM, Jun 5 2013 (IPS) - Majda el-Batsch was eight years old in June 1967 when she heard about the war that year. “I didn’t know what war meant,” she recalled. More than four decades later, the Palestinian reporter is still grappling with the meaning of what is known as the Six-Day War.

Yaki Chetz is 68 now, but in a way he remains a 21-year-old Israel paratrooper locked in a war whose outcome remains unresolved. From an old Jordanian bunker, he demonstrates a close combat situation accompanied by a battle cry: “You’re the enemy!” 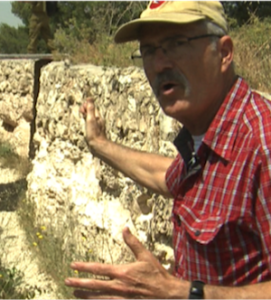 Chetz and el-Batsch don’t know each other – Chetz fought in the war, while el-Batsch lived through it – but both offer clear examples of how people still hark back to a war that left an indelible mark on Israelis, Palestinians and the region around them.

On June 5, 1967, Israel launched a pre-emptive war against Arab armies amassed on its border. Within six days it had captured East Jerusalem, the West Bank, the Gaza Strip (from which it withdrew unilaterally in 2005), the Sinai desert (which it returned to Egypt in exchange for a peace treaty signed in 1979), and Syria’s Golan Heights.

“We listened to the radio. Men painted windows in dark blue; women made bread,” el-Batsch recalled of the war. From her rooftop of her family’s house in the Muslim quarter of the walled Old City, one can scope out the lay of the land – Israeli flags; Al-Aqsa mosque, holy to Muslims; the Dome of the Rock holy to both Jews and Muslims; and the Western Wall revered by Jews.

El-Batsch can escape neither history nor her memories, such as her recollection of a heartening rumour that circulated among and gripped Palestinians trapped in the Old City at the beginning of the war. “‘The Iraqi army has come to save us,'” el-Batsch recalled people saying.

"No power that dominates other peoples lasts forever."
-- Majda el-Batsch

For Chetz, Jerusalem evoked a different sentiment. “Religious people nurtured feelings towards Jerusalem, but for us, soldiers, Jerusalem was just a border town,” he said.

Following Israel’s war of independence in 1948, East Jerusalem – including the Old City – was conquered and annexed by the Hashemite Kingdom of Jordan. The nascent Jewish state instated the city’s western sector as its capital, a situation that prevailed for two decades.

But on June 6, 1967, a battalion of Israeli paratroopers was assigned the mission to take over a strategic hillock dominating the no man’s land dividing Jerusalem. “The mission was Ammunition Hill – not Jerusalem, not the Old City,” Chetz emphasised.

After five hours of hand-to-hand combat, 105 Jordanians and 35 Israelis had died on the hill, 18 of them from Chetz’s platoon.

“I was so fearful,” Chetz remembered. “The Jordanians were waiting to kill us. I thought, ‘I’ve got only five metres to live.’ It was sheer survival. So many soldiers, friends killed. I felt desperate. I didn’t think about Jerusalem.”

As one of the last survivors of his platoon, Chetz became an accidental hero of the quasi-battle that sealed Jerusalem’s fate. By the time Israeli paratroopers entered the Old City, Jordanian defences of East Jerusalem had already been broken following the battle for Ammunition Hill, and so little fighting took place. “We entered the Old City without firing a shot,” Chetz recalled.

For the Palestinians, so great had been their confidence in victory that the shock of defeat was even greater.

“I remember my older sister telling us she’d seen an Israeli soldier, and the neighbours calling her a liar,” el-Batsch remembered. “[Palestinians] had heard the Egyptian president, Gamal Abdel Nasser, preparing them for triumph. They couldn’t accept being defeated twice – the catastrophe of 1948 and in 1967.”

So deep was the Israelis’ certainty of their annihilation, on the other hand, that the surprise of their military triumph aroused national elation, except amongst those to whom Israel owed its victory.

“We prayed at the Western Wall but, really, I felt terrible,” Chetz related.

It’s a sentiment echoed by el-Batsch. “People were in shock,” she noted, adding, “The Israelis were drunk with victory, exhibiting their tanks and warplanes.”

Two generations later, Israeli seventh graders sing a patriotic hymn that glorifies Chetz and his comrades’ self-abnegation, while the old battlefield has become a shrine that schoolchildren and conscripts visit to pledge their growing commitment to Jerusalem, according to Chetz.

He hailed a group of visiting soldiers, asking “What is Jerusalem for you?” The soldiers responded in unison, “Praise you, O Jerusalem, Israel’s capital for eternity! We honour thee, people of Israel!”

Chetz and el-Batsch live parallel lives with opposing expectations that do not intersect and probably never well.

“Jews can celebrate their traditions, but we, Christians, Muslims, must have a permit to reach our places of prayer,” protested el-Batsch. “That’s the logic of the occupation.”

Both Chetz and el-Batsch are secular, and both would probably agree that the Palestinian-Israeli conflict over Jerusalem is essentially nationalistic. Both wish for a two-state solution that will end the conflict. Both want peace.

Yet religion and historical sentiment are never far off. As he faced the Western Wall, Chetz noted that “3,000 years of history” connected him with the site, while el-Batsch adopted a different stance. “I don’t care about history or mythology. It’s not a matter of proving to me or me proving to you who lived here beforehand, but whether I can live with my rights in my own sovereign state,” she argued.

“Today, Jerusalem is united and annexed, and that’s a steady reality,” Chetz claimed, even as el-Batsch pointed out, “Israelis should learn from history. No power that dominates other peoples lasts forever.”

“We want freedom. You can’t come just because you’re a Jew and take our land,” she added.

No immediate prospects exist to reconcile Israel’s hold and Palestinians’ claim over East Jerusalem, even as both peoples believe Jerusalem is the cradle of their religion and their nation and that East Jerusalem belongs exclusively to them.

“I’m optimistic,” said Chetz. “I believe in peace – but not now. Meanwhile, Jews and Arabs will continue to live together. Jerusalem will be the same as today, with no borders again.”

“If you’re wise, compromise with me in peace, give me control of myself,” implored el-Batsch. “Stay on your side of town; I’ll stay on mine. Otherwise, there will be bloodshed again.”